Vladimir Putin and Kim Jong Un have met in Russia for their first summit together.

The two shook hands as they met in the far eastern city of Vladivostok on Thursday, with the Russian president saying he is “confident” the meeting will develop ties between their countries.

Mr Putin said he welcomed Mr Kim’s efforts to normalise relations with the US, despite talks between those two countries having stalled.

He also said Russia would like to help resolve the nuclear stand-off. 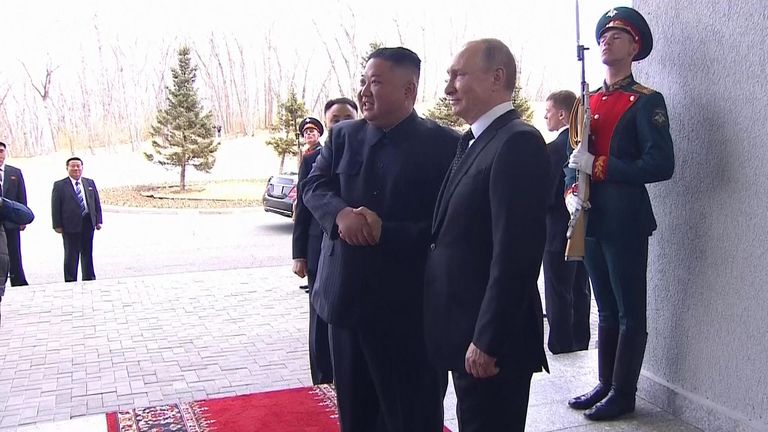 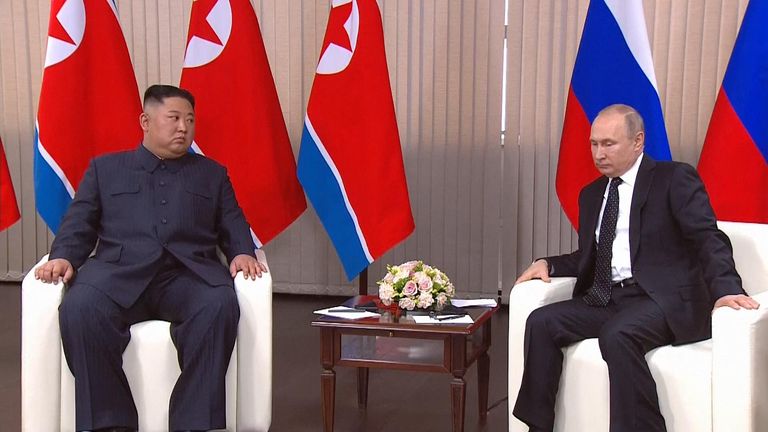 Mr Kim last met US President Donald Trump in February but the talks did not progress due to disagreements over US-led sanctions.

There have been no known high-level talks since and North Korea appears to have lost patience.

“We welcome your efforts to develop an inter-Korean dialogue and normalise North Korea’s relations with the United States,” Mr Putin told Mr Kim.

Last week they tested a new weapon and said they no longer want to deal with US secretary of state Mike Pompeo, calling for him to be replaced in discussions by someone “more mature”.

When he arrived in Russia, Mr Kim said he wanted to talk with Mr Putin about ties between their countries and the “settlement of the situation in the Korean Peninsula”.

He told Russia’s state-owned Rossiya-24: “I have heard a lot about your country and have long dreamt of visiting it.

“It’s been seven years since I took the helm, and I’ve only just managed to visit.” Mr Ushakov said Russia’s trade with North Korea fell by more than 56% last year because of sanctions against Pyongyang.

But there will also be some time for Mr Kim to meet “ordinary people” and a chance to try traditional Russian food such as pelmeni meat dumplings and caviar during his visit, according to reports.

The visit has seen an increase in security in Vladivostok, a city of more than 600,000, and local media say some platforms at the main train station will be closed for several days and buses diverted.

Vehicles have also been banned from the city centre and maritime traffic will not be allowed near the summit venue Russky Island.

And, korean, leade, North, Russian
You may also like: