South Australia's Chief Health Officer is asking casual contacts of a confirmed COVID-19 case to get tested after the man broke quarantine and went shopping.

The state recorded no new cases on Sunday, but Professor Nicola Spurrier called on anyone who visited three shops and a university campus to take a COVID-19 swab. 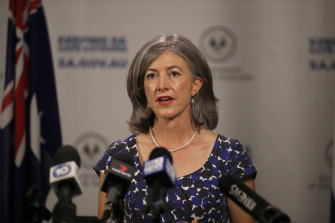 Professor Nicola Spurrier is asking people who visited the venues to come forward for testing.Credit:Getty

SA Health is asking anyone who visited the following four venues to take a COVID-19 test as a precaution.

The shoppers and university visitors are only considered casual contacts rather than close contacts, meaning they do not have to self-isolate for 14 days. A spokeswoman for SA Health could not say how many people visited these venues in the specified time period.

Patrons at a further four venues on November 22 were identified as casual contacts, but these people are only asked to monitor for symptoms and get tested if they arise.

"We will be obtaining credit card details and also some loyalty card information… so we can get messages directly out to customers," Professor Spurrier said.

"This is really critical at the moment for us here in South Australia to try and get rid of this COVID-19 incursion into our community."

South Australia recorded two new cases on Saturday, both of which were linked to the existing Parafield cluster.

Queensland is expected to announce on Monday whether it will ease mandatory quarantine restrictions on travellers from Adelaide.

The South Australian Premier said last week all cases of the state's outbreak have been linked to the Parafield cluster, meaning SA meets Queensland's threshold for reopening its border of 28 days without an unlinked case.

Meanwhile Victoria recorded its 30th consecutive day without recording a COVID-19 case, as the state celebrates its official elimination of the virus.

NSW recorded its 22nd consecutive day of no locally transmitted cases. There were four cases detected among returned overseas travellers in hotel quarantine.

breach, ca, quarantine, sa, sparks
You may also like: