‘We’re In The Money’ Sainsbury’s boss is a Glastonbury-loving, guitar-playing physics graduate who once sang James Blunt’s You’re Beautiful to a giant prawn in front of 5,000 staff (but friends say he doesn’t like the limelight)

Sainsbury’s boss Mike Coupe is a born performer who once sang James Blunt’s You’re Beautiful to a giant prawn to get the 5,000 watching staff to sell more seafood at Christmas, MailOnline can reveal.

Mr Coupe has said sorry after he sang ‘We’re in the Money’ from the musical 42nd Street in between TV interviews announcing his supermarket’s proposed £12billion mega-merger with Asda yesterday.

But it emerged today that Mr Coupe’s great passion away from work is music and he loves nothing more than ‘turning up the amp’ and playing rock guitar at home or going to Glastonbury most years – although the millionaire CEO doesn’t camp.

In 2009 he stunned 5,000 Sainsbury’s colleagues at a conference in Birmingham eight years ago with a live performance to boost sales.

He was trying to encourage staff to sell more seafood for Christmas and had hit on the idea of singing an adapted version of James Blunt’s hit, You’re Beautiful, to a colleague dressed up as a crustacean named Dawn the Prawn.

Facing Dawn he serenaded her with the words: ‘You’re beautiful…pink plump and tasty and so demure’, and added afterwards: ‘The crowd loved it’. 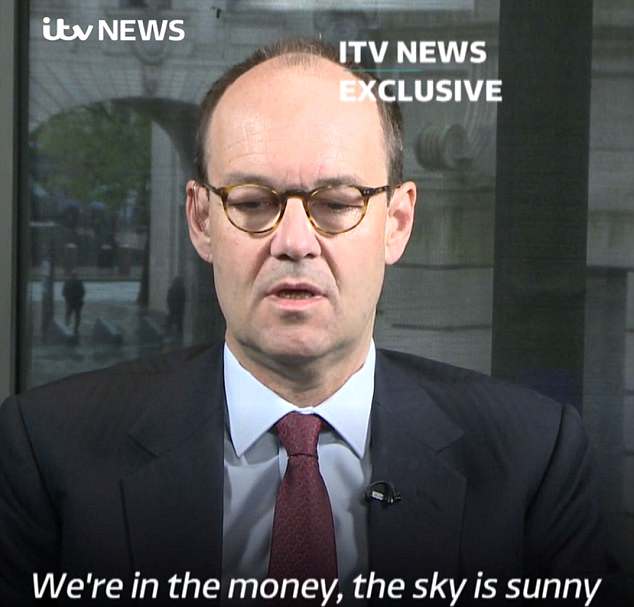 Mike Coupe’s impromptu performance of ‘We’re in the Money’ is not his first forray into the world of music having once sang James Blunt’s You’re Beautiful to a giant prawn to get 5,000 staff to sell more seafood at Christmas The video shows him singing the lyrics ‘we’re in the money, the sky is sunny, let’s spend it, lend it, send it, rolling along’ and as well as musicals he also like Mr Blunt’s music 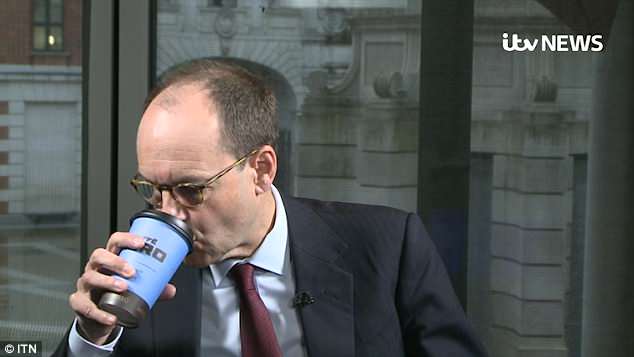 Yesterday he was forced into a humbling apology for his ‘unfortunate choice of song’ and the hiccup has been branded one of the worst PR blunders in recent history.

Mr Coupe was recorded singing ‘We’re in the Money’ from the musical 42nd Street in between TV interviews. 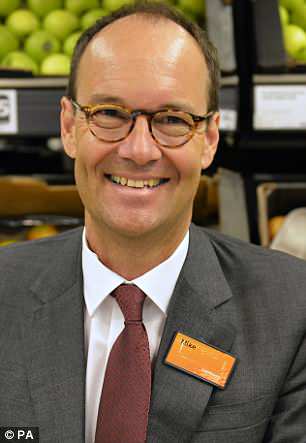 Mr Coupe’s stake in Sainsbury’s went up by by nearly £470,000 in a matter of minutes yesterday as news of the proposed merger with Asda was announced to the markets

Mr Coupe has a bonus pot of up to £8.6m coming his way in future years if he hits various targets.

In a clip released by ITV, he is shown singing: ‘We’re in the money, the sky is sunny. Let’s lend it, spend it, send it rolling along’ before taking a big gulp of his morning coffee.

Sainsbury’s shares rose 14.5 per cent yesterday as the City welcomed the deal and the rise pushed up the value of the chief executive stake in Sainsbury’s by nearly £470,000 in a matter of minutes.

Mr Coupe also has a bonus pot of up to £8.6m coming his way in future years if he hits various targets.

He said in a statement following the revelation that it was ‘an unguarded moment’ as he tried to compose himself before a television interview.

‘It was an unfortunate choice of song, from the musical 42nd Street which I saw last year and I apologise if I have offended anyone,’ Mr Coupe added.

Asked by Channel 4 News whether he will personally be in the money as a result of the merger and what is in it for him, he said: ‘I am a big shareholder in Sainsbury’s, my shareholding is a matter of public record, you can see how many shares I own.

‘It is unfortunate I was caught singing, as I say I was relaxing at the time – this is an incredibly stressful day and maybe it was an unfortunate choice of song.’

The Sainsbury’s PR department said last night that it was ‘preposterous’ to link his song choice to his own remuneration.

A spokesman said: ‘Mike was composing himself between interviews. As many of us do, he was singing songs to himself to clear his mind.

‘He recently saw 42nd Street, where this song is from and we all know these songs stay in your head. To attach any wider meaning to this innocent, personal moment is preposterous.’

Away from work his wife and two daughters in their early 20s live in York. He lives in London during the week and goes back north at the weekends.

He lets off steam by playing the guitar. ‘Occasionally I do go home and turn the amp up,’ he told the Mail last year. 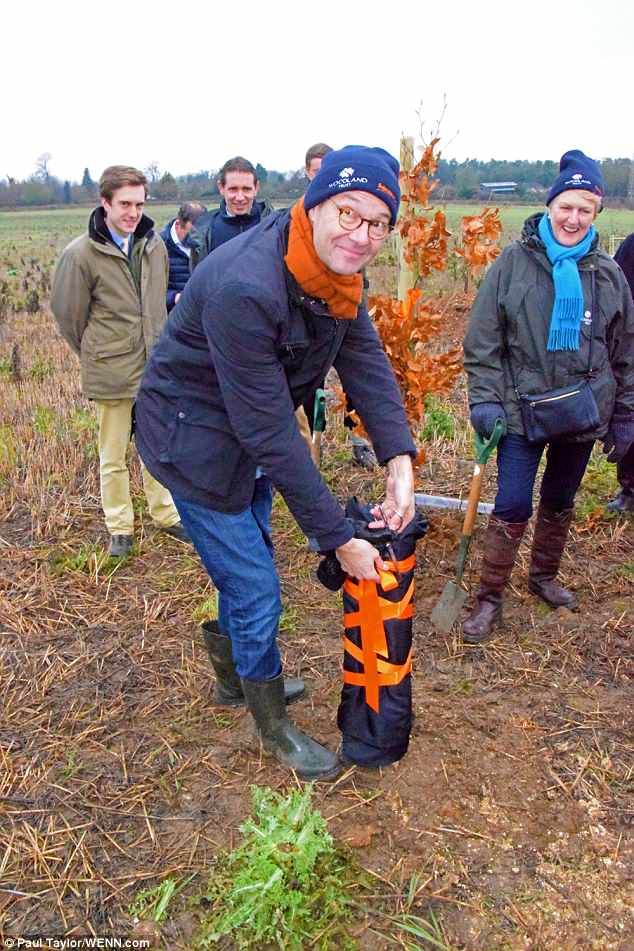 Mike Coupe, Sainsbury’s Group chief executive, plants a tree as part of a green initiative. Friends insist he is shy and had considered not taking the top job because the increased publicity 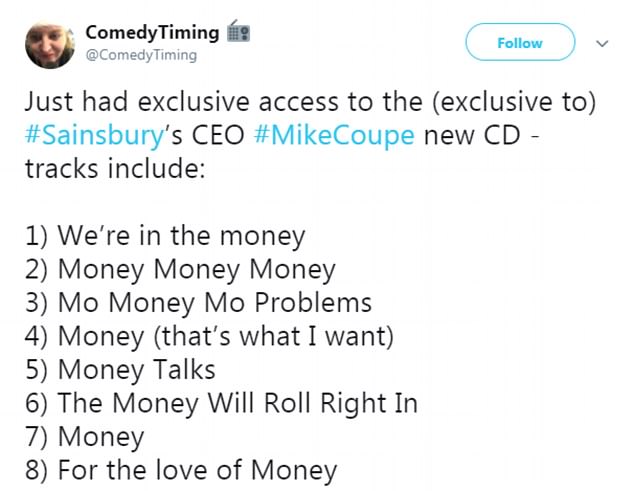 Music appears to have always been his passion and although he studied physics at Birmingham University he worked on the the science of music electronics in his final year.

The two year plot to create a £51 billion supermarket titan

Two years of secret talks culminated in the deal to merge Sainsbury’s and Asda into Britain’s biggest supermarket group with sales of £51bn.

The tie-up is the brainchild of Sainsbury’s chief executive Mike Coupe, who kicked off discussions in 2016 with an approach to former colleagues from his days as an Asda executive.

But the deal was only finalised on Sunday when Coupe, his chairman David Tyler and other executives gathered at the City headquarters of investment bank UBS, a key Sainsbury’s adviser. The agreement followed a rush of meetings, phone calls and transatlantic flights in the past few weeks as executives shuttled between Sainsbury’s offices in the City, Asda in Leeds and Walmart in the US.

Now a wave of consolidation could sweep the industry, with speculation mounting that Amazon could be prepared to make a bid for a UK supermarket.

Details of the deal emerged as Sainsbury’s revealed an 18.7pc fall in annual profits to £409m, with sales at stores open for more than 12 months growing by just 1.3pc.

The figures highlight the challenges faced by the big supermarkets from ultra-cheap German competitors Aldi and Lidl.

Describing his personality at work he said last year: ‘I’m introspective. I’m calm and measured. I very rarely get animated either way. I’m probably not enthusiastic enough when things go well. But then I’m not especially anxious when they don’t go well.’

He would have needed that calmness when in 2015 he was caught up in a bizarre legal drama in Egypt which has seen him sentenced in his absence to two years in jail.

The case related to what the supermarket refers to as a ‘historic commercial dispute’ dating back 14 years, before Mr Coupe worked for the company.

The charge apparently alleged a form of embezzlement but Sainsbury’s said it strongly denied all allegations.

In June 2015 Mr Coupe was able to prove he was not in the country at the time but he was automatically convicted in September after failing to attend court in Egypt and defend himself and the case was thrown out.

Raised in West Sussex to a scientist father, Coupe’s first taste of retail came when he took a job in 1982 with a Birmingham-based brassware company called Samuel Heath. He would load up his battered Ford Cortina with samples and tour the North of England flogging his wares while staying in run-down B&Bs.

A traineeship at Unilever followed, which saw him posted to a margarine factory in Sussex. But he found working for the sprawling consumer giant monotonous. Coupe lusted for something more entrepreneurial.

He took a job in the marketing department at Tesco, before moving in 1992 to become commercial director at Asda, where Justin King was one of his employees.

After that he spent three years at Iceland including an 18-month stint running the company, but when the frozen food supermarket came under new ownership in 2004 he found himself out of a job.

Fortunately, King offered him a post as trading director at Sainsbury’s, leaving Coupe now working for his former charge.

When King departed, Coupe hesitated about applying for the top job. A dedicated family man, he’s been married to wife Jill for 28 years and has two grown-up daughters. Running a FTSE 100 company would mean increased publicity and at first he wasn’t sure the intrusion was something he wanted.

Home is an £800,000 terraced house in York, although such are the demands of his role that he spends the week in London and returns North each weekend. As his lean frame suggests, he keeps himself in shape by cycling to work most days.