School staff member in his 50s found dead in the grounds

A school staff member has been found dead in the grounds of a crisis-hit school just hours before pupils arrived for class.

The man, in his 50s, was found dead at Avon Valley School and Performing Arts College in Rugby, Warwickshire, as it was unlocked at 5.40am today.

Warwickshire Police have closed the school, which caters for 1,000 pupils aged 11-16, while investigations continue. 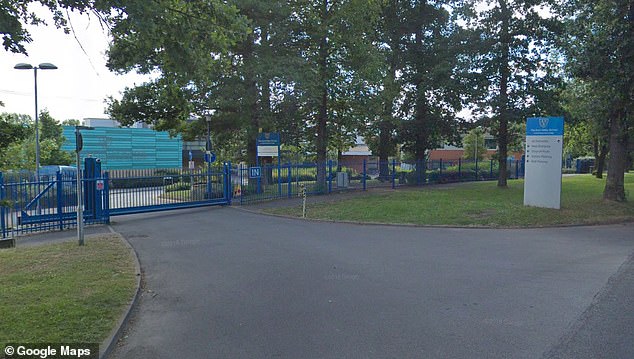 The man, in his 50s, was found dead at Avon Valley School and Performing Arts College (pictured) in Rugby, Warwickshire

The man’s death is not being treated as suspicious and his identity remains unclear.

Police were called to the school following concerns for the man’s safety.

Headteacher Alison Davies said: ‘It is with the greatest sadness that, following police advice, the decision has been made to close the school following the death of a colleague on the school’s site.

‘Early in the morning, as the school was being unlocked, a member of the school’s site team was found dead.

‘The police have been informed and have advised us to close the school for the day.

‘This is a huge shock for our entire school community and our thoughts and prayers go to our colleague’s, family and friends at this very sad time.

‘The school will be actively offering emotional support to staff and pupils who have been affected by the tragic incident in the days and weeks ahead.’

The tragedy is the latest in a string of problems at the school, rated ‘Good’ by Ofsted inspectors, stretching back more than a decade.

In June 2004 the original school building was destroyed after an arson attack.

A year later the school was rebuilt after receiving a £5million from the government.

But months after the official opening, a 21-year-old man was jailed for repeatedly stabbing a security guard.

In 2005 headteacher Mark Braine quit after disciplinary proceedings were taken against him.

Montrealers stand in solidarity with Wet’suwet’en

More than half of Canadians think 2019 was a bad year for Canada: Ipsos poll

While You Were Sleeping: 5 stories you might have missed, Jan 20

The diamond deal that rocked Angola