Schoolboy, 12, accidentally hanged himself in his bedroom

Schoolboy, 12, accidentally hanged himself in his bedroom while trying to ‘freak out’ his father after row over him playing for too long on his PlayStation

A tragic accident which claimed the life of a ‘much-adored’ schoolboy was an attempt to ‘freak out’ his dad after a row over video games, an inquest heard.

Dan Beal, 12, was found hanged after what senior coroner Martin Fleming described as ‘the row of the nation’ which ‘plays itself out throughout every household across the country’.

The hearing at Bradford Coroner’s Court heard how Dan came home at 4.15pm as usual on June 20 last year and the close-knit family sat down together to have pizza for dinner.

Afterwards, the Crossley Heath Grammar School pupil, who was from Birkby, in Huddersfield, played the PlayStation for 45 minutes. 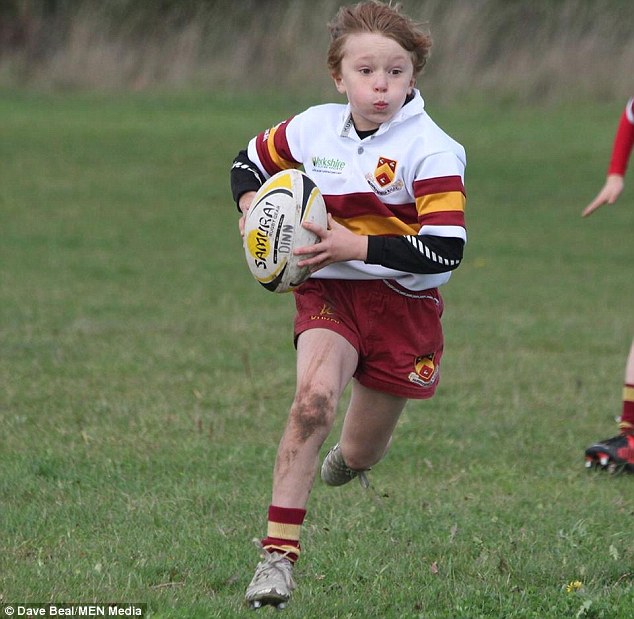 Dan Beal (pictured)  was captain of the Year 7 rugby team and in a family statement read out in court was described as ‘funny’, ‘sparky’ and ‘sporty’

His dad Dave told him to stop and when Dan, whose favourite video games included FIFA and Battlefield, was still playing it 30 minutes later he was told off again.

He went upstairs to do his homework in his bedroom and was due to come downstairs to watch Holby City with his parents – something they did together every weeknight – but he didn’t.

His dad said he thought it would be best to give him some more time to ‘cool off’ before going to invite him downstairs.

But when he went into Dan’s room he found the tragic scene.

Mr Beal, who had left a stressful job in 2003 to become the primary carer for his three children, said: ‘I believe Dan did this to try to freak me out and upset me.

‘I do not believe he wanted to kill himself. I believe it was all a tragic accident.’

He tried desperately to revive his son, while his mum Zoe called an ambulance, and Mr Beal said it was ‘all a bit of a blur after that’.

Sadly, Dan passed away in Leeds General Infirmary the next day, with the cause of death determined as a diffuse hypoxic brain injury as a result of hanging.

The grieving family, which also includes Dan’s siblings Ciaran and Martha, are still questioning why Dan went to such extreme and dangerous lengths.

In a statement read to the court, they said: ‘We will never know or understand exactly why our funny, sparky, sporty, interested and much-adored son and brother Daniel, who was so full of good-natured mischief and brimming with potential, took the step that he did on the evening of June 20 last year.

‘We are, however, as certain as we can be that the outcome of Daniel’s action was not what he anticipated and still less what he intended.’

Dan, who was captain of the Year 7 rugby team, had missed rugby at school that day because he forgot his kit.

Although his dad admits that Dan would ‘dwell’ on things he had done wrong and had a ‘glass half empty outlook to life’, he was ‘always determined’ and was looking forward to the future.

The day before he died he had even asked his mum to sign a permission slip for him to take part in a school open day.

The former St Patrick’s Catholic Primary School pupil was described as always doing well in school, was popular, played a range of other sports including football, cricket and basketball and even starred in school plays.

Mr Fleming said: ‘He was understanding in spirit and academically gifted.

‘He had so much promise and it’s no wonder his sudden death has devastated his family and all that knew and loved him.’

Even coroner’s assistant Bernard Tate broke down into tears as he neared the end of the family’s statement, which read: ‘Daniel, we will love and miss you always. You may be gone from our sight, but you will forever be a part of our family.’

There was a sense of relief in the small courtroom, where members of the Beal family were present, as the coroner recorded a verdict of accidental death.

More than a year on from Dan’s death, the family said: ‘The loss of our lovely boy is immeasurable and we do not have the luxury of simply turning the page and ‘moving on’.

Mr Beal set up a charity in his son’s memory, The DB12Foundation, which aims to share some of sporty and clever Dan’s qualities with his peers and the family are focusing on that in the future.

Dan also lives on as an organ donor.