Schools in Britain will start to open on June 1, the government has today announced.

In a briefing to the nation this evening, Prime Minister Boris Johnson said some primary schools will open at the start of next month, with secondary schools to provide ‘some contact’ from 15 June.

It comes after weeks of wrangling between the government and teachers unions over coronavirus safety concerns.

But today Mr Johnson said the phased reopening of schools was ‘crucial’ for children.

He also acknowledged it ‘may not be possible’ for all schools to reopen in the coming weeks.

‘The education of children is crucial for their welfare, for their long-term future and for social justice. 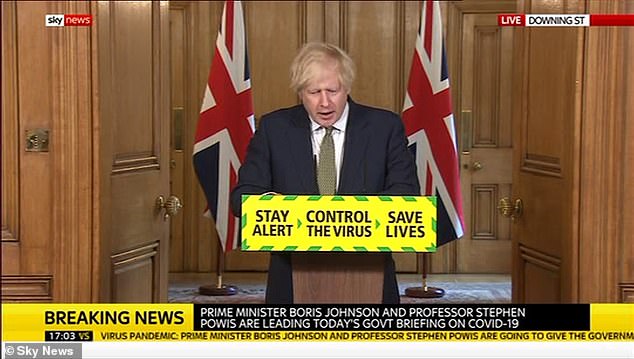 In a briefing to the nation this evening, Prime Minister Boris Johnson (pictured) said some schools will open at the start of next month, with secondary schools to provide ‘some contact’ from 15 June

‘In line with the approach being taken in many other countries, we want to start getting our children back into the classroom in a way that is as manageable and as safe as possible.

‘We said we would begin with early years’ settings and reception, year one, and year six in primary schools.

‘Today, I can announce it is our intention to go ahead with that as planned on June 1, a week on Monday.

‘We then intend from June 15 for secondary schools to provide some contact for year 10 and year 12 students to help them to prepare for exams next year, with up to a quarter of these students in at any point.’

Today’s announcement comes just days after union chiefs  told teachers to demand detailed answers to at least 169 questions from their bosses on issues such as bin lids, coronavirus counselling and employing extra staff to clean paint brushes, scissors and glue sticks before agreeing to return to school.

The National Education Union also told its 450,000 members to stop marking work and keep online tuition ‘to a minimum’ for any children still at home and not to try remote teaching if ‘they feel uncomfortable’ after going back to the classroom from next month.

The NEU’s gigantic list of demands included mapped locations of lidded bins in classrooms and around the school, full health and safety risk assessments for leaving doors and windows open while teaching and also asks: ‘What arrangements are in place to keep every classroom supplied with tissues?’.

Other queries from the NEU include: ‘Have families been told to provide water bottles?’ and suggests grilling bosses about bringing in more staff specifically for washing ‘resources for painting, sticking and cutting before and after use’ in classrooms and an official policy on how often pupils will be reminded to catch coughs and sneezes with a tissue or elbow.

The NEU’s safety checklist was previously hailed by many teachers.

But critics described the 22-page document as a ‘barrier’ to reopening primary schools in England from June 1 because it appears impossible to answer all the questions before then and may spook headteachers who fear their own staff could take them to court.

on, open, Schools, start, to, will
You may also like: