Scientists behind a trial of coronavirus-sniffing dogs have issued a plea for worn T-shirts and socks from patients with tell-tale symptoms.

Researchers are attempting to train a team of six dogs to try and smell the deadly disease in a matter of seconds — even in people without symptoms.

Experts are now calling on people who have mild Covid-19 symptoms and are due to have a swab test or have been tested to help.

Volunteers will be asked to provide samples of breath and body odour by wearing a mask for three hours, and nylon socks and a T-shirt for 12 hours.

Claire Guest, chief executive of Medical Detection Dogs, added: ‘It is vital that we train our dogs to detect the odour of Covid-19 as soon as possible.

‘The latest travel disruptions further highlight the difference the dogs could make. Public support is essential in making this possible.

‘Anyone who assists us by providing samples will be playing a part in creating a fast, effective and non-invasive diagnosis for the virus and safer spaces for us all.’

She added that the dogs — four of whom are called Furby, Asher, Bumper and Florin — could be trained in as little as six to eight weeks.

Dogs are known to have smell receptors which are 10,000 times more accurate than those belonging to humans. 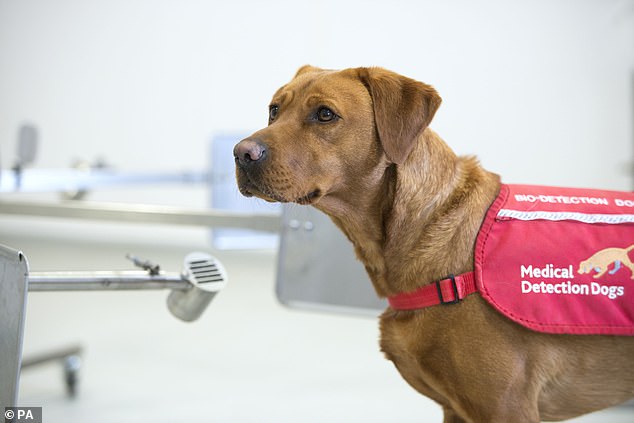 A new £500,000 trial (pictured, Florin) is underway to find whether dogs can sniff out coronavirus and scientists are asking people with mild symptoms to participate 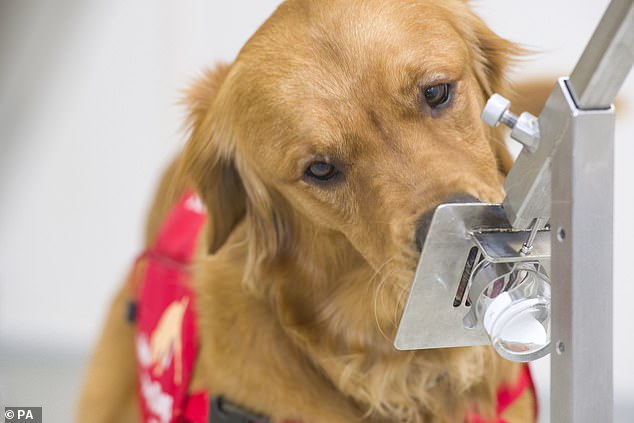 Researchers are training a team of medical detection dogs, three working cocker spaniels, a Labrador, a Labradoodle and a Labrador golden retriever cross (pictured, Bumper), to smell the deadly disease in 0.5 seconds

They can detect odour concentrations as small as the equivalent of one teaspoon of sugar in two Olympic-sized swimming pools.

Studies have already shown they can pick up on ‘volatile organic compounds’, which are released from the early stages of many cancers.

In the UK, there are already charities which use dogs to try and detect cancer by smelling people’s breath and to spot seizures in epilepsy patients.

HOW DO DOGS ‘SNIFF OUT CORONAVIRUS’?

Dogs are known to have smell receptors which are 10,000 times more accurate than those belonging to humans.

Because of this they are able to pick up on certain smells which are released in sweat.

For coronavirus detection, dogs are presented with some clothing worn by the person being tested which they then sniff.

In theory, they are then able to determine whether or not that person has coronavirus. It has been claimed that they are up to 92 per cent accurate.

Studies have already shown they can pick up on ‘volatile organic compounds’, which are released from the early stages of many cancers.

In the UK, there are already charities which use dogs to try and detect cancer by smelling people’s breath and to spot seizures in epilepsy patients.

But evidence is beginning to show that they may also be useful in spotting Covid-19, which has killed 700,000 people worldwide.

After sniffing 1,012 samples, German researchers reported that dogs they used had an accurate detection rate of around 94 per cent — with 157 correct positive identifications, 792 correct reflections of non-infected samples but 33 incorrect results.

Professor Maren von Köckritz-Blickwede, who took part in the German research, said: ‘We think that this works because the metabolic processes in the body of a diseased patient is completely changed.

‘And we think that the dogs are able to detect a specific smell of the metabolic changes that occur in those patients.’

While it is unclear exactly how dogs are able to detect the virus, it seems they are able to do so with 94 per cent accuracy.

But evidence is beginning to show that they may also be useful in spotting Covid-19, which has killed 700,000 people worldwide.

Dubai International Airport has introduced the use of sniffer dogs who are capable of detecting coronavirus among passengers within minutes.

Officials say the dogs are 92 per cent accurate at spotting the illness, which can take days to cause any symptoms.

And last month German researchers trained an army of dogs to distinguish between samples of fluids from patients infected with SARS-CoV-2 and healthy donors.

The new trial in the UK — which will cost around £500,000 — is being led by a team at the London School of Hygiene and Tropical Medicine.

People in the north west — where there has been a recent rise in cases — are being asked to contribute as the study is being done in collaboration with Durham University but it is open to anyone.

Researchers hope to collect 325 positive and 675 negative samples, in order to be able to fully test the dogs for accuracy.

Samples from NHS volunteers and their families are also being collected, according to the team.

London School of Hygiene and Tropical Medicine researchers will then analyse the samples to identify compounds in odour that signify when someone is infected with Covid-19.

The samples will then be sent to the Medical Detection Dogs’ training centre in Milton Keynes where the animals will undergo training to identify the virus samples.

Professor James Logan, project lead, said: ‘If successful, this trial could revolutionise how we diagnose the virus.

‘Rapid screening of high numbers of people, even if asymptomatic, will help return our lives back to some sort of normality.’

It is hoped that if the trial is successful the dogs can be used at UK airports to screen people arriving from abroad.

Ministers have reportedly already been in discussion with charities over rolling out armies of sniffer dogs in British airports.

The researchers estimate the animals could potentially screen up to 250 people an hour.

Professor Steve Lindsay, of Durham University — which is also involved in the study, said the dogs could be a ‘game-changer’.

He said: ‘We will then be able to scale-up the use of dogs at ports of entry to identify travellers entering the country with the virus.’

Professor Lindsay said this could be very important to help prevent a second wave of the epidemic, which experts fear may be inevitable.

German researchers who trained dogs to sniff out Covid-19 last week said they were ‘amazed’ at how quickly they could learn to spot samples from infected patients.

Coro, doing, of, scientists, trial
You may also like: