Sentences for people who cough in the faces of key workers could be DOUBLED and they must ‘face the full force of the law’, says Priti Patel

Priti Patel today warned that people who cough in the faces of key workers during the coronavirus outbreak could see their prison sentence doubled.

The Home Secretary confirmed she is considering increasing the punishment for such offences from one year to two years.

There have been numerous reports of people coughing in the faces of emergency service workers on purpose in recent weeks.

Ms Patel said anyone found guilty of such an assault must face the ‘full force of the law’. 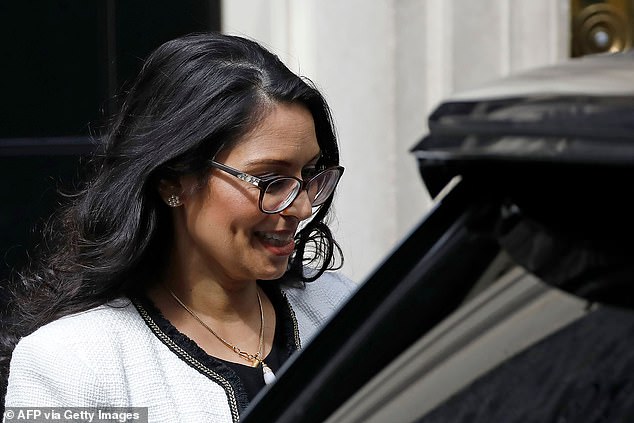 Priti Patel, pictured in Downing Street on May 14, said today sentences for assaults on emergency workers could be doubled

A new law introduced in 2018 increased the maximum sentence for the offence of common assault or battery on an emergency worker from six to 12 months.

But a rash of offences during the current crisis has prompted Ms Patel to weigh up whether the current punishment is enough of a deterrent.

During an appearance on LBC Radio this morning, Ms Patel was asked what should happen to people who cough in the face of police officers and other essential staff.

The Home Secretary replied that they ‘will feel the full force of the law’.

Asked what that actually means Ms Patel said: ‘And that’s rightly so. Well we’ve seen some people be convicted and rightly.

Pushed on whether the sentences should be increased, Ms Patel said they could soon be doubled.

Replying to host Nick Ferrari, she said: ‘So Nick you know that I am looking at that right now.

‘We’re on our fourth piece of legislation in four weeks. We are doing more, particularly around assaults on key, on emergency workers and on police officers.

‘I’m looking to double the sentences and we’re going to do that. I’ve been absolutely clear with the police about that.

‘I speak to the police about this every single week. We are going to do that.’

coughing, for, in, sentences, the
You may also like: