Former NSW RFS Commissioner Shane Fitzsimmons has been announced as the state's Australian of the Year and is now in the running to take out the top prize in January.

Mr Fitzsimmons became a familiar face for Australians as he led the country through the 2019-20 bushfire season and was announced as the winner on Monday night at a ceremony at Luna Park. 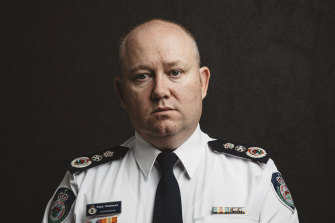 Fitzsimmons became a familiar face for Australians during the through the 2019-20 bushfire season and was announced as the winner on Monday night at a ceremony at Luna Park. Credit:Cole Bennetts

"The people of NSW trust and respect Shane and he is worthy of being our Australian of the Year.”

Mr Fitzsimmons announced she would step down from the role as RFS NSW Commissioner in April to head up new crisis agency Resilience NSW, which works to prepare the government for challenges such as bushfires and COVID-19.

At the time of his departure, Mr Fitzsimmons had been in the top role at NSW RFS for 12 years. He was superseded by Rob Rogers who was confirmed as Mr Fitzsimmon's replacement in July.

The oldest survivor of the Stolen Generation, Aunty Isabel Reid, was named the NSW Senior Australian of the Year at the ceremony.

“The NSW Australian of the Year recipients for 2021 have gone above and beyond to make a difference to their community,” Ms Berejiklian said.

“The past 12 months have been the most challenging in living memory and we should all be proud of the recipients and grateful for their passion, resilience and leadership."

Au, Fitzsimmons, named, NSW, Shane
You may also like: