A group of beachgoers have been slammed on social media after filming a shark that washed up on shore instead of calling authorities that could properly handle the situation.

Footage shows holidaymakers standing around the shark while filming on their phones as the waves push it further onto the shore at Aptera beach in Crete, where only a month before tourists waded through deep water to help a stranded dolphin.

As the waves roll in some of the group appear scared of the fish and can be seen running from the blue shark as others stand and watch.

The weak shark floundered and slowly rolled onto it’s back unable to moveas one of the onlookers can be seen preparing a rope to take it back out to sea.

In the next shot we see the shark back out at sea after a swimmer reportedly grabbed it by it’s tail and pulled it back out.

The blue shark usually preys on smaller fish and squid. It was eventually pulled back out to sea by a brave swimmer

Online commentators criticised those who stood around for not calling the Port Authority of Chania who were qualified to deal with the situation.

One said: ‘Bravo to the person who put the fish back but could have been dangerous.’

Another said: ‘How could they watch the poor fish struggle for so long?!!’

Professor of Ichthyology at the Department of Biology at the University of Athens, Persefoni Megalofonou, said that the fish was a blue shark (Prionace glauca). 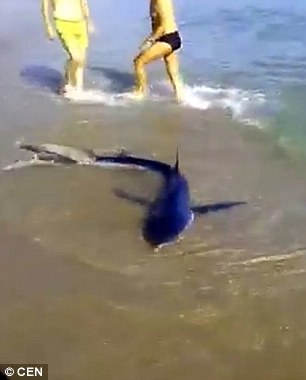 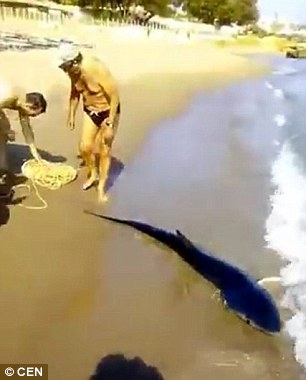 The shark can be seen floundering and struggling to stay in the water as tourists stand around and watch, seemingly afraid to approach the struggling fish

He said: ‘It is a shark of the oceans and the Mediterranean, familiar to fishermen as it is often caught up in their nets. Often it ends up on the menu as it is considered a fish delicacy, despite being threatened with extinction.’

He added that although it was brave of the swimmer to pull the shark out to sea, the shark should have been handled by an expert as they can easily be injured when coming into contact with humans.

The blue shark can live up to 20 years, and feeds mainly on small fish and squid although they can occasionally attack larger prey.