Unusual photographs show a blissed out alpaca appearing to have a great time as his heavy coat is sheared away for the summer, giving him an altogether more slimline look.

Despite living in Innerleithen in the Scottish Borders – far cooler than their natural habitat – Steely Dan and 34 other alpacas at Velvet Hall Alpacas are being shaved to ensure they can withstand the unseasonable 80F heat.

The five-minute shearing process allows the alpacas to cool down, as their coats can be the equivalent of wearing four cashmere jumpers.

Enthusiasts Stuart Ramsay, 56, and wife Jean, 65, who describe themselves as hobbyists rather than professional farmers, started out in 2013 with four males – but they brought in some females and started breeding.

Mr Ramsay, who works as an engineer, said: ‘Some have four kilos of fleece on them, it’s like wearing three or four cashmere jumpers. 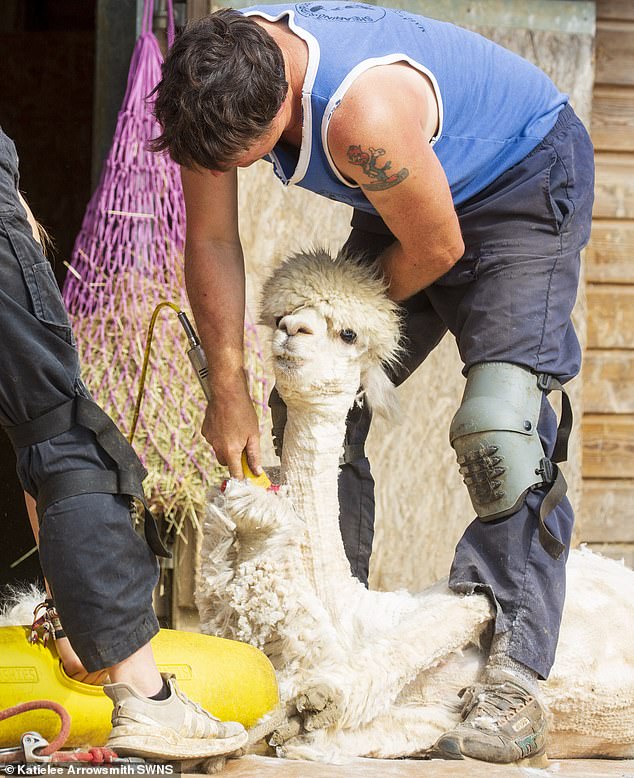 Steely Dan gets his coat sheared down his long neck by a professional shearer, flown in from New Zealand 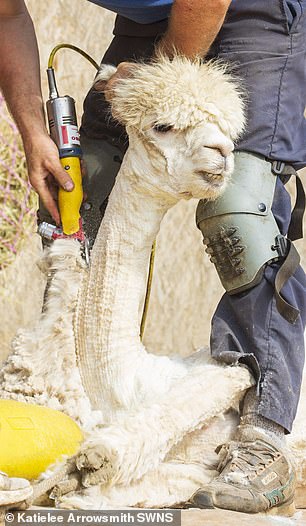 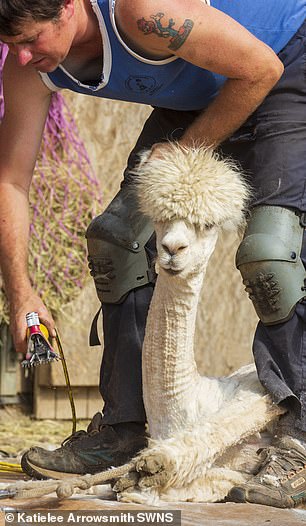 Gritted teeth: The alpaca seemed to be making some amusing facial expressions throughout the five minute shearing

Despite living in much warmer climes naturally,  the South American animals still need to be sheared to ensure they can withstand the Scottish Borders’ 80F summers 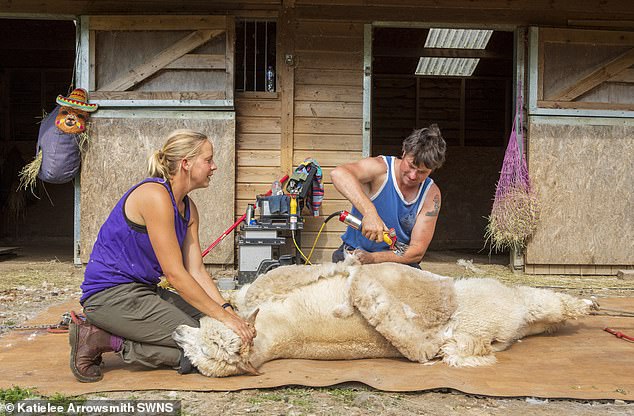 Each alpaca is expected to produce 7lb of wool this year, totalling more than 220lb which will then be sent away to hand spinners or a mill

‘It only takes about five minutes to shear them, it’s not long.

‘We started at 8am and should be finished by around 1pm. They will feel better afterwards.

‘We’ve got shelters for them and let them decide whether to come or go. 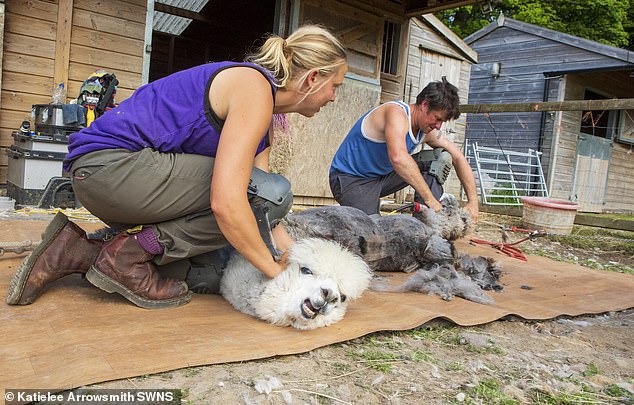 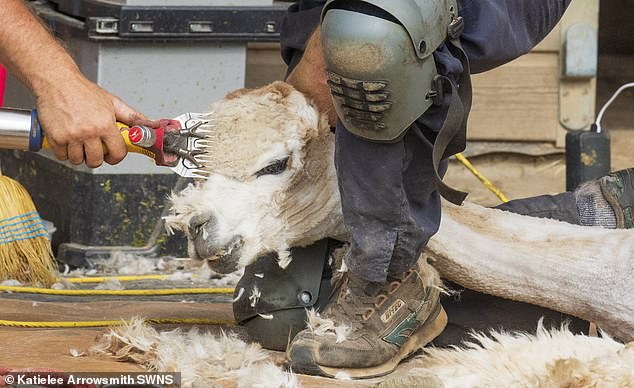 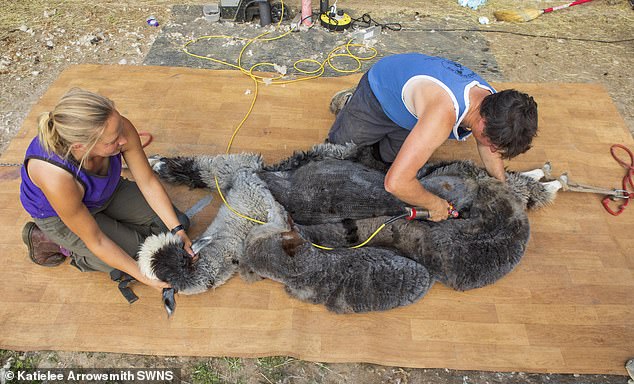 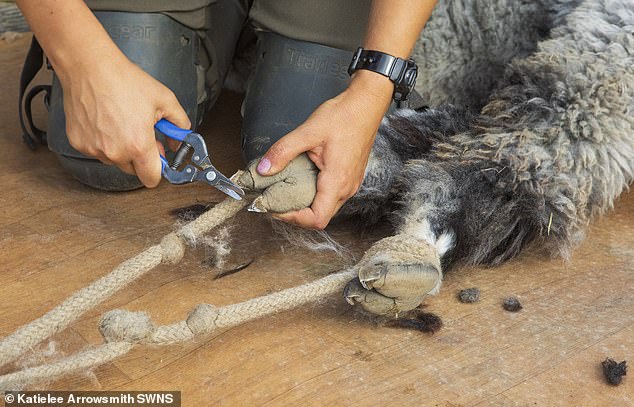 The couple employ a shearer from New Zealand who comes to the UK every summer to shear alpacas of their thick coats, which weigh around 7lb to 9lb each.

Each alpaca is expected to produce 7lbs of wool this year, totalling more than 220lb which will then be sent away to hand spinners or a mill, so the fleece can be turned into balls of wool to be sold.

Some are also sent to fleece shows who grade the wool and awards are issued based on the best quality coats. 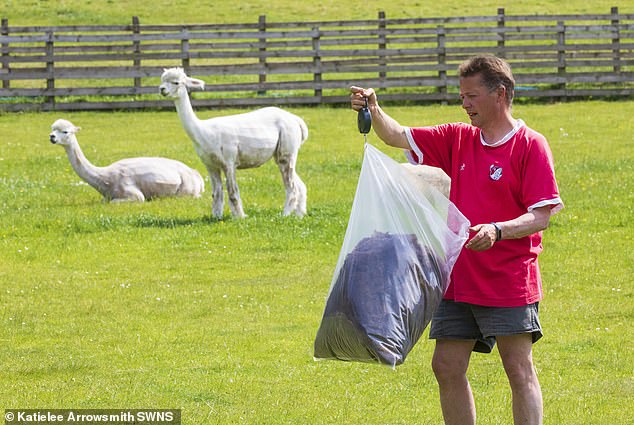 Stuart Ramsay weighs fleece from one of the alpacas. One of many bags of wool collected 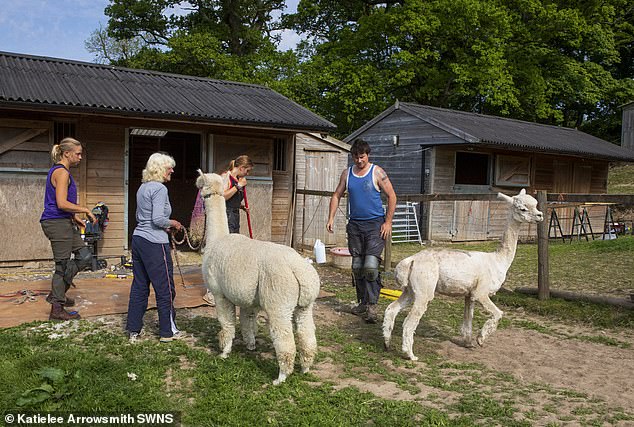 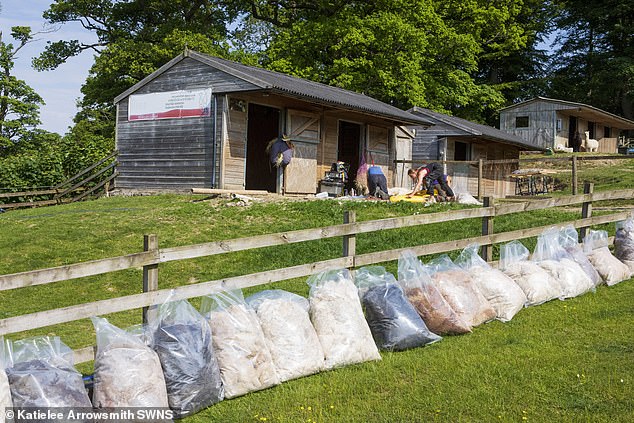 Here a variety of wool colours can be seen filling a dozen bags, the farm expects to collect 200lb of wool every year

The couple first came across alpacas at a country show in 2011 and fell in love with them, and decided to get four to graze their land and see how it would go.

‘It’s been a steep learning curve, but we got some females and started breeding and took it from there.

Alpaca, for, joy, loses, Shear, Who
You may also like: