A wealthy Silicon Valley angel investor is facing backlash over his privilege after he tried to create a ‘microschool’ in his backyard and looked for a teacher on Twitter offering a salary that will ‘beat whatever they are getting paid’.

Jason Calacanis, who lives is the Bay Area and invests in start-ups like Uber and Robinhood, posted an ad looking for ‘the best 4th to 6th grade teacher’ on Sunday to teach a group of young children at his home.

The father-of-one also offered a $2,000 UberEats giftcard as a referaral bonus.

He used the hashtag #microschool and said the teacher would teach two to seven students in his backyard.

However, the post was met with backlash on Twitter and he was criticized for exacerbating the privilege gap in education. 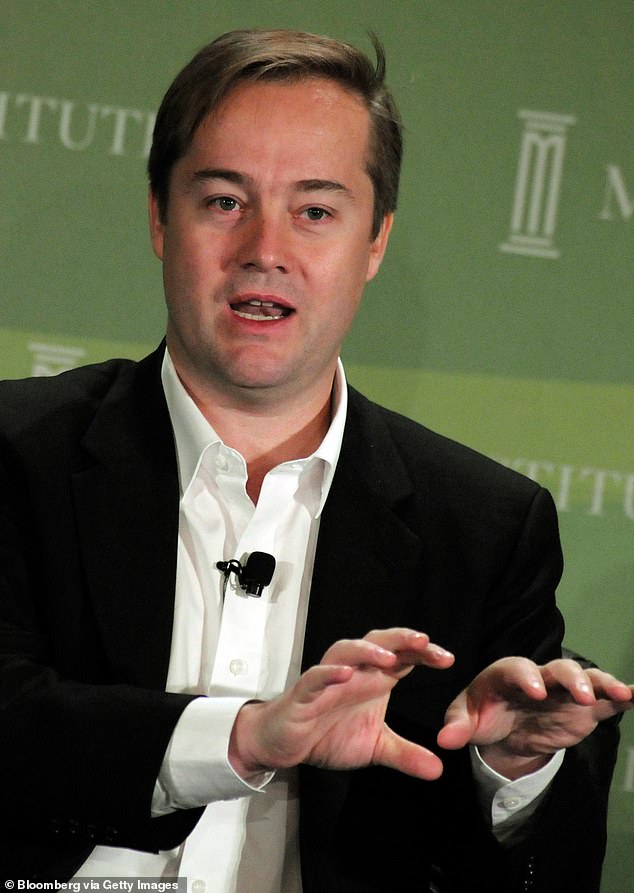 Calacanis, who lives is the Bay Area, is a well-known investor who has invested in start-ups like Uber and Robinhood

His proposal was a part of a new fad known as ‘learning pods’ or ‘pandemic pods’, a small group of students to gather to learn in a shared space whether by online school instruction or by a hired tutor to simulate a classroom dynamic amid the pandemic.

His Twitter was inundated with negative comments calling him out for his privilege.

‘You offering tenure? full benefits? a retirement package? summers off for prep and recharging? no? you’re just some dude who will give them a wad of cash if they don’t displease you? this isn’t how American education works, dude. you’re not a minor 19th century French aristocrat,’ one Twitter user replied.

‘Everything that’s wrong with the Bay Area all wrapped up in a nice little tweet,’ another added.

‘Rethink everything about your family’s priorities,’ Clara Jeffrey, the Editor in Chief at Mother Jones, replied.

‘YAY! Let’s use “free market capitalism” to utterly destroy the social fabric of society because, hey, F*** IT, we’re rich!’ another critic quipped.

Re-opening schools has been a heated debate across the country.

However, many Bay Area parents have already started to hire tutors and form learnings pods.

But the pods only add to concerns of widening inequities and racial and class disparities within school districts.

Last week Oakland Unified School District says that it does not endorse the formation of learning pods.

‘Although we appreciate parent resourcefulness in creating small “pandemic pods” to help manage the demands of this time, we do have some concerns,’ the district said in a statement.

‘Rethink everything about your family’s priorities,’ Clara Jeffrey, the Editor in Chief at Mother Jones, replied. 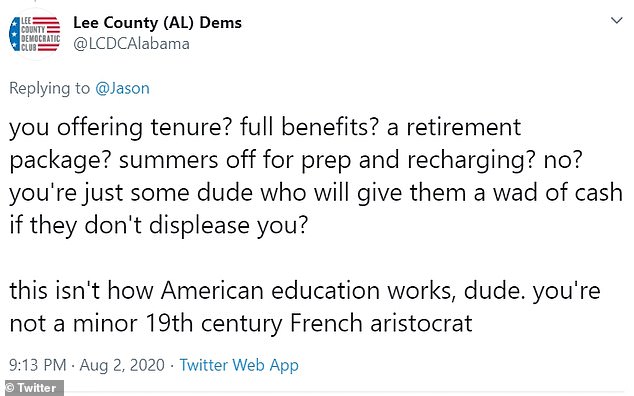 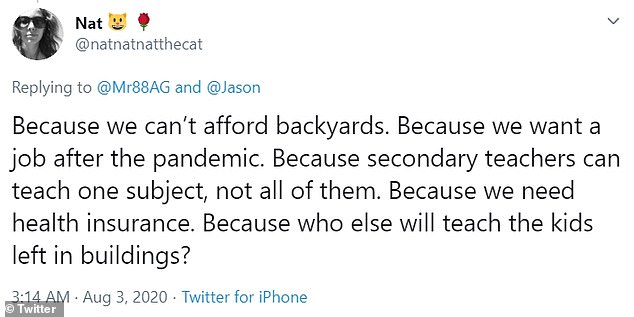 ‘I found a topic that is much more polarizing than wearing a mask—starting a school in your back yard,’ Calacanis tweeted Monday morning in the wake of the backlash.

Calacanis explained he wanted to start the microschool for his own young child.

‘We have a child in public school, we’re in the Bay Area. Schools are not going to open up. Our child does not learn well over Zoom. I’m not an expert on health, I’m not an expert on education, but I do have some expertise in starting entrepreneurial companies,’ Calacanis said to TMZ on Monday.

‘I decided I would put up a tweet and today’s tweet went viral. I think the applications we’re getting are from people who are not currently working so this would be a net new job for society and we’re going to give spots to families in need. In other words families who, like myself, was the product of the public school system in Brooklyn.

‘Of six kids, three will go to people for free,’ he added.

He defended his microschool idea despite backlash saying: ‘I think it’s a viable solution for kids who don’t have the ability to self direct like maybe a high school or college kid does.’