Skin-crawling moment spider wasp hauls tarantula back to its lair

This is the skin-crawling moment a spider wasp drags a paralysed tarantula across the road and back to its lair.

The tarantula hawk was filmed grasping onto its helpless prey in Eleuthera in the Bahamas.

In the stomach-churning clip, the wasp – whose species specifically targets tarantulas – holds onto the spider by one of its legs. 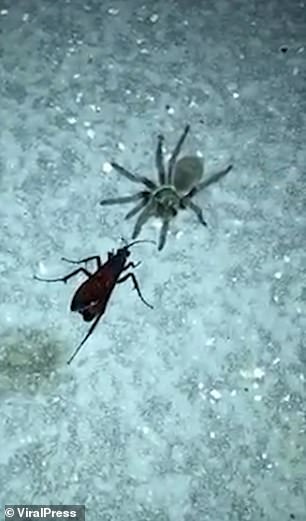 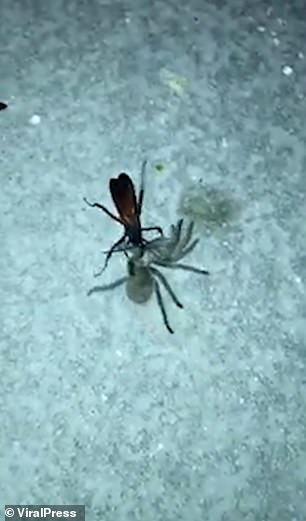 A skin-crawling clip has captured a tarantula hawk spider wasp dragging a tarantula across the ground in Eleuthera, the Bahamas

The winged creature then stops pulling its prey and climbs on top of it, before quickly casing out the perimeter surrounding its prey.

It then grasps a hold of the spider yet again and continues to pull it along.

Mr Hoefer said: ‘It looked like the spider hawk was dragging the paralysed tarantula over the road.’ 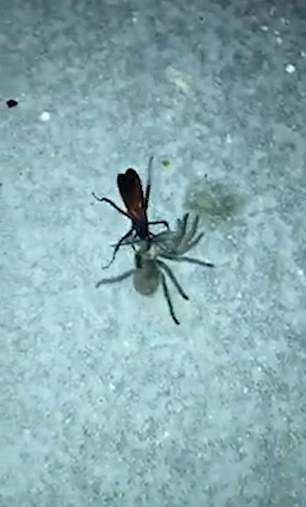 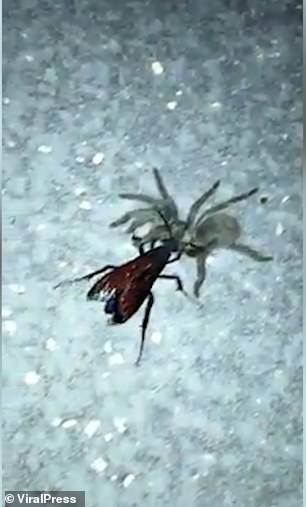 Biologist Sebastian Hoefer from Cape Eleuthera Institute captured the clip of nature at its grimmest on January 19. (Pictured above is the wasp dragging the spider’s corpse)

They have a potentially painful sting, but aren’t aggressive and are unlikely to attack humans.

There are many varieties of spider wasps around the world, including in Australia, Britain and North America.

What is a tarantula hawk spider wasp? 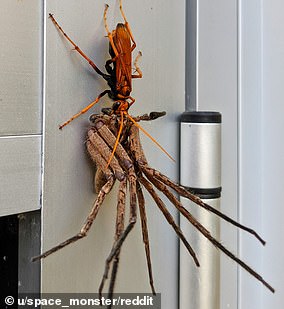 A tarantula hawk wasp drags off a spider in Roswell, New Mexico

A tarantula hawk is a type of spider wasp, also called Pompilidae.

They prey specifically on tarantulas.

They paralyse their prey by stinging it between the legs and drag it back to their burrow.

There, an egg is laid on the spider’s abdomen and the entrance to the burrow is closed-off.

When the larvae hatches, it burrows inside the spider to feed.

It avoids the creature’s vital organs so it stays alive for as long as possible.

The larvae then pupates and becomes an adult where it emerges from the spider as an adult.

Adults wish they had been taught how to save money and look after their mental health at school, survey reveals