Skippy on the menu as Victoria loosens rules for kangaroo shooters

Skippy will become a feature on Victorian dinner tables and barbecues after the state government authorised the sale of wild kangaroo meat for human consumption.

Under new rules to take effect on New Year’s day, potentially tens of thousands of grey kangaroos will be available for commercial harvesting as food. Locally-sourced meat has previously only been permitted for sale as pet food. 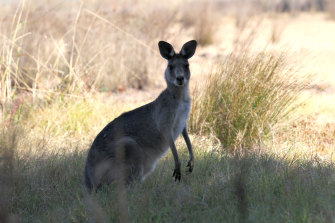 The move to put kangaroo on the plates of Victorians comes as the federal Department of Agriculture, Water and the Environment has also authorised the export of Victoria kangaroo products to foreign markets in a bid to boost the local industry.

It remains unclear how much meat will be available or its likely price as the Andrews government is yet to release kangaroo population and quota estimates for 2021 in the wake of the devastating bushfires earlier in the year, and delays in decision-making due to the pandemic.

“The 2020 survey of Victoria’s kangaroo population was delayed due to the coronavirus (COVID 19) pandemic,” a state government spokeswoman said.

“The data from the survey along with the 2021 Kangaroo Harvesting Program Quota Report are currently being finalised and will be released in January 2021.”

Up to 10 per cent of the wild population of eastern and western grey kangaroos — about 137,800 animals — have previously been available for culling each year under pest management and pet food harvesting programs. The commercial harvest quota for grey kangaroos was 60,000 in 2020.

The cull can only be conducted by registered shooters on private land, and the carcasses transported to licensed processors.

Victoria’s commercial cull was suspended following the 2019-2020 bushfires but has restarted in many regional areas. A prohibition remains in the Towong, Alpine and East Gippsland shires where a survey found up to 31 per cent of kangaroo habitats had been destroyed.

as, menu, on, Skippy, the, Victoria
You may also like: