Louey Kostromin, 37, was wanted on recall to prison when he was arrested at a probation office in Northampton on August 6 of last year.

But, as shocking CCTV footage showed, when three officers tried to detain him the yob launched into a frenzied attack.

He first punched one cop in the face before grabbing PC Callum Burke and repeatedly biting his ear.

The officer had half his ear bitten off during the attack and he needed eight stitches to patch it up.

Kostromin was jailed for eight years yesterday after he was found guilty of grievous bodily harm and assaulting a constable in the execution of their duty.

“Body-worn video of the officers shows they were patient and calm, when you punched one officer in the jaw,” she told Kostromin.

“The officers tried to detain you, but you grabbed one PC by the neck with your hand and launched an attack with your teeth, holding on for around 15 seconds.” 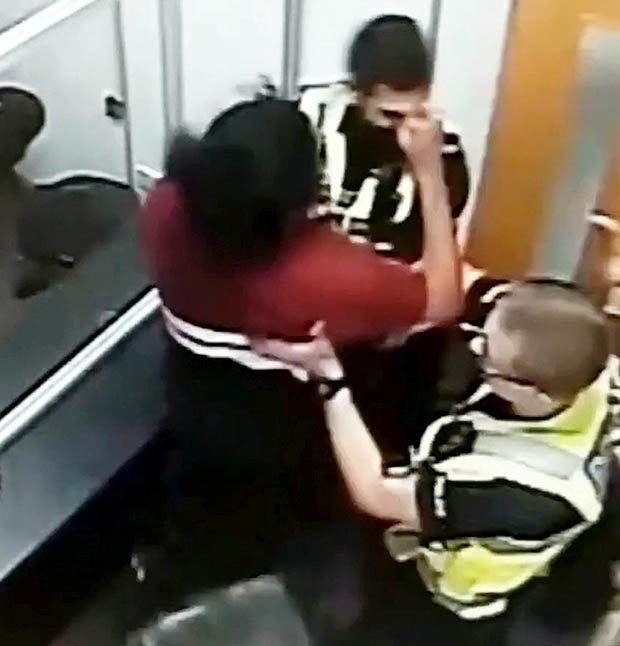 The court heard Kostromin had 39 previous convictions, including two previous assaults on police officers, possession of a samurai sword, possession of drugs and robbery.

Speaking outside court, Detective Sergeant Karl Curtis of Northamptonshire Police CID said the thug “employed his teeth as a weapon”.

“The officers showed commendable courage and professionalism in ensuring Kostromin was detained despite his feral behaviour, and it’s gratifying to see his sentence reflect both the seriousness of what he did as well as the considerable level of danger he poses to society,” he added.