Follow
Home » World News » Snatched from their mums, chained & tortured – how helpless monkeys are sold to 'slave schools' and even used for sex

Snatched from their mums, chained & tortured – how helpless monkeys are sold to 'slave schools' and even used for sex

SNATCHED from his mother as a baby, chained up alone and forced to work at a coconut farm for ten hours a day, all little Kulap knows is suffering.

The pig-tailed macaque is one of thousands of monkeys thought to be used as slaves on Thai farms – never knowing the freedom of the forest like they should, with their captors likely to work them to death. 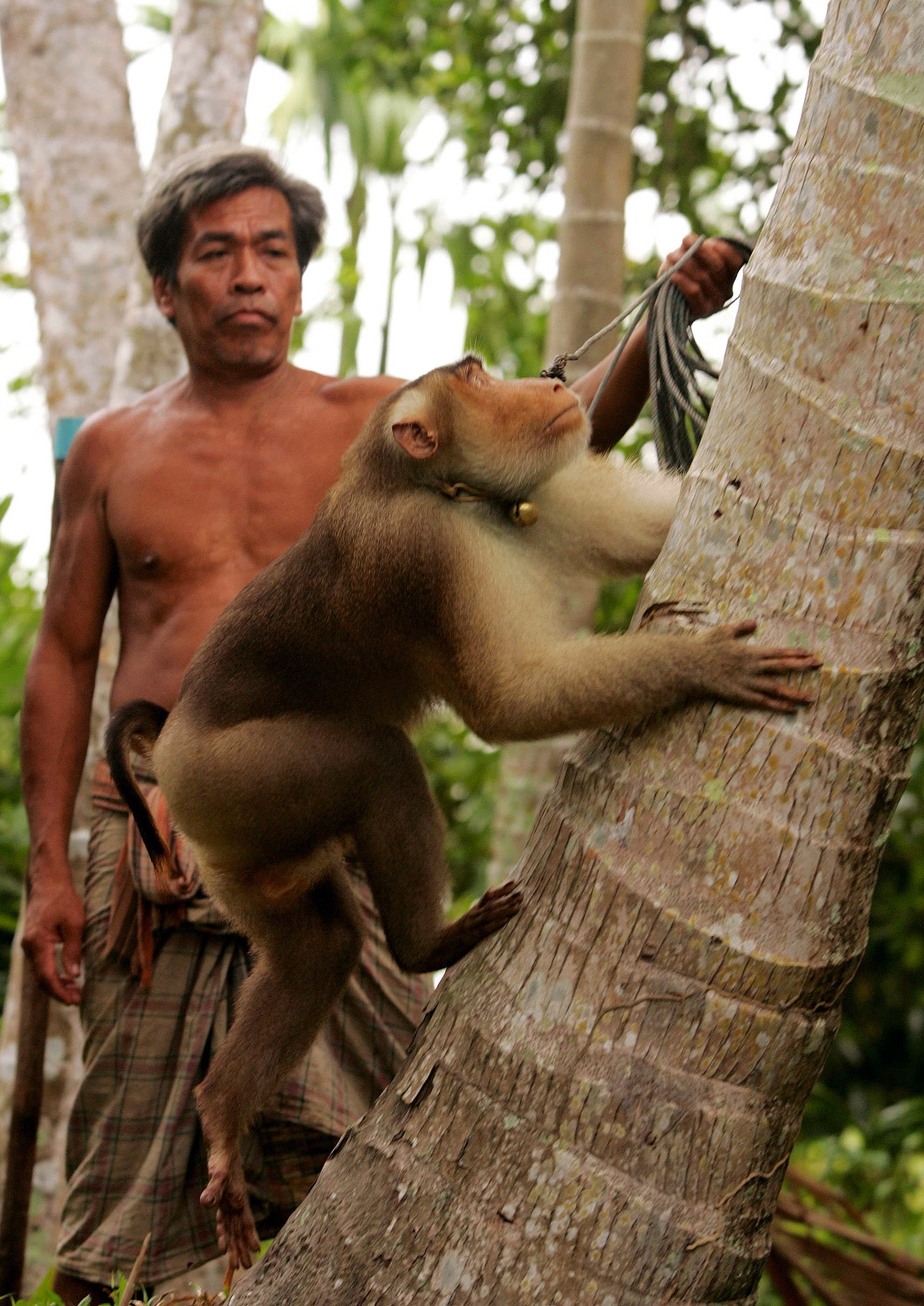 A shocking report from animal rights charity PETA last month revealed that these creatures are used in the production of common supermarket coconut products like oil, milk and yogurt.

With the milk market alone worth up to £315million worldwide, monkeys are made to scale 100ft trees and pick up to 1,000 coconuts a day.

Here, the Sun Online takes a closer look at the harrowing conditions these helpless animals are forced to live in – just for the sake of cheap labour.

‘Isolated and chained, they slowly lose their minds’

Thailand has long had a reputation for animal abuse exploitation, with tourists able to pay to ride captive elephants who are chained and beaten, and reportedly 'sedated' tigers are used as props for selfies in supposed 'sanctuaries'.

And sickening scenes captured on film give a real insight into the tragic life of a coconut farm monkey.

In footage taken by PETA Asia investigators who visited eight farms, one can be seen trapped in a tiny cage, frantically shaking the bars in a futile attempt to escape, while another desperately tries to run away from a handler.

The charity also visited four ‘monkey schools' – institutions where they are taken to be taught how to pick coconuts or perform as tourist entertainment.

Animals at these facilities displayed stereotypical behaviour indicative of extreme stress, with some driven to insanity, pacing the tiny patch of bare dirt they’re chained up on. 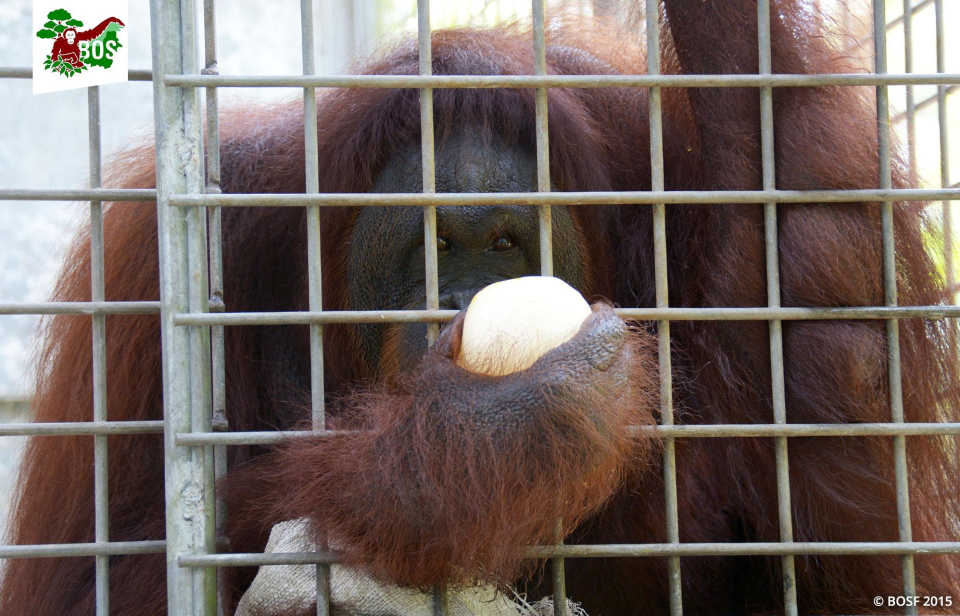 Jason Baker, senior vice president of PETA Asia, was the leading force behind the investigation, and toured coconut water farms to speak to workers about the use of monkeys for picking coconuts from huge trees.

“Monkeys are taken from their natural homes as babies, held captive, chained alone to tyres and old barrels, trained by force, and made to work under the threat of punishment," he tells Sun Online.

“They're fitted with rigid metal collars and kept chained or tethered for extended periods.

“Denied the freedom to move around, socialise with others, or do anything else that's natural and important to them, these intelligent animals slowly lose their minds.

“Driven to desperation, they pace and circle endlessly on the barren, rubbish-strewn patches of dirt where they're chained.”

The work they carry out takes a deadly toll. The life expectancy of a captive monkey in these conditions is 15, whereas in the wild they would be expected to live up to 25 years old. 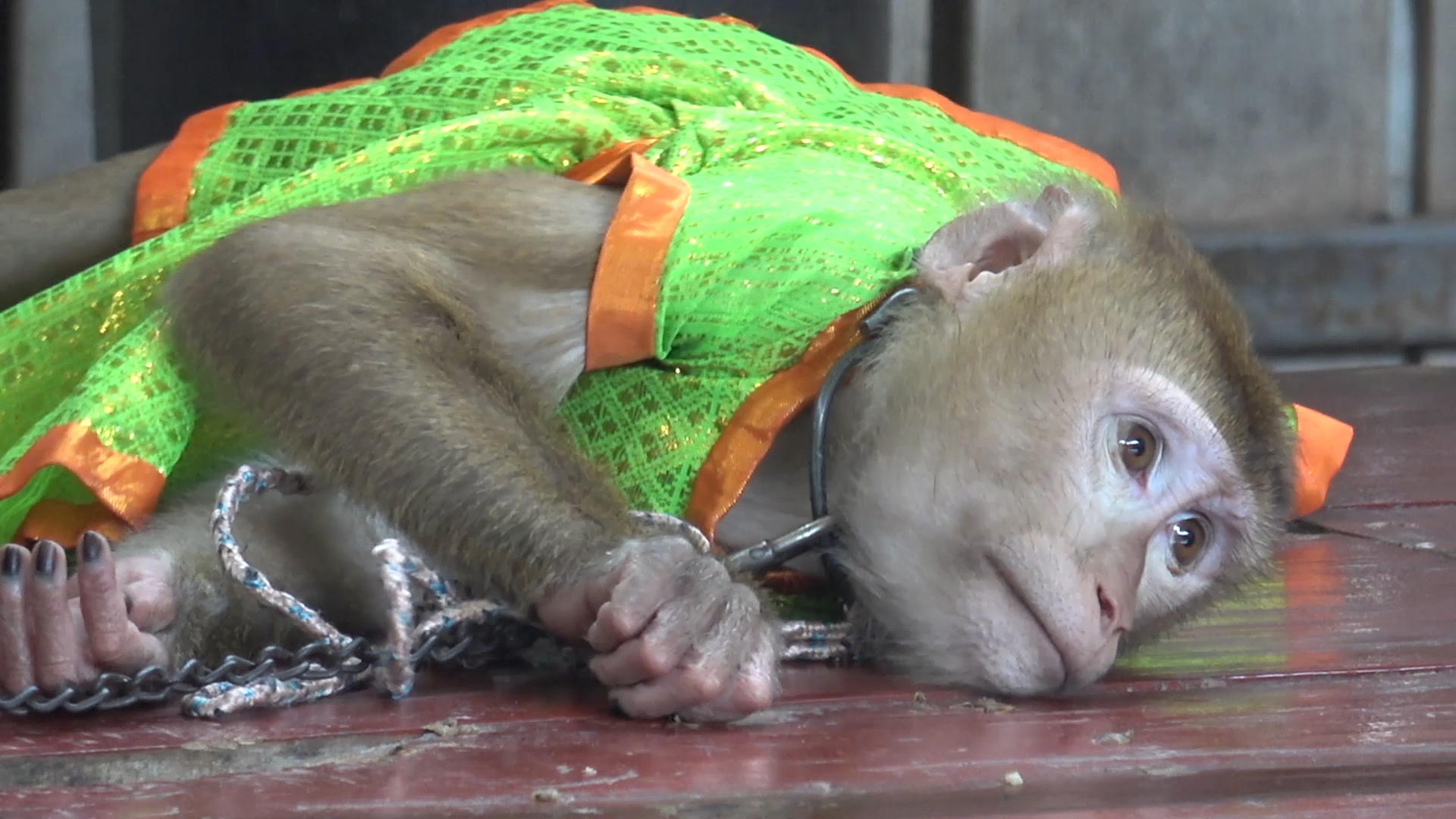 If they try to fight back and protect themselves, they’re beaten or tortured.

"The terrified young monkeys are forced to perform frustrating and difficult tasks, such as twisting coconuts until they fall off the trees from a great height, for six to 10 hours per day," Jason adds.

“One investigator learned that if monkeys try to defend themselves, their canine teeth may be pulled out.”

Forced to wear make-up and raped

Sickeningly, it’s not just exhausting farm work primates are forced to carry out.

In an exclusive interview with The Sun, former director of Borneo Orangutan Survival Foundation UK Michelle Desilets previously revealed the full horror of Pony – the female orangutan who had been forced to work as a prostitute for remote farm workers in Borneo. 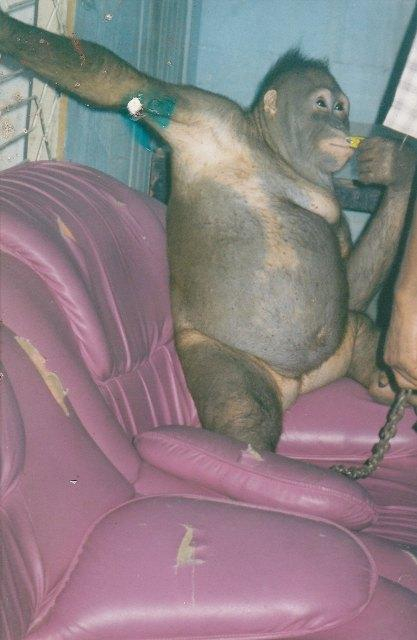 Chained to a bed, men could choose to pay to have sex with her – and she was shaved daily and made to wear perfume and jewellery.

Laying bare the sheer terror of Pony’s life, Michelle said: “It was horrifying. She was a sex slave – it was grotesque.

"She was covered in abscesses, and they put make-up and earrings on her. 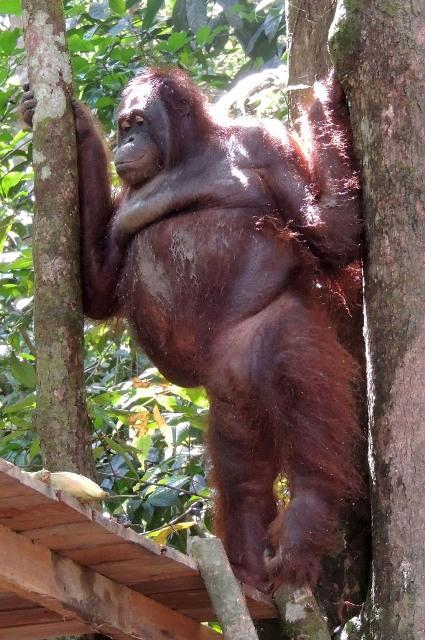 However, it took over a decade for Pony to recover from the unimaginable cruelty she suffered at the “brothel” village – a destination popular with local farm workers who used prostitutes.

While this was believed to be an isolated case, the cruelty doesn’t end there.

It is thought around 1,000 orangutans – whose name literally translates into English as “person of the forest” – are also killed every year, so their babies can be sold on the black market.

Dressed up in ‘cute’ outfits and forced to perform to tourists

While Pony’s particular case is hoped to be rare, more often than not, monkey slavery actually goes on in plain sight.

Many perform on Thailand's streets, where tourists fuel the industry by giving the monkey’s captors money for tricks to be performed, or pay for a selfie with exotic pets. 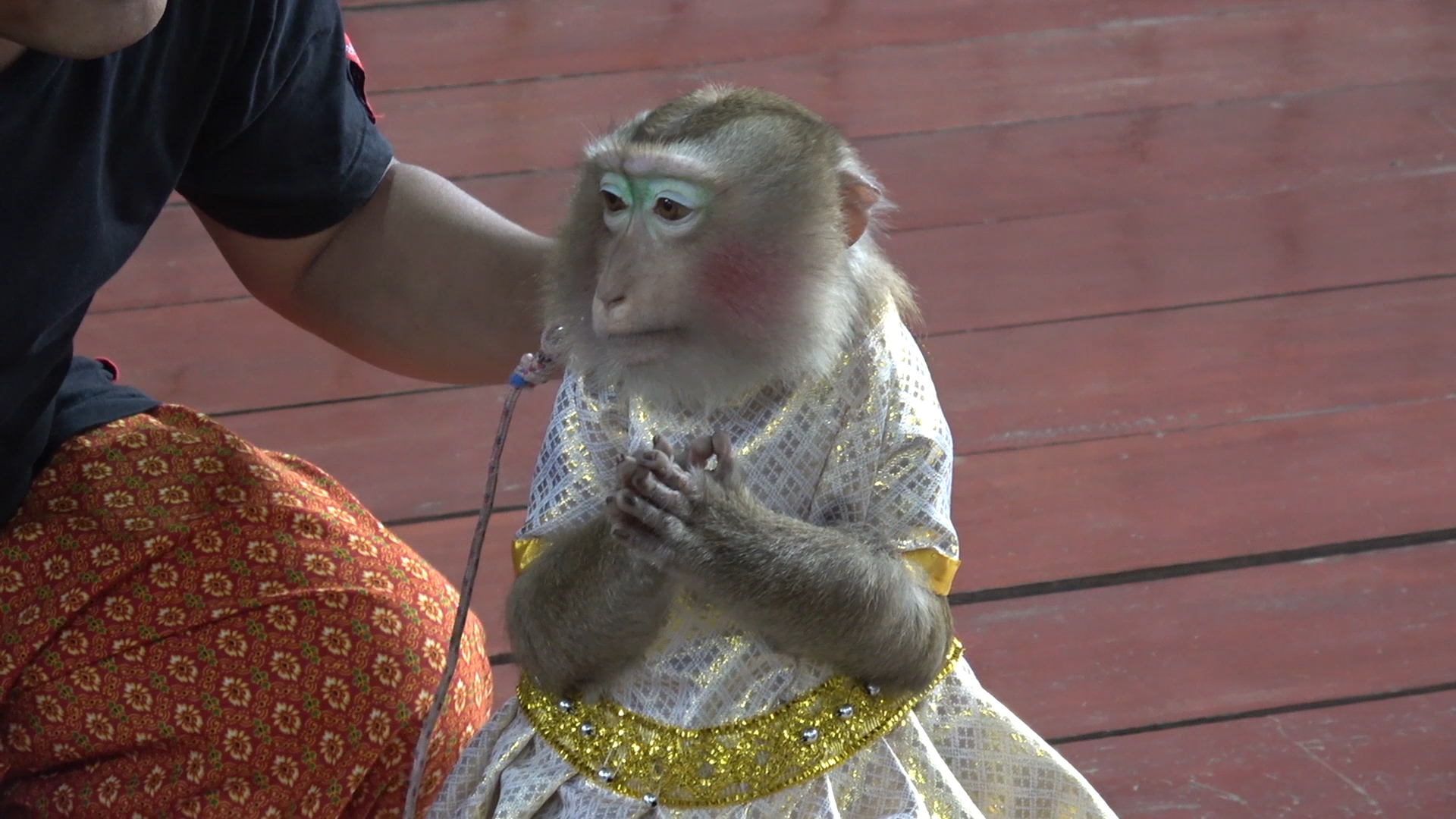 Trainers make their living by dressing the animals up in ‘cute’ outfits, before making them jump through spiked hoops for entertainment.

They control them by choking them with tight ropes around their necks while they sit on the shoulders of tourists for selfies.

Others have to spin a burning metal pole, mimic karaoke singers or play with coconuts by throwing them through hoops. 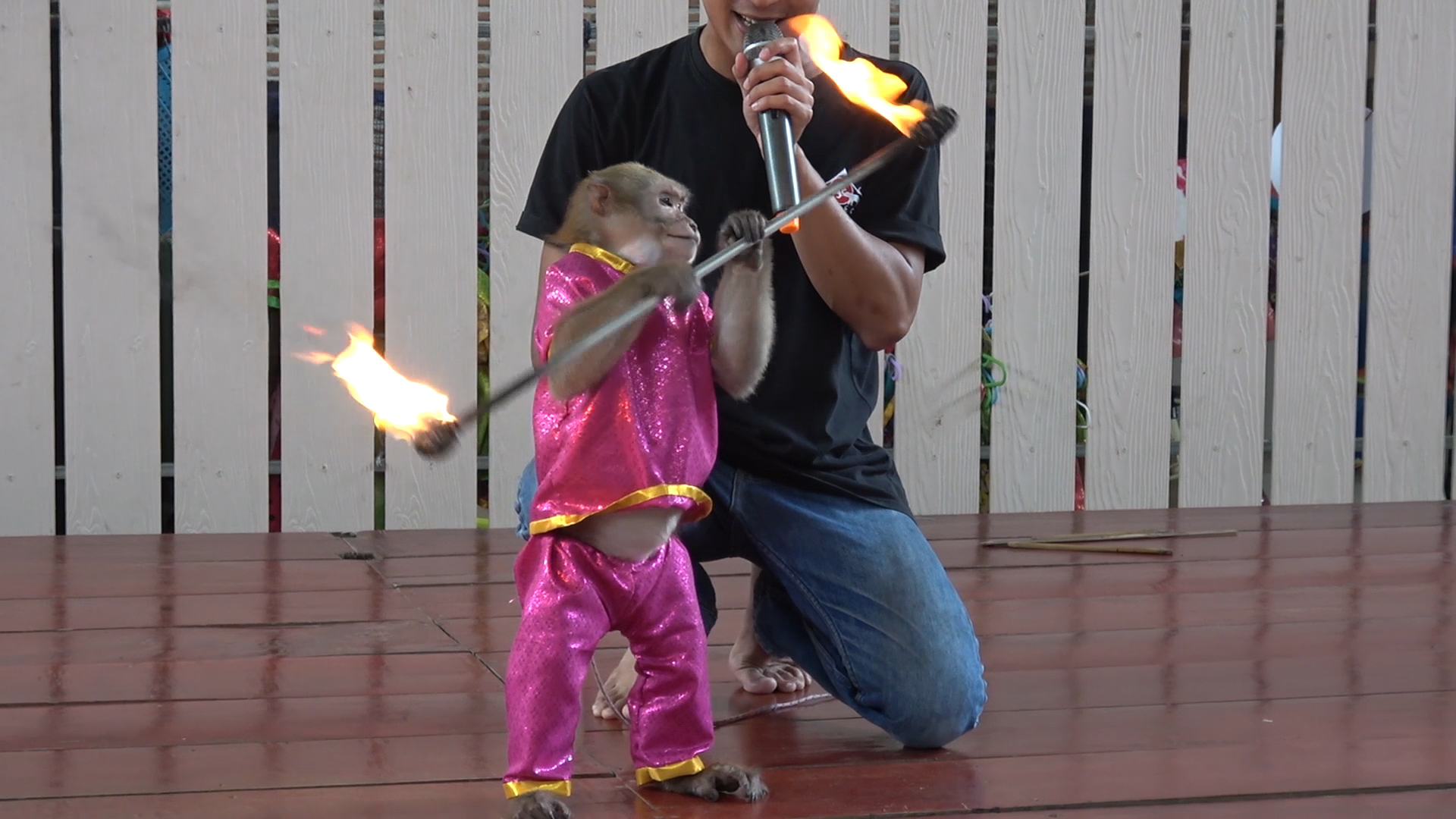 It’s a cruel industry but one many tourists will have encountered on their travels.

Writer Amanda Cox, 31, is just one of the many who has witnessed it first hand, while on holiday on the island of Ko Samui, in Thailand. 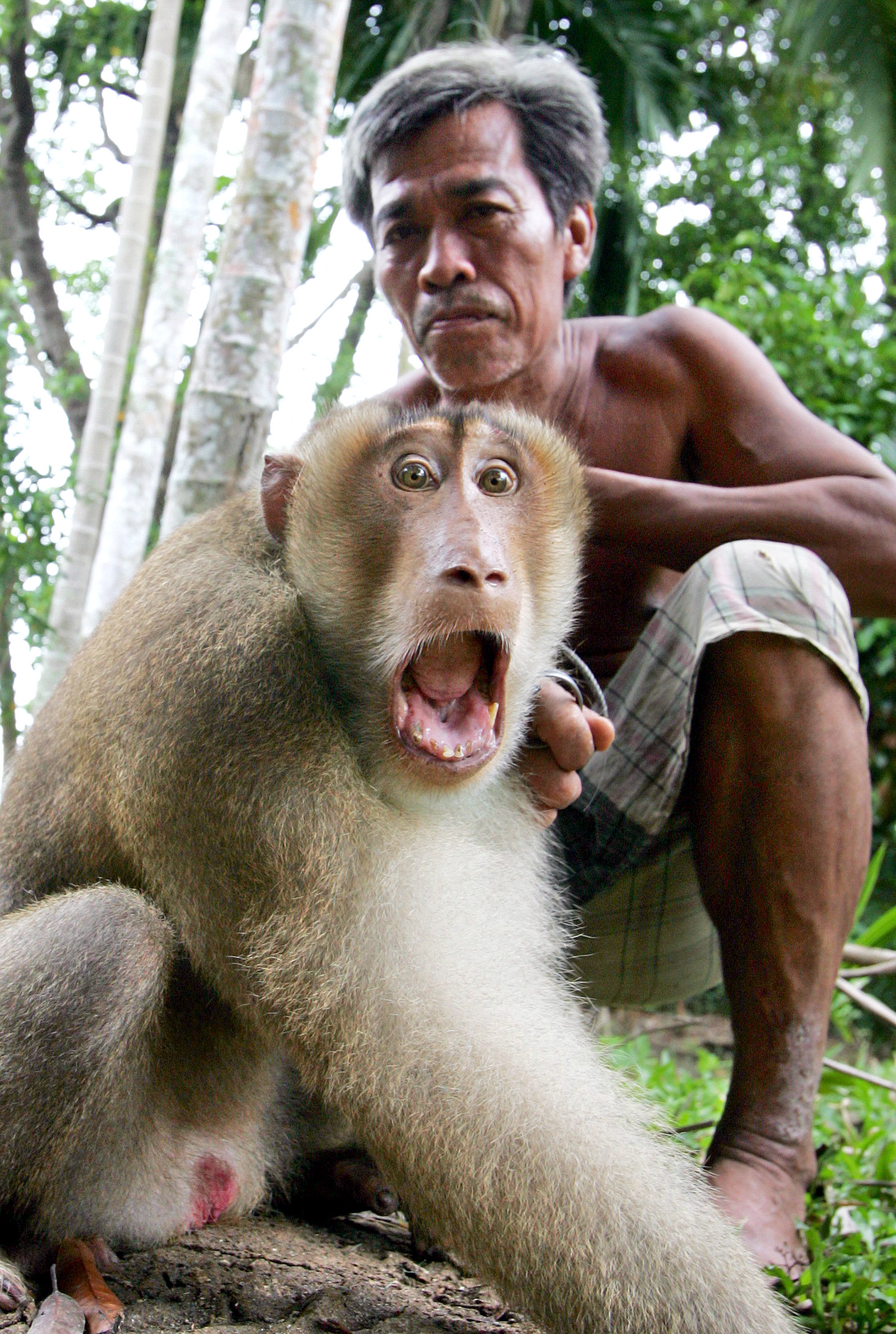 She says: “I was out for cocktails with my friend in a quiet bar, when suddenly a man approached us, with a monkey dressed up in a football shirt.

“The monkey had a metal chain around its neck that it kept trying to pull off, and it looked agitated, screaming at the man and baring its teeth.

“The vendor tried to force the monkey to sit on my shoulder, clearly so that he could take a photo and then try to charge us for it, but I flat out refused. 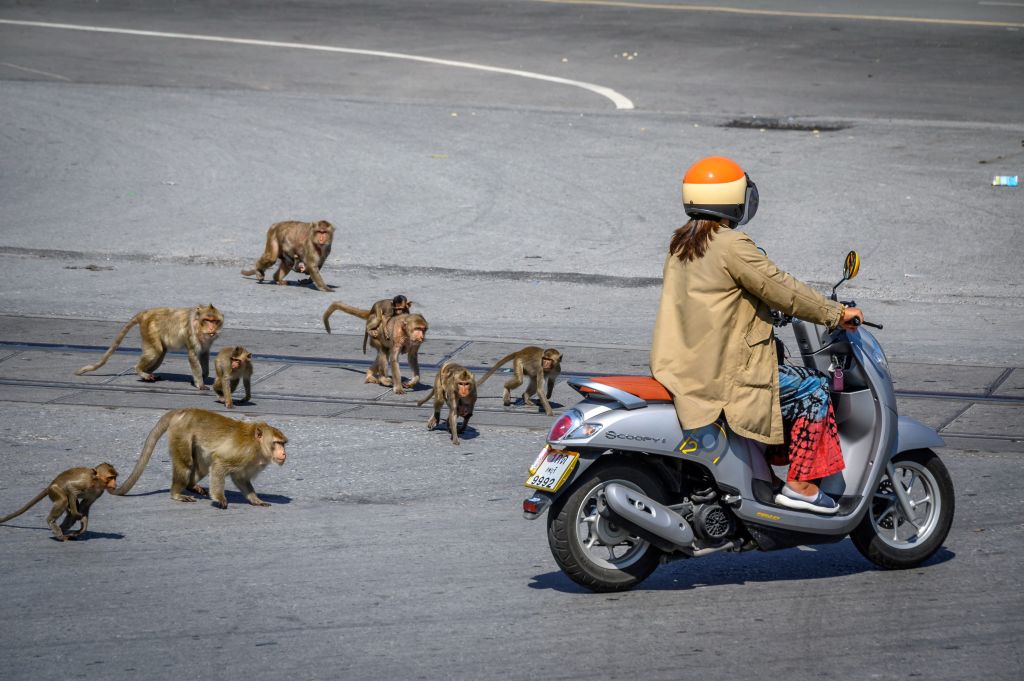 "It was heartbreaking to see an animal so upset, and exploited, but obviously tourists must pay to have the photo, otherwise why
would he be lurking around bars trying to make money?

“It may look cute to see a monkey dressed up, but tourists need to think about the consequences of paying for a photo – what seems like a great pic for social media equals a lifetime of misery for the poor animal.”

Street performances have already been banned in Indonesia, and PETA last month called for Thailand to pass a total ban on the enslavement of monkeys.

If action is taken now, many could be rehabilitated and ultimately returned to the forests where they belong.

chai, from, mum’s, snatched, their
You may also like: