Soldiers continued to stand their ground throughout the night and into Thursday morning outside the White House and the Lincoln Memorial in the sixth day of protests in Washington D.C.

The night was marked with a heavy military presence but there were no altercations reported between protesters and law enforcement as the sun rose and curfew lifted at 6am.

The streets around the White House remained quiet early on Thursday morning after a week of tense clashes but military still stood guard outside the city’s most famous landmarks.

Stragglers from the hundreds of protesters who remained until the early hours of the morning were seen confronting soldiers as the sun rose.

The quieter scenes came as three generals condemned Trump for his use of the National Guard to combat the protests. 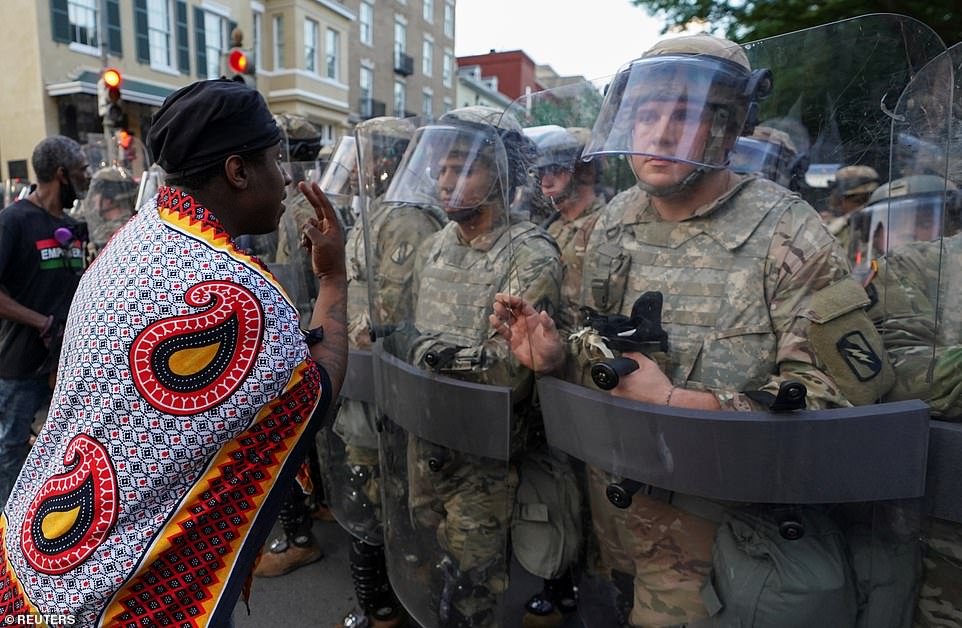 A man confronts a soldier outside the White House at sunrise on Thursday morning. Many of the protesters left around 3am after a night marked with a heavy military presence that cut off demonstrators’ access to Lafayette Square 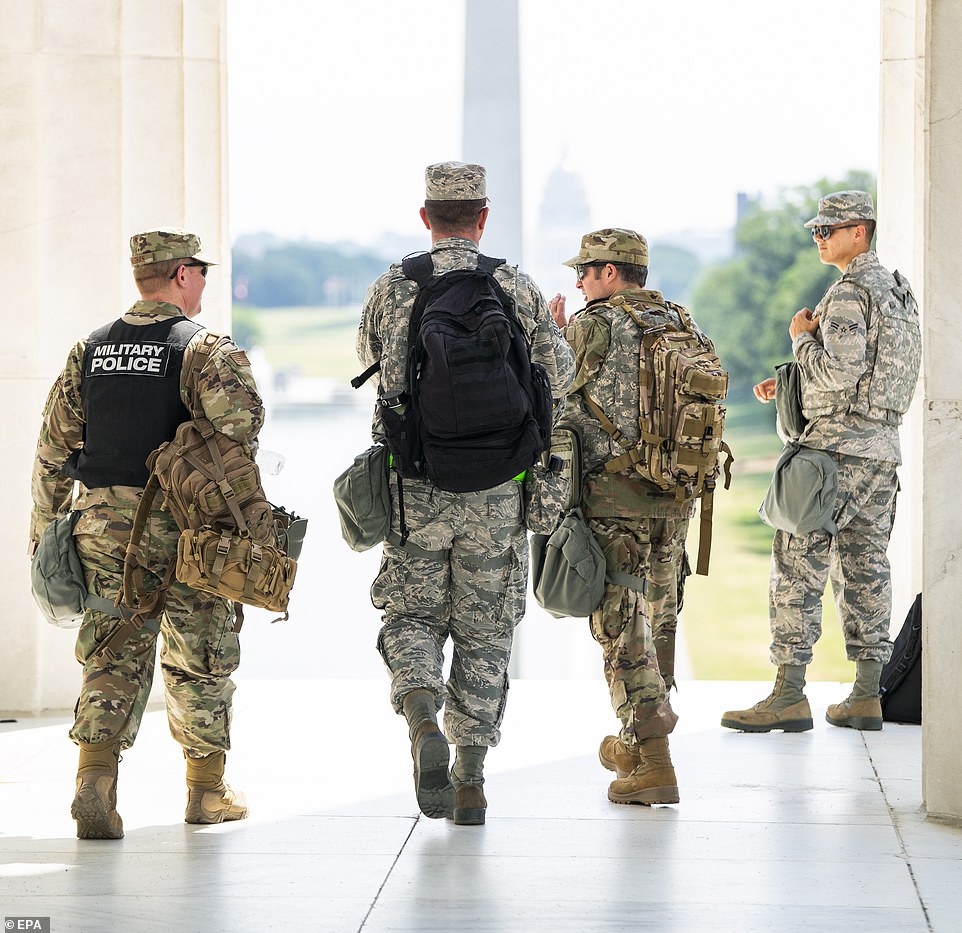 Members of the DC National Guard gear-up after a short rest from standing guard at the Lincoln Memorial Thursday.  The city remained quit early on Thursday morning after a week of tense clashes but military continued to stand guard outside the city’s most famous landmarks. The seventh day of protests begins Thursday at the Martin Luther King Jr. Memorial 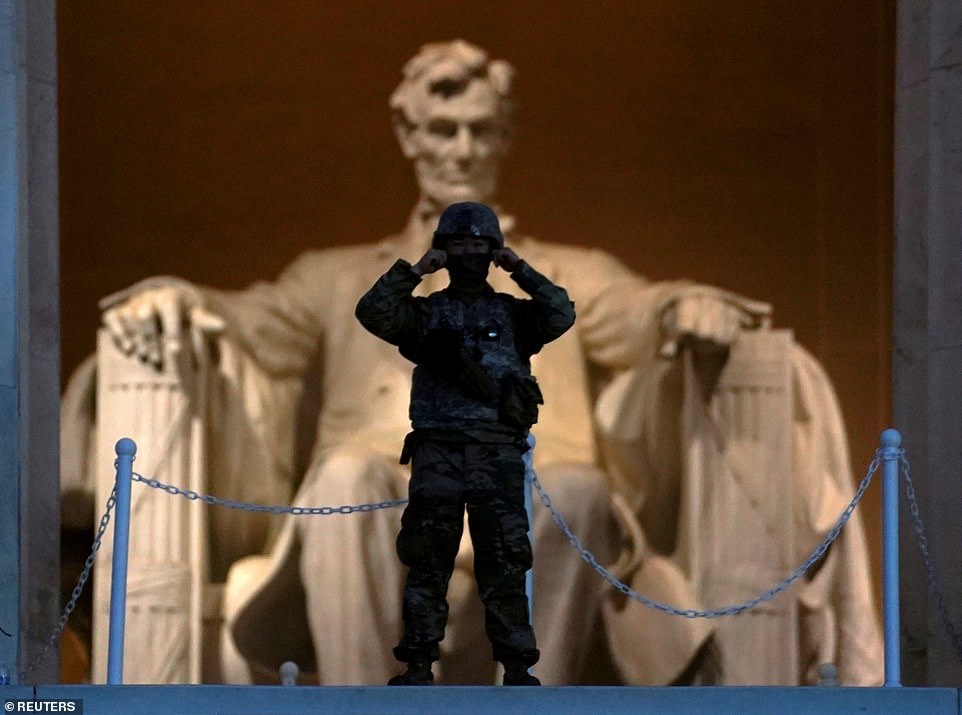 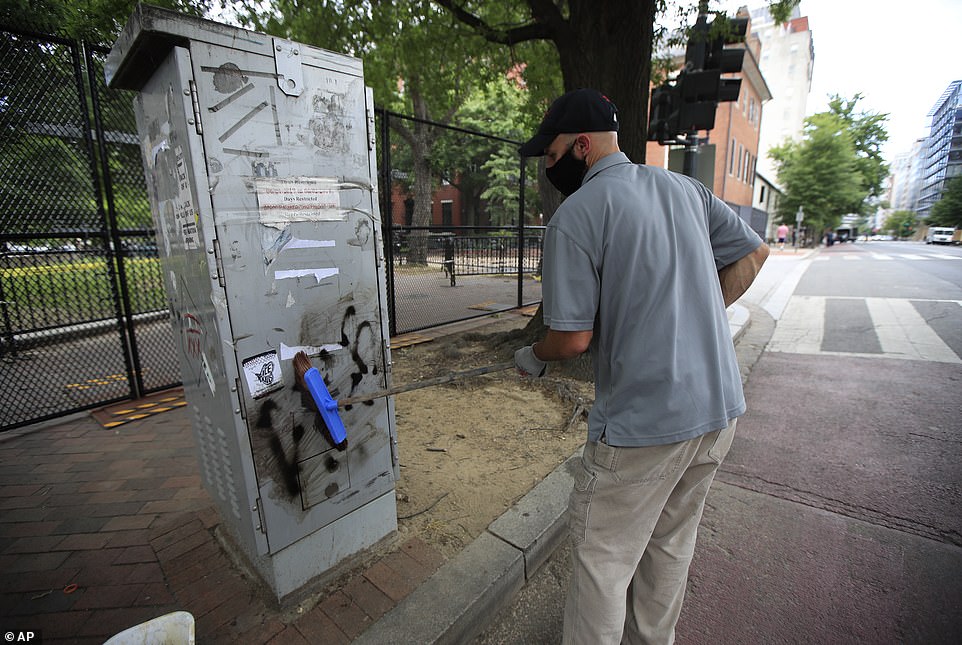 Workers appeared Thursday morning after sunrise in Washington D.C. to clean graffiti  after the sixth night of protests in the city that saw a heavy presence from law enforcement 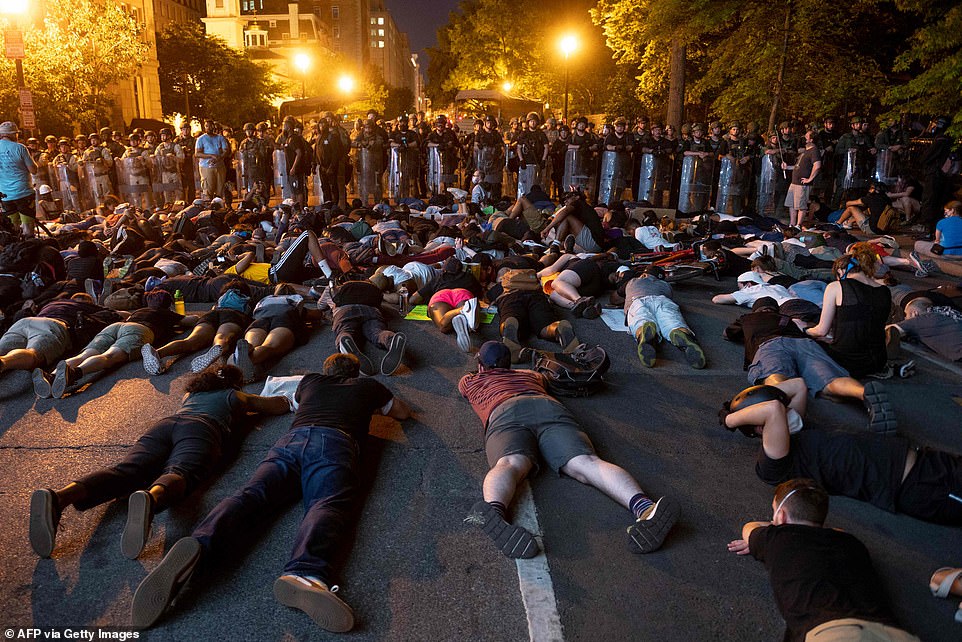 A curfew was again put in place across the city from 11pm on Wednesday night but protesters continued to turn out.

The crowds thinned out as night fell but hundreds remained.

The protests had a lighter feel to previous nights, however, as the crowds looked to deter those causing trouble.

As the curfew approached, protesters took a knee and continued to chant until around 3am Thursday morning.

There were no major incidents between protesters and law enforcement in much quieter scenes than had played out on Sunday and Monday night and no arrests were made.

Mayor Muriel Bowser has lifted the curfew for Thursday night, according to WUSA9.

Military police and law enforcement officers lining the streets came from a variety of federal agencies.

For the first time Wednesday, protesters could not approach Lafayette Square, the two-block long stretch in front of the White House.

The park was the place where agents used pepper spray and other chemical agents, along with rubber bullets and police on horseback to clear the streets around the White House on Monday so Trump could walk to St. John’s Church for a photo-op.

Military vehicles had laid out roadblocks in a one-block perimeter in all directions around the park.

The move caused protesters to spread out to different locations, including Trump’s downtown hotel.

Others gathered at the Capitol where in charge of protecting Congress took a knee as protesters shouted slogans, similar to other scenes that have played out across the nation. 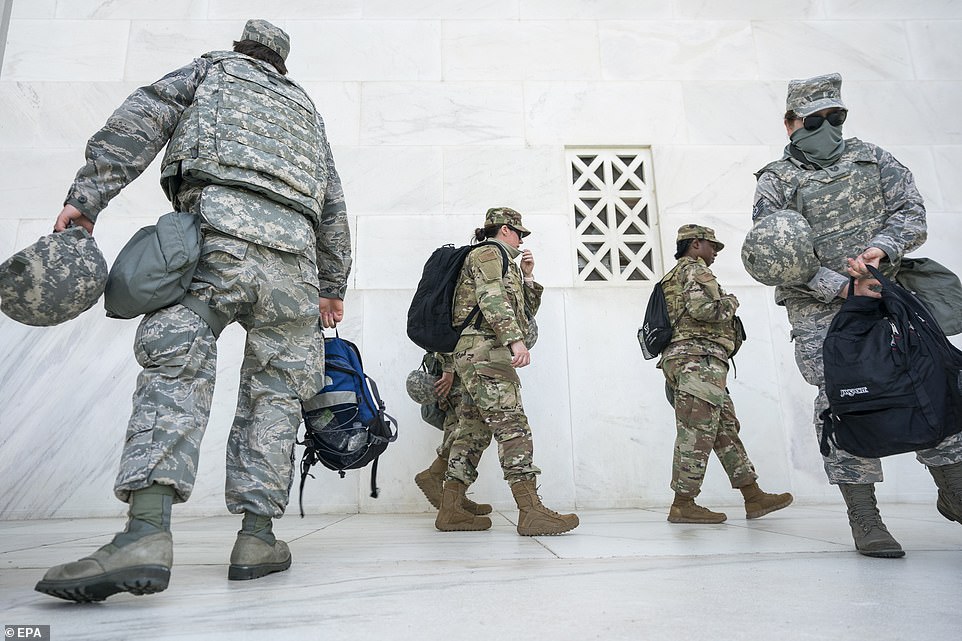 Members of the D.C. National Guard gear-up after a short rest from standing guard at the Lincoln Memorial Thursday on what will be the seventh day of protests in DC over the death of George Floyd. Demonstrations remained peaceful Wednesday 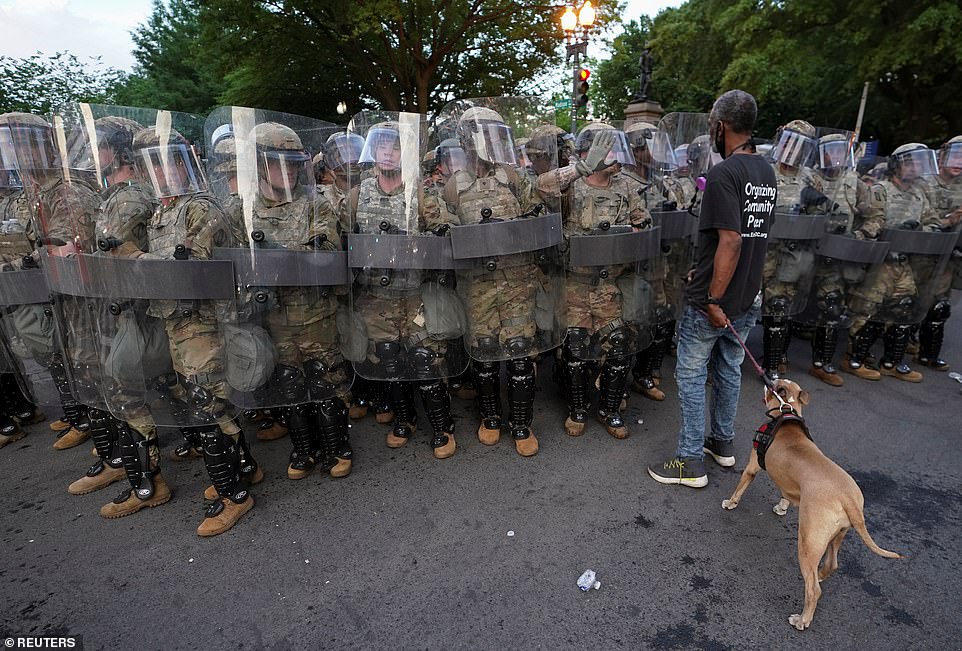 A man yells at soldiers at sunrise outside the White House on Thursday morning. The protests in D.C. remained peaceful throughout Wednesday and Wednesday night 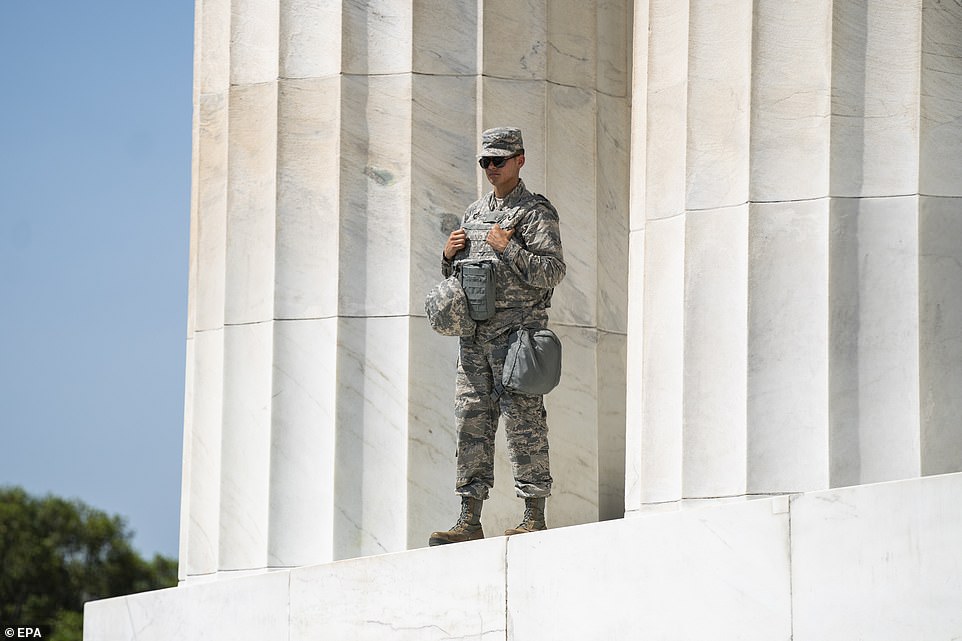 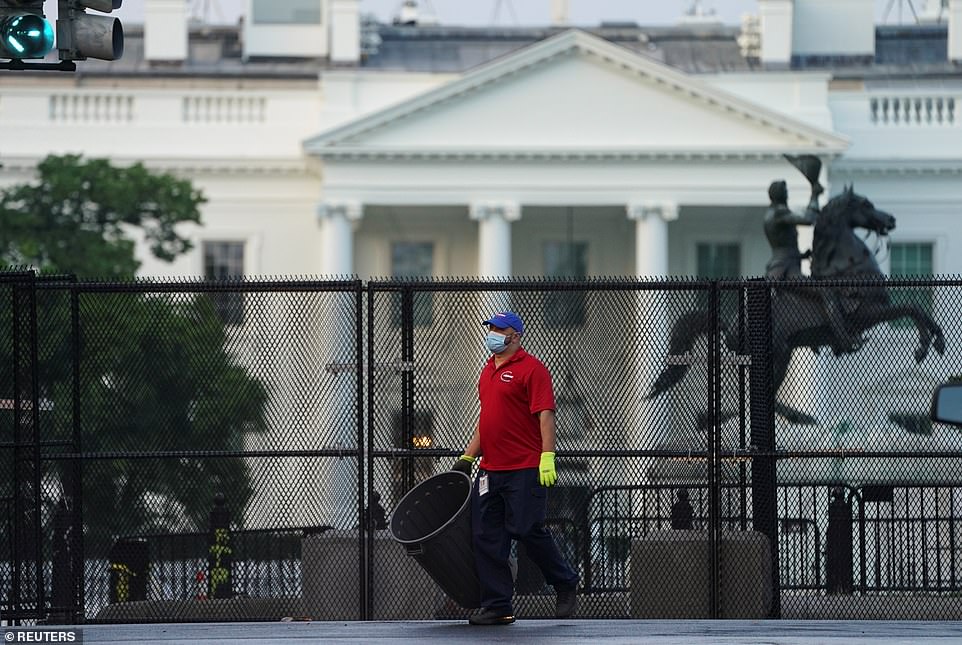 A senior Defense official said at least 2,200 Guard members would be on D.C. streets Wednesday, according to NBC.

President’s Trump’s decision to call in the National guard in repose to the protests was criticized by three U.S. generals on Wednesday and Thursday.

The chairman of the joint chiefs of staff put himself at odds with Donald Trump Thursday in a memo telling troops to ‘defend the Constitution’ and saying the National Guard was not under federal control – as retired generals including Jim Mattis denounced the president’s handling of the George Floyd protests.

Army General Mark Milley said in a letter to top military leaders that armed forces will continue to protect Americans’ right to ‘freedom of speech and peaceful assembly,’ as the president has called in troops to defend Washington, D.C.

‘We all committed our lives to the idea that is America,’ Milley hand-wrote in as an addition to the bottom of the letter. ‘We will stay true to that and the American people.’

Trump also faced a slew of backlash for the Monday stunt – as well as his decision to use military force against protesters – from military leaders.

Former Defense Secretary James Mattis issued his first ever open criticism of his former boss in an opinion piece published in The Atlantic on Wednesday.

‘Donald Trump is the first president in my lifetime who does not try to unite the American people – does not even pretend to try. Instead, he tries to divide us,’ Mattis said in a rare quip against the president.

Retired Marine Corp four-star General John Allen also lashed out at Trump in an op-ed Wednesday claiming his actions in the midst of violent nationwide riots over the death of George Floyd are ‘shameful.’ 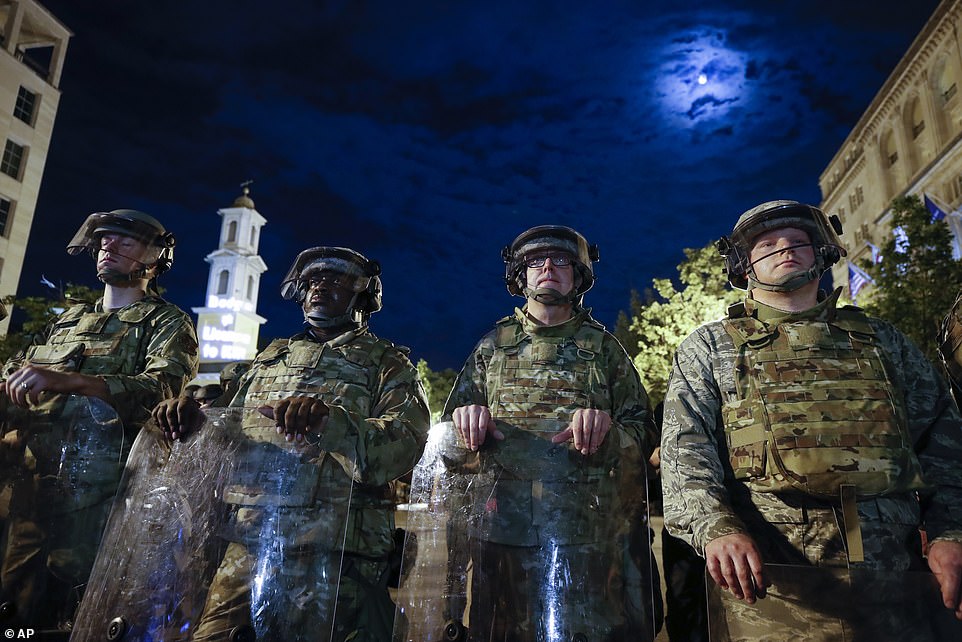 Utah National Guard soldiers stand on a police line as demonstrators gathered to protest the death of George Floyd in Washington D.C. on Wednesday night 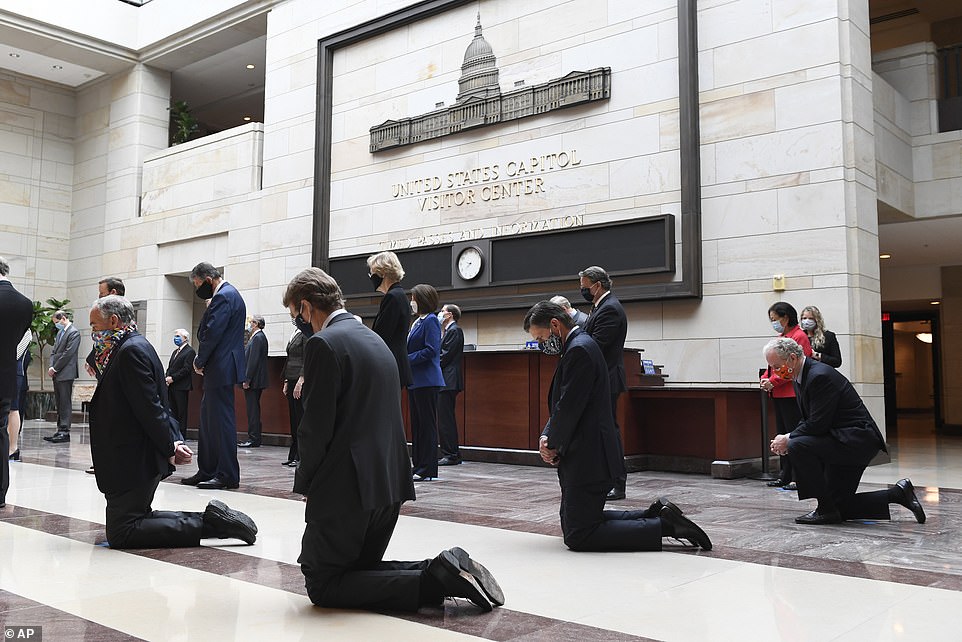 Despite the criticism, the National Guard remain in place in D.C. on Thursday.

The new fence blocking off the White House a block further down than usual also remains in place and had been reinforced despite a much quieter morning.

Workers also came out as day broke to clean the streets from the aftermath with more protesters expected to return for a seventh day of demonstrations.

Protests are set to continue Thursday starting with a Black Lives Matter-led die-in at the Martin Luther King Jr. Memorial. Demonstrators will lie on the ground for over eight minutes, the amount of time Floyd was pinned by Chauvin, NBC reports.

On Capitol Hill in an act of solidarity, Democratic Senators on Thursday paused and knelt for eight minutes and 46 seconds, the length of time that Floyd was shown being restrained with a knee on his neck by white cop Derek Chavin.

The four officers involved have now been charged.

Scores of heavily-armed federal officers in tactical gear have been on the district’s streets for days, after demonstrators set fires, broke store windows and stole items from the shelves and left police officers injured.

The Trump administration has made an effort to show a use of force in Washington.

Mayor Muriel Bowser said the administration had floated the idea of taking over the Metropolitan Police Department, a proposal she strongly rejected. She threatened to take legal action if the federal government attempted to do so.

The country’s ninth night of protests over the death of George Floyd came to a relatively peaceful end on Wednesday as crowds in several cities dispersed without aggressive intervention from police enforcing curfews.

continue, guard, Soldiers, to, Whi
You may also like: