London: Drunken gatherings, fisticuffs, vomiting and red wine stains left on the walls. This was life inside Downing Street when the rest of Britain was under strict stay-at-home orders.

Things were so warped that even the senior figure responsible for ethics and propriety provided a karaoke machine for a party. A scathing review also found “multiple examples of a lack of respect and poor treatment of security and cleaning staff”. 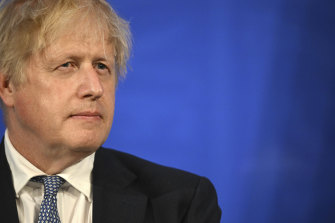 Boris Johnson has been quick to apologise, once again, for the so-called party-gate scandal which has rocked his leadership since January. There are plenty of those who still support him. The commentariat suggests he can “survive” the saga. They might well be right.

But whether he can safely navigate the latest political storm with spin, distraction or indeed good political fortune, one question must surely now be asked: What on earth were they thinking?

A snap poll published by YouGov on Thursday morning revealed three in five people – 59 per cent – believe Johnson should now resign. That number includes 27 per cent of 2019 Tory voters.

Because page by page, the report from senior civil servant Sue Gray outlined not only eight illegal parties when the rest of the country was in lockdown, but that senior figures knew they could be bending or breaking the rules. 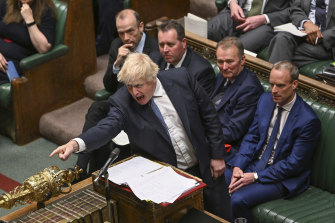 There’s always a “but” with Britain’s Prime Minister Boris Johnson.Credit:AP

A humbled Johnson told the House of Commons it was important to set out that over a period of about 600 days gatherings on a total of eight dates have been found to be in breach of the regulations in a building that is 5300 metres square, across five floors, excluding the flats.

“Some of these gatherings then went on far longer than was necessary… and they fell foul of the rules,” he said. “I want to say above all that I take full responsibility for everything that took place on my watch.”

But, and with Johnson there’s often a but, his staff were working “extremely long hours” during the pandemic, and he felt that it was appropriate to recognise them and “thank them for the work they had done”.

On May 20, 2020, Johnson’s principal private secretary Martin Reynolds, emailed 200 people inviting them to a drinks party in the Downing Street garden.

In response, a colleague warned: “Press conference will probably be finishing around that time, so helpful if people can be mindful of that as speakers and cameras are leaving, not walking around waving bottles of wine.”

Some time later Reynolds wrote to another colleague referring to the May party: “Best of luck — a complete non-story but better than them focusing on our drinks (which we seem to have got away with).”

It is clear these weren’t oversights or forgetfulness. It was a deliberate attempt to flout and manipulate rules which had separated families from loved ones, forced them to see their grandparents die on FaceTime, miss the birth of grandchildren or attend zoom funerals of friends.

And that, ultimately, is what this scandal is all about. Whether the rules were extreme or misguided or an overreaction, that doesn’t matter. What matters is that they were applied to some and not others. And that is the way it will be viewed by a grumpy public which is sick and tired of the weasel words from its leaders.

At an event on December 18, 2020, which involved up to 45 people in the Number 10 press office, Gray noted there was a raucous atmosphere with people drinking “excessively”.

“The event was crowded and noisy, such that some people working elsewhere in the Number 10 building that evening heard significant levels of noise coming from what they characterised as a party in the press office,” she wrote.

A cleaner who attended the room the next morning found red wine spilled on one wall and on several boxes of photocopier paper, the report said. It noted that staff at Number 10 repeatedly showed a lack of respect towards security and cleaning staff. 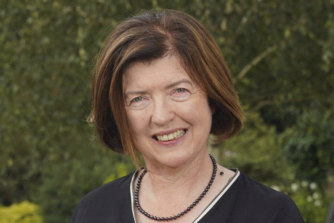 Sue Gray: make sure the senior offenders get their due.Credit:AP

Gray said it was not up to her to decide what disciplinary action should take place. That was for others to consider, she wrote. But she made it clear that “failures of leadership and judgment” in Downing Street and the Cabinet Office and that the country would be “dismayed” by what went on.

Separately to the review, police issued 126 fines to 83 people, with far more going to junior members of staff than their bosses — including Simon Case, head of the civil service, who was not fined at all.

Gray noted that younger staffers had often been following the lead of their superiors when they attended boozy parties.

“I do offer a reflection: while there is no excuse for some of the behaviour set out here it is important to acknowledge that those in the most junior positions attended gatherings at which their seniors were present, or indeed organised,” she said. “I hope this will be taken into account in considering any disciplinary action.”

In the days since the Coalition government in Australia fell there have been no end of offerings in the press as the lesson to be learned for the British Tories. Being seen to reapportion blame and dodge responsibility would be a fatal mistake.

Johnson’s allies are confident that the prime minister will not face a no-confidence motion — letters requesting one are required from 54 Tory MPs to trigger such a contest — despite the latest revelations.

While war rages on the continent and Britons face a massive cost-of-living crisis, MPs say the party breaches are just a “damning distraction”.

But Johnson’s real problem is that there’s a mounting case against him with voters. And sooner or later, it won’t be party-gate that’s the sideshow, but the PM himself.