A sorority sister who threw her baby in the trash after giving birth in a study room has spoken out in a jailhouse interview to say she now feels like a ‘monster’ and was in denial that her baby would be born.

Emile Weaver is serving life in prison for the death of her baby, who she gave birth to in secret then threw in the trash in 2015 when she was 21.

Sorority sisters found the lifeless baby’s body in a plastic trash bag at the side of the Delta Gamma Theta house at Muskingum University’s New Concord, Ohio.

She had been left dead in the box with a cardboard mac n cheese box and an empty bag of Doritos.

In an interview with ELLE from prison, Emile said she now feels like a ‘monster’ and that she was in denial that the baby would ever be born.

She also said she found it difficult listening to her sorority sisters testify about how ‘heartless’ she was at her trial. 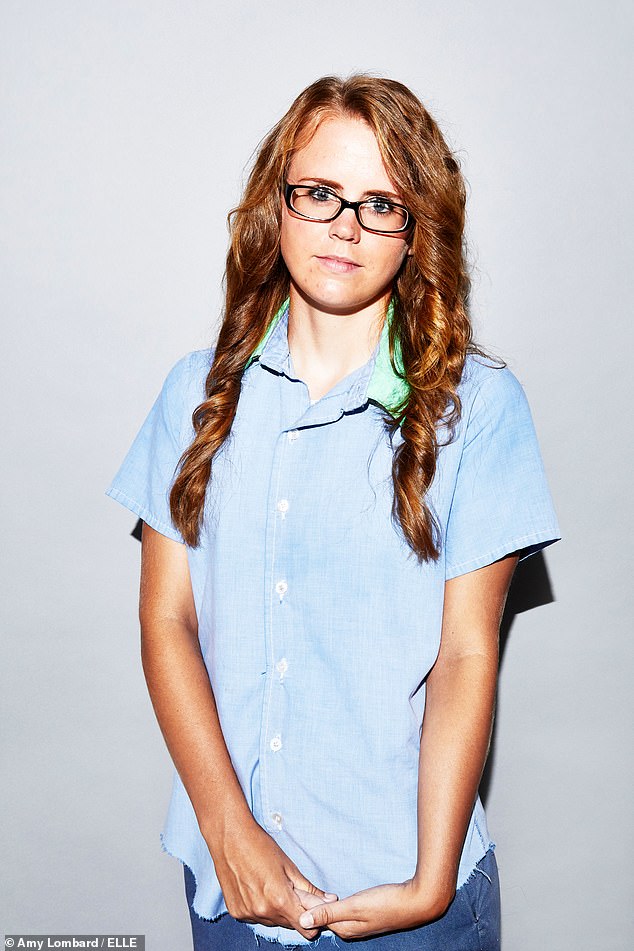 Emile Weaver in a new photograph taken in prison for her interview with ELLE magazine. She is serving life without parole for aggravated murder

‘I never wanted it to be like I ever blamed them for any of this.

‘They probably didn’t have much option to testify, but for them to just act like I was so heartless, that was what was hard.’

She also told how she was in denial about the pregnancy: ‘I think it just started out, like, first just telling people no.

‘Them not really thinking I was pregnant…manifested into a bigger [belief]: “I’m really not pregnant.'” 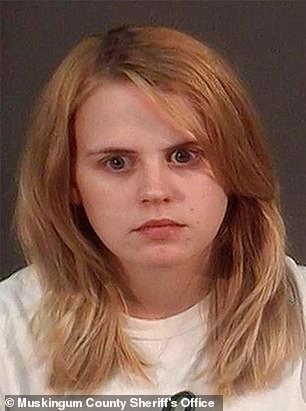 It was only when she was shopping for a burial outfit at Babies R Us that it dawned on her what had happened, she, said.

Asked how she felt in that moment, she said: ‘Like a monster.’

Some of the other female students who found the baby are interviewed.

Their names were protected but one recalled seeing Addison’s foot in the bag and realizing ‘it’s a whole f*****g baby’ with recoil.

Around the same time the girls found the baby, the sorority house manager found a bloody mess in the bathroom of the study room.

She issued a text which read: ‘Attention: Housemates, whoever made the mess in the study bathroom needs to clean it up ASAP.

Emile says she was like a regular sorority sister. In the September of her sophomore year in 2014, she went to the nurse to request birth control.

As is routine, they performed a pregnancy test and told her to wait for the  results.

She had been dating a college boyfriend but was also seeing her high school sweetheart, she recalled in the ELLE interview. Neither boy is named.

When she went to collect her pregnancy test, it was contained in an envelope. Emile signed for it but she never opened it. 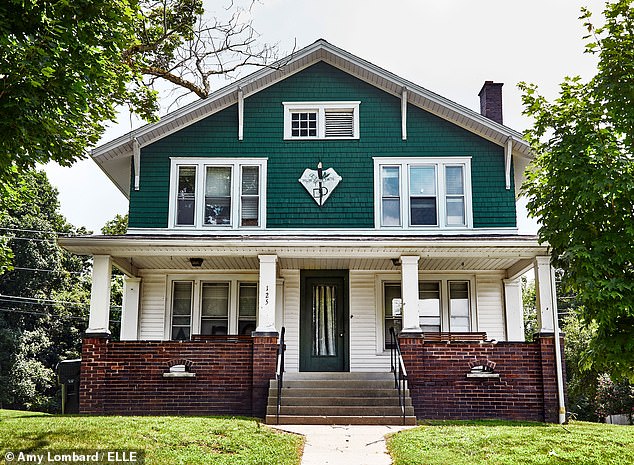 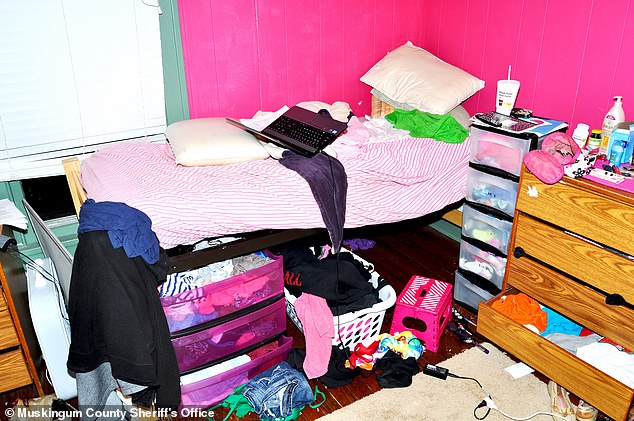 This is the dorm room which she shared with a friend and where she went into labor. She gave birth in a bathroom 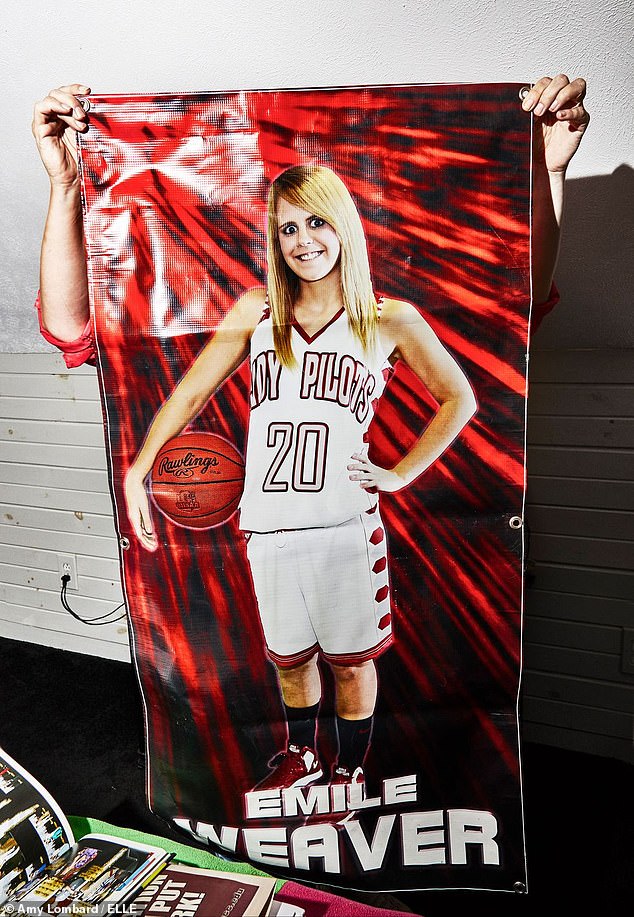 Emile is shown in a basketball poster. It was held up by her mother, Sandy, who was also interviewed for the piece

‘I think I was scared. I felt like I didn’t want to know, so I just put it off,’ she said.

Over the next few months, she told no one about her pregnancy. Sorority girls started to suspect it because she was gaining weight but, they say now, they chose not to confront her.

One, who shared her dorm with her, said at her trial: ‘I mean, I just didn’t want to offend my friend. Like if she wasn’t pregnant, I can’t say, “Well, you’re fat.”‘

Instead they watched as she continued to drink and, on one occasion, appear to throw herself down the stairs.

‘Between her drinking…and her falling, we were honestly concerned about her because we weren’t sure if she was pregnant and trying to do something about it,’ one said.

The house manager said she did ask if she was pregnant and that Emile told her she was not. 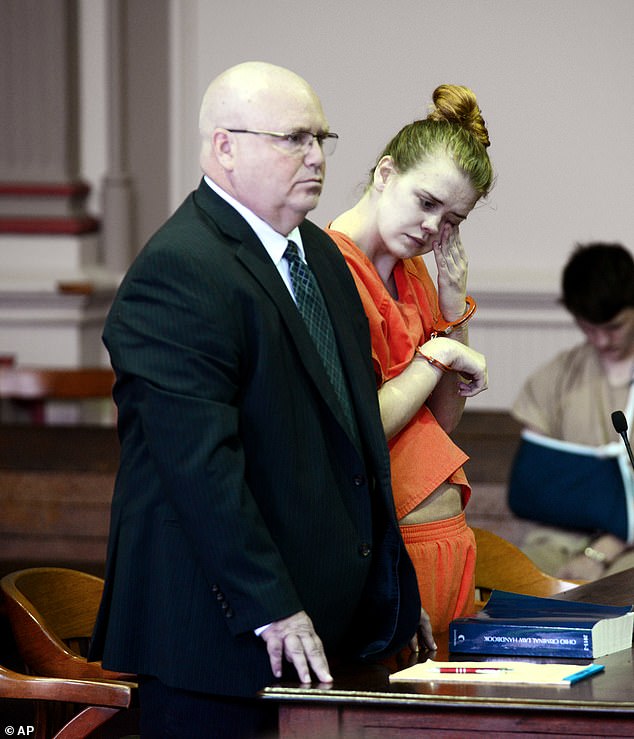 Emile during her trial. Her attorneys say she did not cause the baby’s death but that she simply left her in the trash

Emile said on the stand during her trial that she confided in her boyfriend but that he wanted ‘no part in it’. 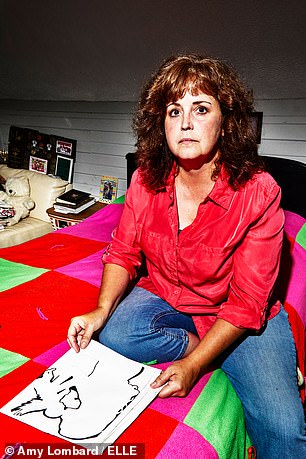 Emile’s mother Sandy who believes she was crying out for ‘someone else to take control’. She did not know she was pregnant

She claims they drove once to an abortion clinic but on their way were turned around by highway patrol because a winter storm was approaching.

She had been concealing her growing bump in baggy clothes including t-shirts and hoodies but at a basketball tournament, in a fitted t-shirt, it was on show.

In April, sorority sisters awoke to the sound of what they likened to a ‘dying cat’.

It was Elise going into labor. At her trial she testified how she went to the bathroom feeling like she needed to just use it.

The baby’s head came out and then, she said, she pulled out the rest of her.

She then went to the kitchen and retrieved a knife to cut the umbilical chord, and placed the baby in a trash pile.

Prosecutors argued that the baby died after her mother put her in the trash bag. 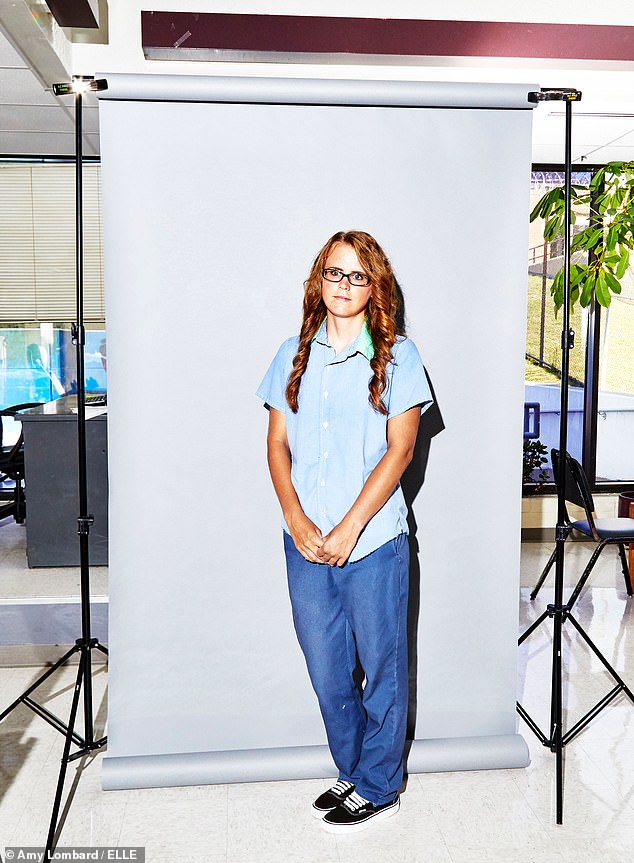 Now with red hair, Emile is serving life without parole in a facility in Ohio

Emile said she was a stillborn. She then tried to flush toilet paper down the toilet but it clogged and started to overflow.

When exactly she moved baby into the trash bag and took her downstairs is unknown but later, Emile went back to sleep then went to McDonald’s with a friend.

The friend said she seemed ‘fine’ but had limped to the car.

Police and EMTs were called after the sorority girls found the trash bag. Emile still maintained she had miscarried and told doctors when she went to the hospital that she had cramps.

Her mother Sandy now claims the sorority had more of a role than it claimed to the authorities.

She said they did not do enough to help her when it appeared to be an open secret or strong rumor that Emile was pregnant.

During her police interviews, she had to go to the bathroom repeatedly to tend to her wounds.

She did not go to the hospital for the first time until 81 hours after she had given birth, her mother says. By then, she had an infection.

Baby, Girl, I, Sorority, threw, Who
You may also like: