A pizza shop worker accused of lying to contact tracers has been blamed for plunging South Australians into a six-day lockdown, with the dramatic revelations prompting health authorities to abandon the state’s toughest restrictions earlier than expected.

SA Premier Steven Marshall publicly berated the fast food worker, whose dishonesty may have led health officials to wrongly suspect they could be dealing with "super strain" of the virus that had spread on pizza boxes, potentially infecting hundreds of customers.

“The selfish actions of this individual have put our whole state in a very difficult situation,” he said on Friday. 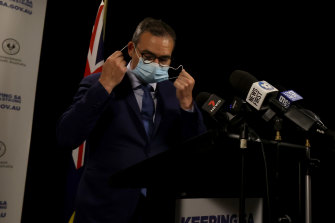 An angry Premier Steven Marshall has paid out on the pizza shop worker.Credit:Getty

SA Police has formed a special taskforce to investigate the circumstances around the man who provided false information to contact tracers and triggered a six-day hard lockdown.

It is claimed the worker told contact tracers he had purchased pizza from Woodville Pizza Bar in Adelaide's north, when in fact he had actually worked there for several shifts, alongside an infectious hotel security guard linked to the Peppers hotel outbreak.

The man at the centre of the extraordinary developments on Friday was also revealed by authorities to have been a kitchenhand at another quarantine hotel, the Stamford Hotel.

“I hope your business shuts down forever and never sells another pizza again,” one resident said.

Another resident wrote: “I really hope you all get charged. You willingly and willfully lied. You caused an entire state to go into lockdown. You caused many casual staff to lose income. You should be ashamed of yourselves".

“Police are monitoring the situation at the Woodville Pizza Bar, and are providing routine patrols at the scene and of the immediate area to discourage any acts of vandalism or property damage from members of the public,” a SA Police spokesman said.

It’s not known why the pizza shop worker lied to contact tracers, and Police Commissioner Grant Stevens did not respond to questions about whether the employee may have lied because he was working cash in hand.

The leader of Taskforce Protect, Assistant Commissioner Peter Harvey, said there was a “very strong” belief that “at least one person” had not told the truth to health authorities.

The state government announced an immediate end to a ban on outdoor exercising, while the strict lockdown that saw only one person allowed to leave the house per day for shopping or other essential activities will be lifted three days early.

From Sunday, most businesses will be allowed to reopen with density limits. There will be a limit of 10 people allowed in private homes and up to 100 people will be permitted to attend religious ceremonies. Gyms will also reopen.

However the state’s chief public health officer Professor Nicola Spurrier warned the number of positive cases would rise over the coming days, with 44 further suspected infections.

The SA president of the Australian Medical Association, Dr Chris Moy, said he supported the government’s decision to enter a hard lockdown and they had acted on the best available information.

“The concern, then, was this [infection] had gone out on a [pizza] box,” he said.

Dr Moy said the news that the man was a worker at the pizza shop and therefore a close contact of a known case, rather than a customer, fundamentally changed what was known about the outbreak.

He said it also meant that the risk the cluster posed in SA may be lower than expected.

He said it would be difficult to avoid a similar situation as contact tracing was based on telling the truth.

“You have to try and get people's trust and persuade them that authorities aren't ogres that will hit them over the head. It is in everyone's interest for them to tell the truth,” he said.

Under SA laws, those who lie to contact tracers cannot be fined, but this is now under review.

“We want to avoid being punitive,” he said. “We want to give people the confidence to tell the truth even when it can compromise them.”

It is not the first time contact-tracing efforts have been stymied by incomplete information.

A truck driver who spread the disease to regional Victoria but didn’t tell contact tracers about a visit to Shepparton was later fined.