London: Spain's former long-serving king has fled abroad amid allegations he may have inappropriately pocketed tens of millions of dollars from a secret offshore fund tied to Saudi Arabia.

Juan Carlos, who spent 39 years on the throne before abdicating in 2014 following a series of highly embarrassing scandals, made the bombshell announcement in a letter to his son, King Felipe, released on Monday. 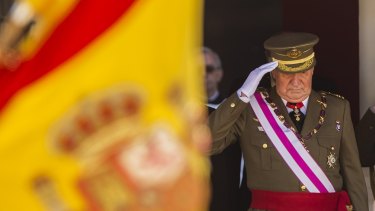 The former king of Spain, Juan Carlos, has left to live in another country.Credit:AP

The former monarch said his "well considered decision to move away from Spain" stemmed from the "public repercussions that certain past events in my private life are causing".

The 82-year-old also told his son he was "guided by the conviction to provide the best service to Spaniards, its institutions and to you as King".

After the letter was released, it quickly emerged that Juan Carlos had already left to settle in an as-yet unknown country.

He entered the self-imposed exile amid mounting dissatisfaction with the monarchy, as well as a major corruption investigation that threatens to ensnare the former monarch who was praised for restoring democracy following the death of dictator General Francisco Franco in 1975 but in recent years has become a highly polarising figure.

His critics questioned whether he had left to avoid scrutiny and potential prosecution for undeclared and inappropriate financial benefits.

Spain's Supreme Court prosecutor last month opened an investigation into the former king and whether he stood to financially gain from a €6.7 billion ($11 billion) contract awarded to a consortium of Spanish firms for a high-speed rail project linking the Saudi cities of Mecca and Medina.

Authorities in Spain and Switzerland are probing whether the rail contract had any connection to a reported €65 million "gift" the late Saudi king Abdullah gave to a foundation linked to Juan Carlos in 2008. 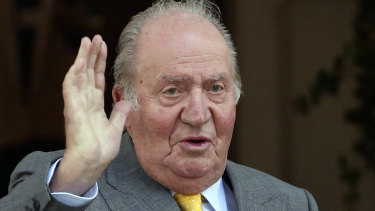 Juan Carlos was on the throne for nearly 40 years.Credit:AP

Spanish monarchs are immune from prosecution but Juan Carlos' abdication in 2014 could open him up to legal action that would also be a hammer-blow for trust in the county's royal family.

A statement from the prosecutor's office at the time said the new investigation would seek to "define or discard the criminal relevance of events that occurred after June 2014" – when he ceased receiving constitutional immunity.

Juan Carlos has previously refused to comment on allegations.

His lawyer, Javier Sanchez-Junco, on Monday said the former king would "remain at the disposal of the prosecutors' office" despite his decision to leave. 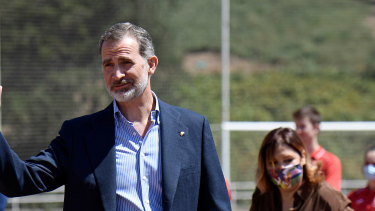 "A healthy democracy…does not look the other way and in this case it is not,’ he said last month.

"There is a judicial power that is acting. And there is a royal household that is clearly distancing itself from those supposedly reprehensible practices. These elements show that our democracy works and that there is no room for impunity."

King Felipe earlier this year said he would not accept any inheritance from his father and stripped the former monarch of his annual €194,000 stipend.

King Felipe took over in 2014 after his father stepped aside following a highly damaging elephant hunting trip to Botswana. The trip was meant to be kept secret from recession-hit Spaniards but became public after the then king fractured his hip and had to be flown home.

At the same time, his son-in-law Inaki Urdangarin, former handball player turned entrepreneur, was caught up in a fraud and embezzlement probe that led to his jailing in 2018.

Urdangarin's wife, Princess Cristina, was found not guilty of aiding her husband.

The country is reeling from the coronavirus pandemic, which has officially killed nearly 30,000 people and decimated its already fragile economy. It is also facing the threat of a second wave of infections amid a growing number of cases.

flees, former, King, Spains, the
You may also like: