Follow
Home » World News » ‘State of shock’: Arrests made in Lebanon as recovery from blast begins

‘State of shock’: Arrests made in Lebanon as recovery from blast begins

London: Investigators in Lebanon have ordered the arrest of port officials over the Beirut blast, focussing on alleged negligence in the storage of an ammonium nitrate stockpile that's being blamed for the explosion.

The country's cabinet ordered officials at the Port of Beirut to be placed under military-supervised house arrest after the deadly blast killed 137 people, injured more than 5000 and flattened stretches of the capital's downtown area. 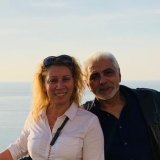 Sydney woman Ruby Chehade was with her fiancee when the Beirut explosions occurred. Photo: Supplied

Tuesday's explosion was thought to have been triggered by a fire in the waterfront warehouse containing 2750 tonnes of ammonium nitrate for the past six years. The material was stored there after it was confiscated from a cargo ship in 2014.

While the investigations continued into the conduct of port officials, it also emerged that senior government ministers were repeatedly warned about the risk of storing the highly dangerous material in a densely populated urban area, but did nothing about it.

New reports details how bags of the ammonium nitrate had been stacked on top of each other in a large warehouse after Lebanese customs officials seized the chemicals from a ship in 2014.

The warehouse – which has now been replaced by a 140-metre-wide crater – appears to have had lax security and little ventilation despite Lebanon's hot climate and the potential to raid the material for bombs. 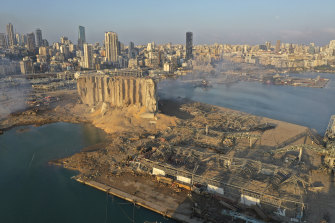 A drone picture shows a huge crater caused by an explosion in Beirut.Credit:AP

Beirut's governor, Marwan Abboud, said the homes of some 300,000 residents had been rendered uninhabitable from the shockwaves of the blast. The city's grain silos, which were next to the warehouse and store more than 80 per cent of the impoverished country's imported grain, were also destroyed.

Yukie Mokuo, the Lebanon representative for UNICEF, said a colleague had lost his spouse and seven staff were injured.

"Most of our staff – as are most people in Lebanon – are in a state of shock," she said.

"Yesterday's catastrophe in Beirut adds to what has already been a terrible crisis for the people of Lebanon compounded by an economic collapse and a surge in coronavirus cases.

"The pandemic already meant that hospitals are overwhelmed, and frontline workers are exhausted." 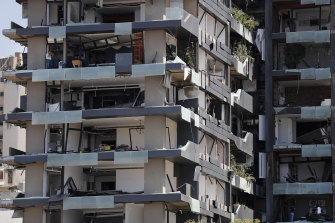 One of hundreds of shattered apartment buildings in Beirut.Credit:AP

Shock over the scale of the devastation is now giving way to anger over the apparent negligence which caused it.

In a sign of the tensions, a UN-backed court that was due to hand down its verdict on the 2005 assassination of former Lebanese prime minister Rafik al-Hariri on Friday has postponed the judgement until mid-August. 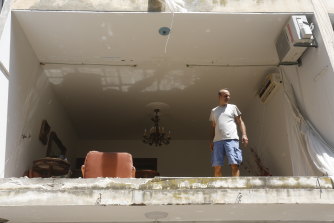 A man looks out from the collapsed facade of a building in downtown Beirut.Credit:Getty

Customs chief Badri Daher told reporters that his department had repeatedly asked for the ammonium nitrate to be taken away but "this did not happen".

"We leave it to the experts and those concerned to determine why," he said.

Lebanon's President Michel Aoun pledged a transparent inquiry amid speculation over how the fire started, whether Hezbollah knew about the ammonium nitrate stockpile or ever accessed it, and whether firefighters who first raced to the scene of the warehouse blaze knew the building contained a highly explosive material.

"We are determined to investigate and reveal what happened as soon as possible, to mete out punishment," Aoun said.

Asked about the cause in an interview on the BBC, Lebanese Economy Minister Raoul Nehme replied: "I think it is incompetence and really bad management and there are a lot of responsibilities from management and probably previous governments."

arrests, made, of, shock, State
You may also like:

Bill Cosby has requested NOT to listen in on today's hearing

Why is Wikipedia asking for money?

A Pa. Teen Pleaded Guilty to Fatally Stabbing His Brother — But Family Maintains His Innocence