Stormy Daniels on why she ‘described Donald Trump’s penis’

Adult film actress Stormy Daniels says she revealed intimate details of her alleged affair with US President Donald Trump to prove she is ‘telling the truth’.

Ms Daniels defended writing what she claims is an accurate description of Mr Trump’s penis in her new book and denied doing so to humiliate the Republican.

The actress told BBC2’s Newsnight: ‘Unless he’s had a penis transplant then I’m pretty sure that’s a checkmate.’ 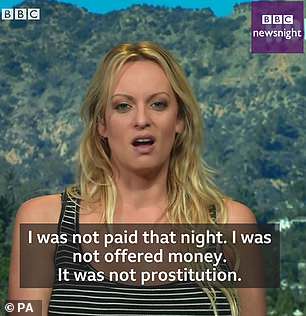 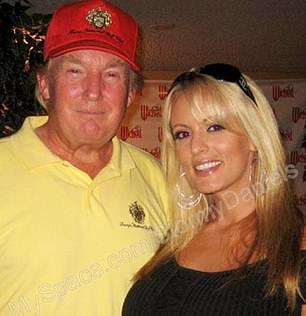 The adult film actress (pictured, left, this evening on Newsnight and, right, with Donald Trump) says she gave an accurate description of his penis and did so to prove that they had sex

Asked if she was trying to humiliate the president, Ms Daniels said Mr Trump ‘attacked me first’, adding: ‘I would never humiliate someone for no reason, or for any reason.’

Ms Daniels said she revealed the details ‘to prove that I was telling the truth. She said: ‘I actually don’t make it a habit to kiss and tell, part of me feels guilty about doing that. 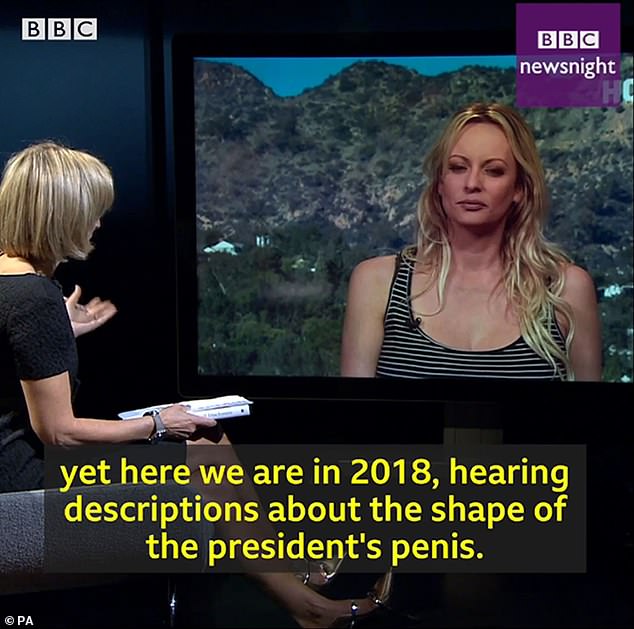 ‘But by recounting every detail, I think it’s obvious that I know things that only someone who had actually experienced and been there would know.

‘And I would never have included any of those things, or kiss and tell for lack of a better explanation, if it wasn’t for the fact that I was being called a liar.’

Ms Daniels writes in her book Full Disclosure: ‘He knows he has an unusual penis. It has a huge mushroom head. Like a toadstool.’

President Trump has insisted he did not have an affair with the actress, but has admitted she was paid hush money.

Ms Daniels said people were quicker to discount and discredit her because of her job.

‘They, for some reason, think that because of my job, I’m to be trusted less than someone who is perhaps like a schoolteacher or accountant.

‘I’m very grateful to all the women who have stood up and supported me, but some of the nastiest comments I’ve gotten are from other women who think that I am not worth believing or that I’m inhuman because I work in the adult business.

‘My job shouldn’t have anything to do with my character.’

Ms Daniels insisted the alleged encounter with Mr Trump was consensual and not about money.

She also pointed out the difference between her story and the women pushing for gender equality in Hollywood as they push back against sex attackers using the #MeToo hashtag.

‘He mentioned something about a part on a TV show,’ she said. ‘It was never specifically said “hey, if you have sex with me I will give you this”, it wasn’t anything like that. But it was definitely not a #MeToo moment.

‘And that’s another really irritating thing, is when people think that I was either a prostitute or a victim: I was neither.’