A stray dog has been saved after getting itself stuck in tar in Taiwan.

The male black dog was rescued, cleaned and given a second chance at life by a group of animal lovers after being spotted dying inside an asphalt factory on May 1.

It was first found by Hsu Wen-liang, a co-founder of a local animal sanctuary, who had been informed of the trapped pooch by a worker at the factory. 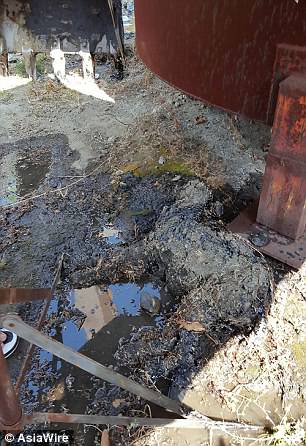 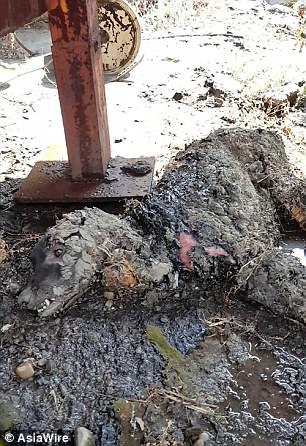 The dog is seen lying on the ground, appearing to be dying, on May 1 in Tainan, southern Taiwan (left). The pooch has been completely covered in asphalt and unable to move (right)

According to local news outlet ET Today, Mr Hsu and 10 other volunteers went to the site to look for the trapped pooch.

Video of Mr Hsu’s heartbreaking encounter shows him picking up the dying dog with a blanket and later trying to feed it some water using a syringe.

The animal appears defensive at first but later accepts the help.

‘He wants to bite us for one point, it must be very painful for him,’ said Mr Hsu.

Mr Hsu and the volunteers have named the dog Shan Fu, meaning ‘kind and fortunate’.

The dog’s asphalt-encased body meant it was unable to move, so it couldn’t find food or water, stated the report.

Mr Hsu uploaded pictures of Shan Fu on his Facebook account yesterday, which show volunteers continuing cleaning up the asphalt and shaving off some of its fur.

It’s said the shaving could help the pooch grow a new coat.

Mr Hsu told the press that he found another dog stuck in tar in February. He said he spent three days washing off the asphalt from the dog , which he named ‘Shan En’. 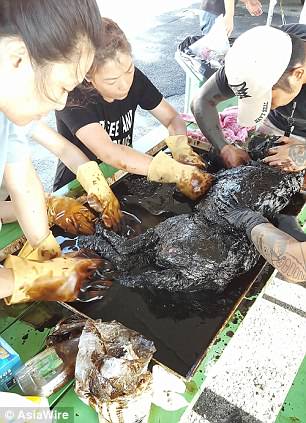 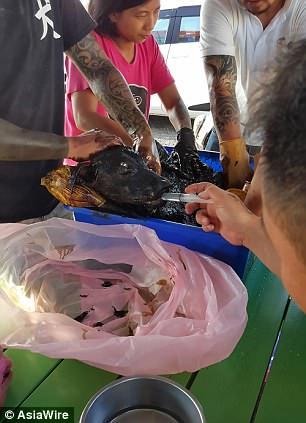 Volunteers in Taiwan wash Shan Fu’s body using olive oil and baby oil (left). They also feed it vitamins through a syringe to help it keep its strength (right) 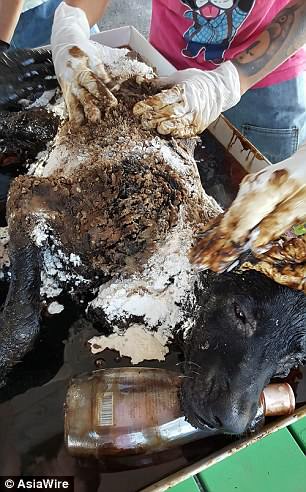 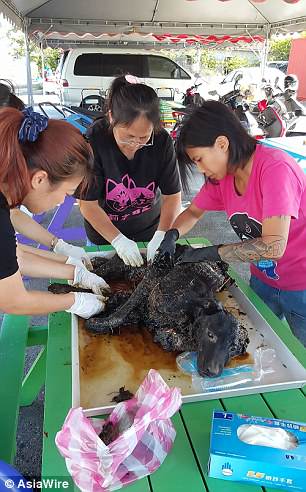 Shan Fu the dog was left fighting for its life after hours of rescue from the asphalt plant (left). One of the volunteers believes Shan Fu had gone into the factory by mistake (right)

According to Now News, the Tainan City Animal Protection Office said they were treating the incident as an accident, believing the animal had got itself trapped in asphalt at the bitumen plant.

Should any evidence arise of animal abuse, the office would punish the culprit with fines and possibly jail time, reports said.

The Hsu Animal Sanctuary was founded by Mr Hsu’s sister, Hsu Wen-hui, who is known for saving dogs ‘from death row’ at government-owned pounds.