Sunbathing IS banned: Government warns people they risk fines for lying down in the sun ahead of 75F Easter weekend – because ‘it is NOT essential movement’

Britons have been banned from sunbathing just as temperatures begin to soar after covidiots continued to flout lockdown rules on the weekend with activities including windsurfing, beach barbecues and even an adult baptism.

There was anger yesterday after one London authority closed a park after reporting thousands of visitors flocking there to lounge around in the warm weather after a wet and miserable winter.

Asked the clarify the rules today, the Prime Minister’s official spokesman confirmed that anyone caught sunbathing could be fined, saying: ‘People should not be going to parks or beaches to sunbathe. It goes against our rules on essential movement.’

A policeman with a megaphone was seen ordering sunbathers to leave a park in south London over the weekend, while on Brighton beach officers doused a barbecue with seawater scooped up in their helmets.

Police now face their biggest enforcement challenge yet with temperatures set to soar to 75F leading up to the Bank Holiday weekend, although No10 today ruled out a ban on exercise, as hinted by Health Secretary Matt Hancock on the weekend. 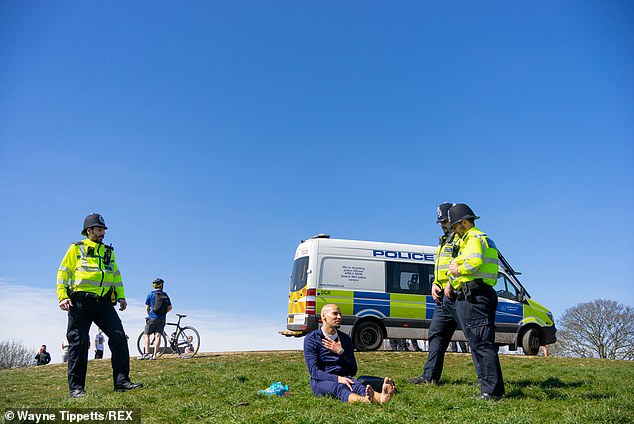 Police try to move on a sunbather in Primrose Hill, London, where some people flouted lockdown orders 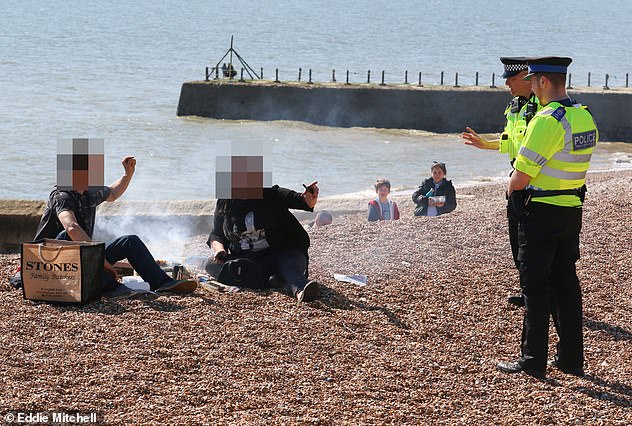 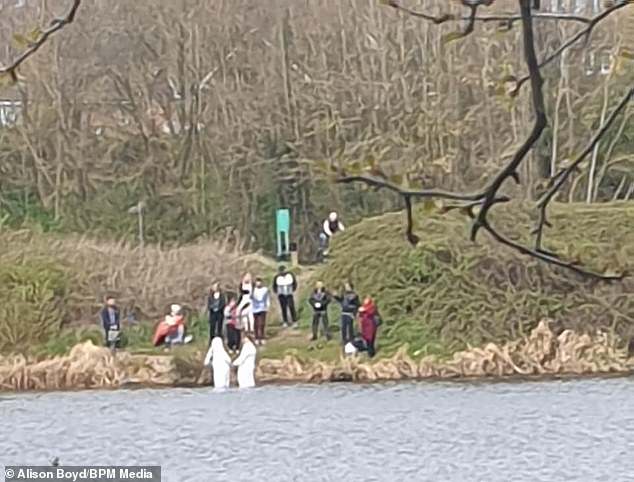 Passers-by saw an adult baptism taking place yesterday in a lake in Solihull, West Midlands, despite police demands to stay inside

Lambeth Council in south London decided to shut Brockwell Park near Brixton yesterday after 3,000 people descended on it to enjoy the warm weather.

Police moved people on in north-west London’s Primrose Hill and rules were breached on the south coast too, but the consensus in Government is that the public are largely cooperating.

There had been public confusion over whether it is acceptable to sit down and enjoy the sunshine when once-daily exercise is condoned under the official guidelines.

The Prime Minister’s official spokesman said that the were no plans to ban outdoor exercise – as hinted at by Health Secretary Matt Hancock at the weekend.

But he added: ‘People should not be going to parks or beaches to sunbathe. It goes against our rules on essential movement.

‘We did set out very clearly the reasons why people should leave their houses and sunbathing was not one of them.

‘We gave the police powers to implement those guidelines and it’s up to them to exercise discretion over how they do so.’

Sunny, warmer-than-average conditions are set to continue this week, with a peak of around 75.2F (24C) forecast for Wednesday and Thursday in southern England, the Met Office said. 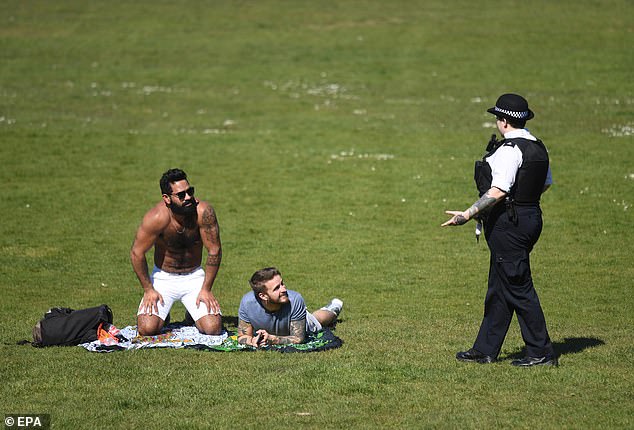 The Prime Minister’s official spokesman said: ‘People should not be going to parks or beaches to sunbath. It goes against our rules on essential movement’. Pictured is a policewoman asking sunbathers to move on yesterday in Greenwich Park, London 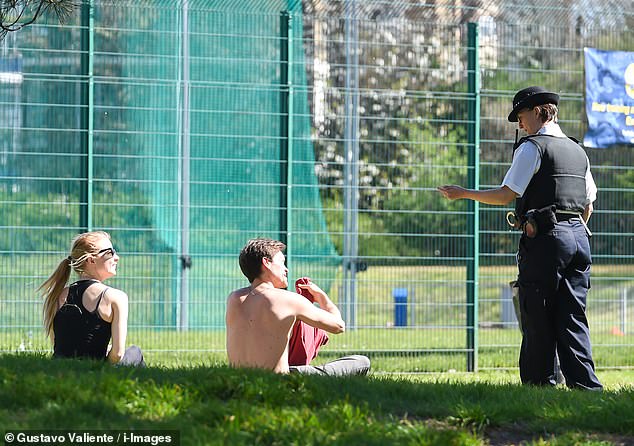 There was anger at the weekend after one London authority closed a park after reporting thousands of visitors flocking to it to enjoy the sun and warmth weather after a wet and miserable winter. Southwark park is pictured yesterday 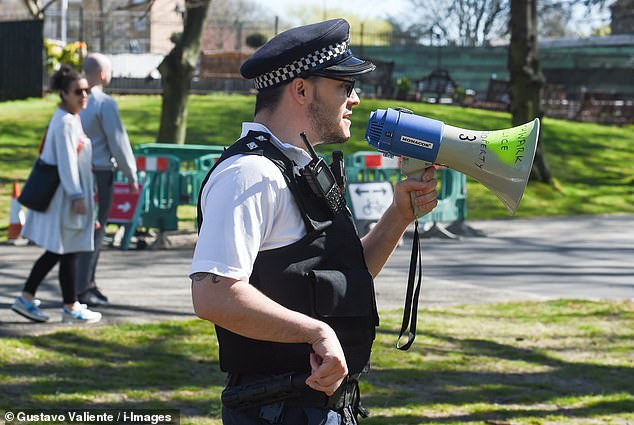 A police officer uses a megaphone at Southwark Park, to announce sunbathing is not allowed, but exercise is

Elsewhere this weekend, police extinguished a beach barbecue with a helmet in Brighton while windsurfers were fined for driving 125 miles from the West Midlands to North wales to enjoy the waves.

Uploading the video, he wrote: ‘The ceremonial extinguishing of the bbq using a beach patrol guys helmet. Then tried to eat his wet sausage.’

They have been summonsed to court and will be charged under the new Coronavirus Act, The Argus reports. A 31-year-old man and a 48-year-old woman were told to return home.

It came after two windsurfers were fined after driving 125 miles from the West Midlands to North Wales to enjoy the waves as police blasted their non-essential trip.

The pair travelled to Gwynedd from Birmingham despite the nationwide lockdown amid the coronavirus pandemic. 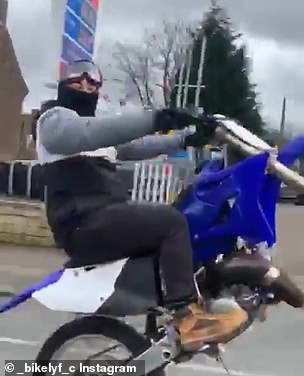 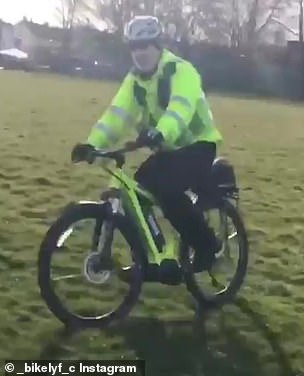 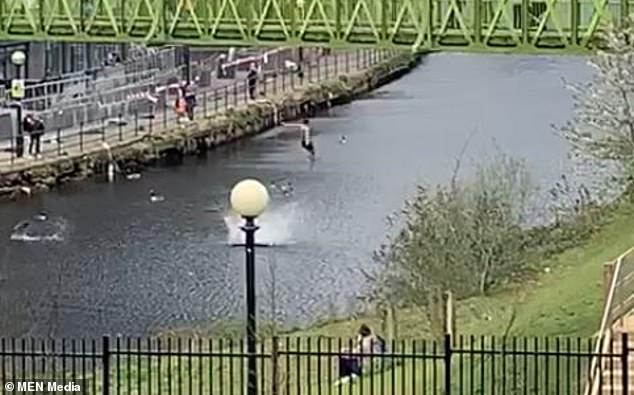 North Wales Police said they went to Black Rock Sands in Porthmadog to head out into the sea despite people being told to only travel for essential reasons.

The force said that if they had got into difficulty in the water, they could have tied up valuable resources.

A spokesman said: ‘Today two males from the West Mids area were reported by concerned members of the public who spotted them wind surfing at Black Rock Sands, Porthmadog.

‘They were issued with penalty notices and advised to return home immediately. Their trip was not essential, and apart from the risks posed by travelling around the country potentially spreading virus anywhere they stopped, they could have tied up valuable resources had they had an accident or got into difficulty at sea, risking RNLI, ambulance and diverting essential NHS resources. ‘Stay home to save lives.’

A biker was spotted taunting a police officer in Huddersfield, West Yorkshire, who was trying to approach him on a bicycle.

The motorbike rider mocked him in footage in which he could be heard saying: ‘Come on, nearly, f****** hell.’ 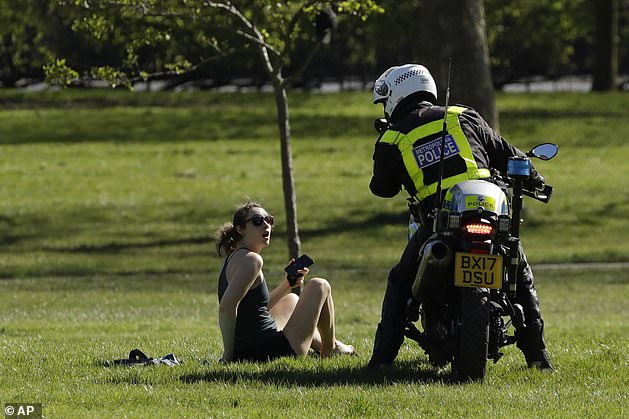 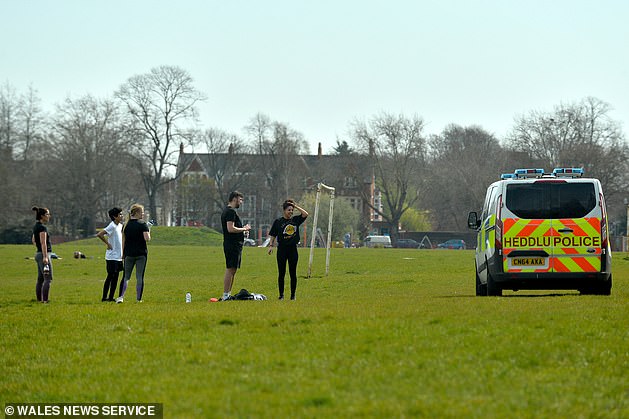 One family travelled 122 miles for a day at the beach this weekend – despite orders to stay at home to save lives.

The group flouted strict lockdown measures to make the two hour and 20 minute round trip from Bromley, south east London, to Folkestone in Kent.

They were let off with a warning as the council reminded residents ‘this is not a public holiday’.

The rise came as the Met Police used a loudspeaker on Wandsworth Common, south-west London, to disperse people in the park.

Two young men ignored the coronavirus lockdown and leapt into the River Irwell in Manchester city centre. The Manchester Evening News has been inundated with reports of people ignoring the Government’s advice to stay at home this weekend to help prevent the spread of Covid-19. 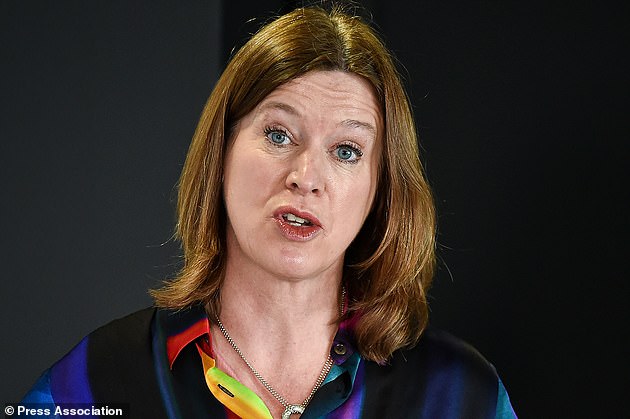 The images, published in the Scottish Sun, emerged amid continuing advice from the Scottish government to stay at home in order to save lives and protect the NHS 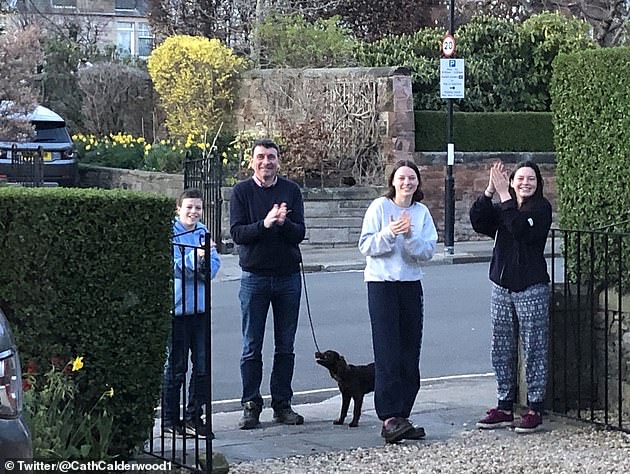 Last week Dr Calderwood, 51, tweeted a photo of her family from their main residence in Edinburgh as they clapped for the front-line NHS staff working to stop the spread of Covid-19

It came after Scotland’s chief medical officer resigned after she admitted to ignoring her own lockdown advice.

Dr Catherine Calderwood had earlier apologised live on TV after being given a police warning for twice visiting her family’s coastal retreat in Earlsferry, Fife, more than 40 miles from her main home.

In a press conference beside Scotland’s First Minister Nicola Sturgeon today, Dr Calderwood said her actions were ‘a mistake and human error’ and that were ‘no excuses’.

Dr Calderwood issued an apology and was initially backed by First Minister Nicola Sturgeon to remain in the role.

Photographs, published in The Scottish Sun on Saturday, showed Dr Calderwood and her family near their coastal retreat in Earlsferry, Fife, over the weekend.

In the press conference, Dr Calderwood also admitted to visiting the cottage with her husband the previous weekend. 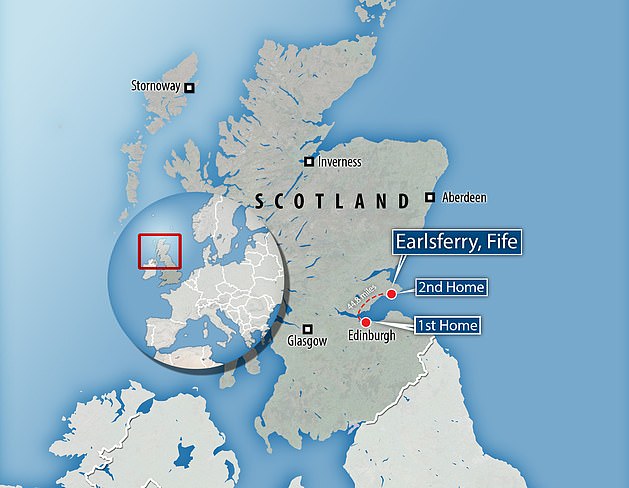 Earlsferry, Fife, is 44 miles away from Edinburgh – a drive of around an hour