Is America suffering protest fatigue? Support for BLM demonstrations falls to 39% from 54% in three months amid fresh unrest over Breonna Taylor ruling

Support for Black Lives Matter protests is falling across the country after months of unrest that has seen people killed, shops burned, and frequent clashes between activists and police.

University of Michigan political scientist Christian Davenport put the change down to ‘compassion fatigue’, as outrage over videos such as the one of George Floyd has faded, with people now wanting a return to their everyday lives.

The shift also appears to have been driven by perceptions of violence, with almost a third of Americans saying the protest are now ‘mostly or always violent’, up from 22 per cent three months ago.

The figures will be watched closely by politicians on both sides of the aisle, with both Joe Biden and Donald Trump presenting themselves as the ‘law and order’ candidate with the November election looming.

It also comes amid fresh unrest across the country following the indictment of one police officer over the fatal shooting of Breonna Taylor, though not for the shots that killed her, which sparked fresh unrest. 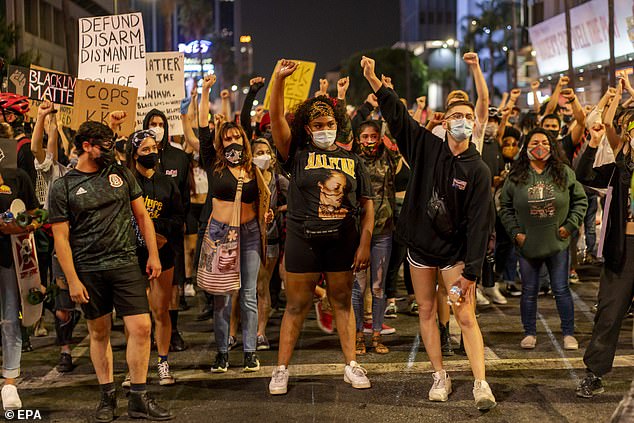 Support for Black Lives Matter protests has fallen across the country in the last three months, as perceptions around violence at the marches has shifted 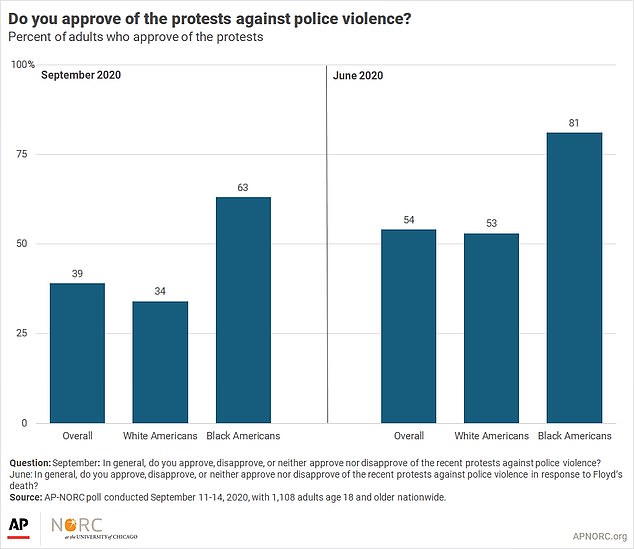 In June, after the death of George Floyd, 54 per cent of Americans said they supported the protests, while just 39 per cent do now – with support falling among blacks and whites 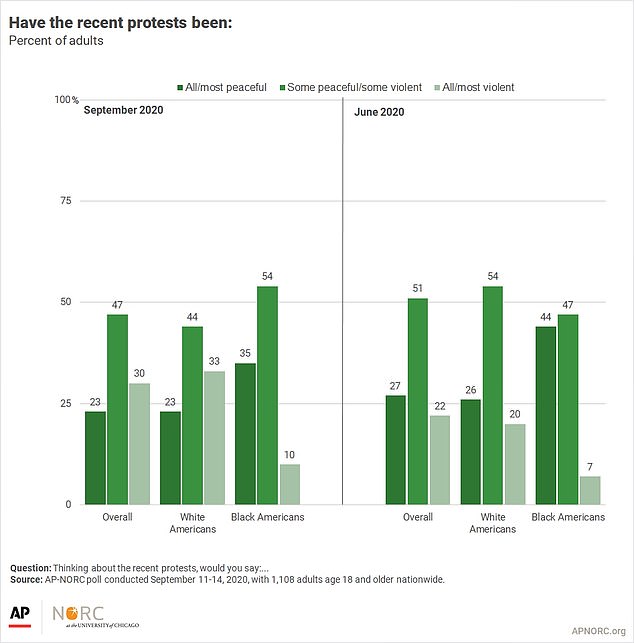 Americans were also more likely to see the protests as ‘all violent’, with the biggest shift coming among whites, though opinion is also shifting among black Americans

The shift in support for the protesters was most pronounced among white Americans, 20 per cent of whom believed protests were mostly or all violent back in June, rising to 33 per cent now.

A similar shift was observed among black Americans, though to a much lesser extent – seven per cent saw protests as ‘all or mostly violent’ back in June, compared to 10 per cent now.

The number of black Americans who saw the protests as ‘almost all peaceful’ also fell, from 44 per cent in June to 35 per cent now.

The number who saw the demonstrations as ‘sometimes violent’ grew from 47 per cent to 54 per cent.

The poll was conducted by The Associated Press along with the University of Chicago’s NORC Center for Public Affairs Research, between September 11 and 14.

That means the survey was carried out before the decision to charge one police officer over the death of Breonna Taylor was announced, which sparked more unrest and violence across the country. 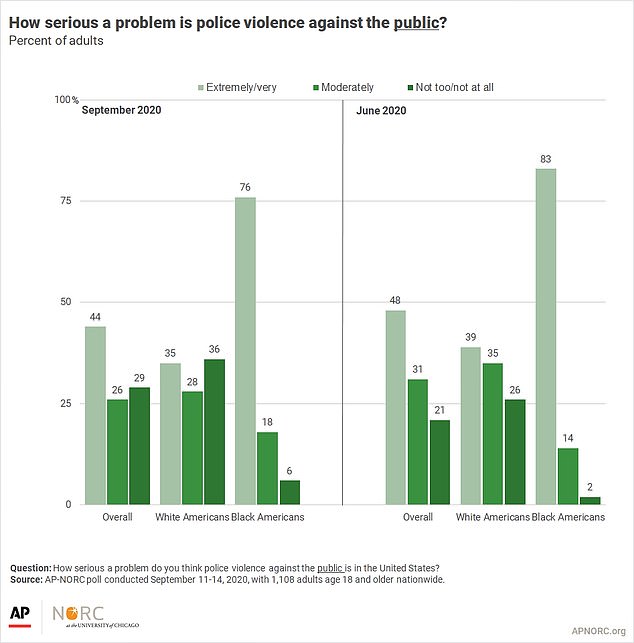 Americans were also much less likely to agree with the statement that violence against the public is a ‘very serious problem’, with the largest shift coming among whites 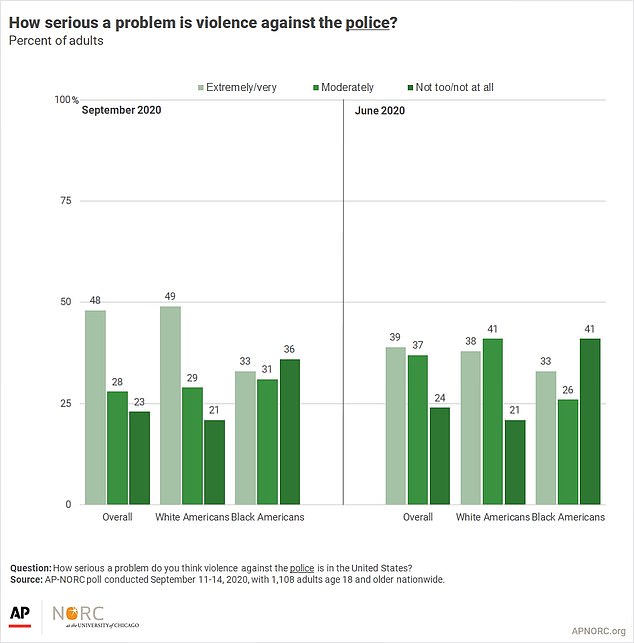 Meanwhile, Americans were much more concerned with violence against the police in September than three months previously

Two officers were wounded by gunfire at protests in Louisville, where authorities made close to 100 arrests on charges of damaging businesses, refusing to disperse after curfew and unlawful assembly.

The poll finds the percentage of Americans who believe police violence unequally targets Black Americans and that greater consequences for police brutality are necessary have also fallen from June, when an AP-NORC survey found sweeping changes in how Americans view these issues.

The June survey followed the late May killing of George Floyd at the hands of Minneapolis police, which renewed focus on Taylor’s earlier death, in March.

On Wednesday, a Kentucky grand jury declined to charge any officers for their role in Taylor’s killing; she was shot multiple times after officers entered her home using a no-knock warrant during a narcotics investigation.

Kentucky Attorney General Daniel Cameron said an investigation of the case yielded evidence that officers announced themselves before entering.

It was Floyd’s death in Minneapolis – captured on video by witnesses – that sparked several months of nationwide unrest in which hundreds of thousands of Americans protested against systemic racism and police brutality.

Others, including President Donald Trump, expressed solidarity with police and law enforcement officers.

The new poll finds the recent shift in opinion is pronounced among white Americans and Republicans, whose views on police violence and racial inequity in policing look closer to the way they did in 2015, before Trump was elected.

Just 35% of white Americans approve of the protests now, while 50% disapprove. In June, 53% approved, while 34% disapproved. 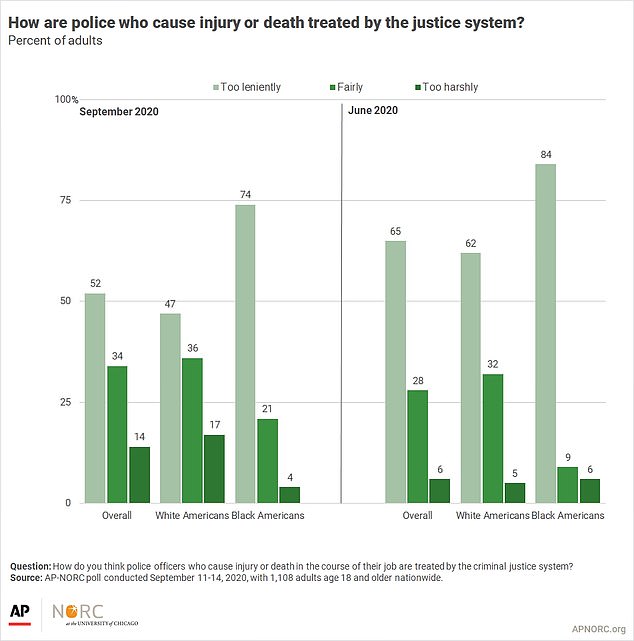 However, a majority of Americans still agree that police who cause death and injury are still treated too lightly by the justice system 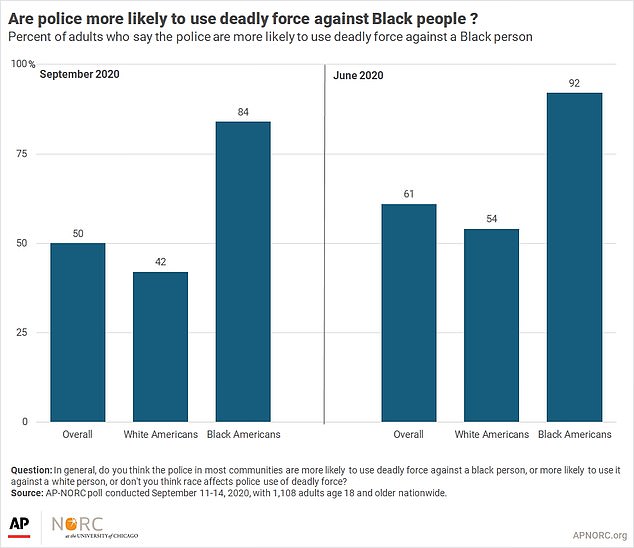 Among Latinos, 31% approve, compared with 44% in June; 63% of Black Americans support the protests, down from 81%, with more now saying they neither approve nor disapprove.

‘I was supportive back in June, but after seeing everything up until now, I’m almost dead against them,’ said Dave Hipelious, 63, of New Lenox, Illinois, who is a retired pipe fitter in the energy industry.

Hipelious, who is white, said his support for the protests soured when he saw violent unrest, arson and looting that marred the largely peaceful demonstrations following Floyd’s death.

‘I was a pretty wild young man,’ Hipelious said. ‘Every time the police stopped me, and every issue I had with them, I was completely in the wrong. I do believe they are doing their job right.’

Eighty-four percent of Black Americans, but just 42% of white Americans and 50% of Latinos, say police more often use deadly force against a Black person than a white person.

While 74% of Black Americans say the criminal justice system is too lenient when officers cause injury or death, 47% of white Americans and 50% of Latinos say the same.

‘When this was all about the video and the visceral response to seeing someone’s life get squeezed out of them, that’s fine,’ Davenport said.

‘But from the moment that topic is raised to awareness, the clock starts ticking with regards to, `How quickly can we resolve this so I can get back to my normal life?” 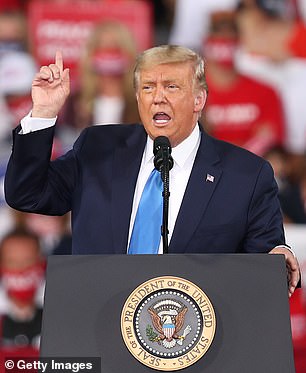 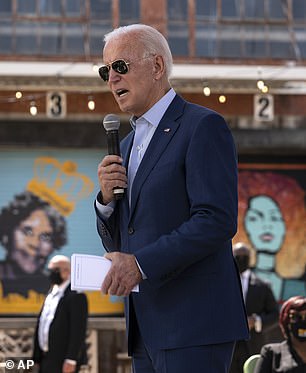 The figures will be watched closely by both Donald Trump and Joe Biden, both of whom are positioning themselves as the ‘law and order’ candidate at the election 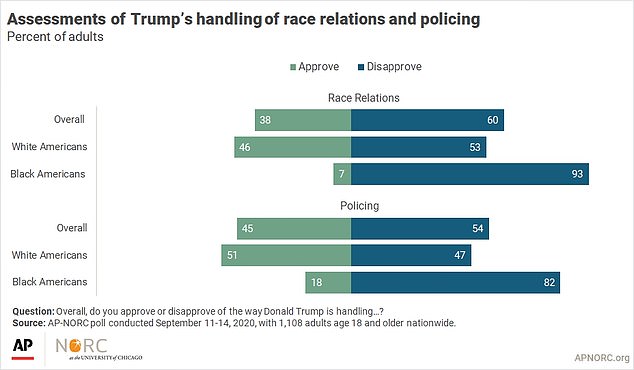 A majority of Americans believe that Trump is doing a bad job of both race relations and policing, though the President holds a narrow lead among whites on the issue of policing

The change also comes after months of political sparring between Democrats and Republicans, including Trump. Both sides hope to use the protests to their advantage in the upcoming general election.

And more Republicans now describe protests as mostly or all violent, 52% vs. 36%.

BriAndia Andrews, 21, of Bloomington, Illinois, who is Black, said she believes most of the protests have been done ‘correctly.’ Still, she feels ‘our voices are not going to be heard once you have people looting and stuff like that.’

Given how race in America has become a key focus of politics this year, Andrews said she believes opinions about the protests among white Americans and Republicans only changed because of Trump’s rhetoric.

‘If you’re a Trump supporter and you were also protesting, that could have influenced your opinion of the protests,’ she said.

Overall, Americans are less likely than they were in June to say deadly force is more commonly used against a Black person than a white person, 50% vs. 61%.

And fewer now say that officers who cause injury or death on the job are treated too leniently by the justice system, 52% vs. 65%.

The poll reflects a reality that, despite an unprecedented show of support for the movement over the summer, a majority have not participated, said the Rev. Starsky Wilson, the incoming president of the Children’s Defense Fund.

‘We have malformed memory about what peaceful assembly and public protest has always looked like,’ said Wilson, who served as co-chair of the Ferguson Commission, a group that recommended reforms after the 2014 police shooting death of Michael Brown in Ferguson, Missouri.