Japan has marked the 75th anniversary of the Hiroshima atomic bombing with a memorial service led by Prime Minister Shinzo Abe as survivors urge for a ban on nuclear weapons.

Prime Minister Shinzo Abe was joined by survivors, their relatives and officials to mark the 8.15am blast anniversary with a minute of silence at Hiroshima’s Peace Memorial Park before laying a wreath.

An upsurge of coronavirus cases in Japan meant a much smaller turnout than had been expected.

The bombing survivors that did turn out, who now have an average age is about 83, continued to press for nations to abolish their nuclear arsenals – with their own government refusing to sign a nuclear weapons ban treaty. 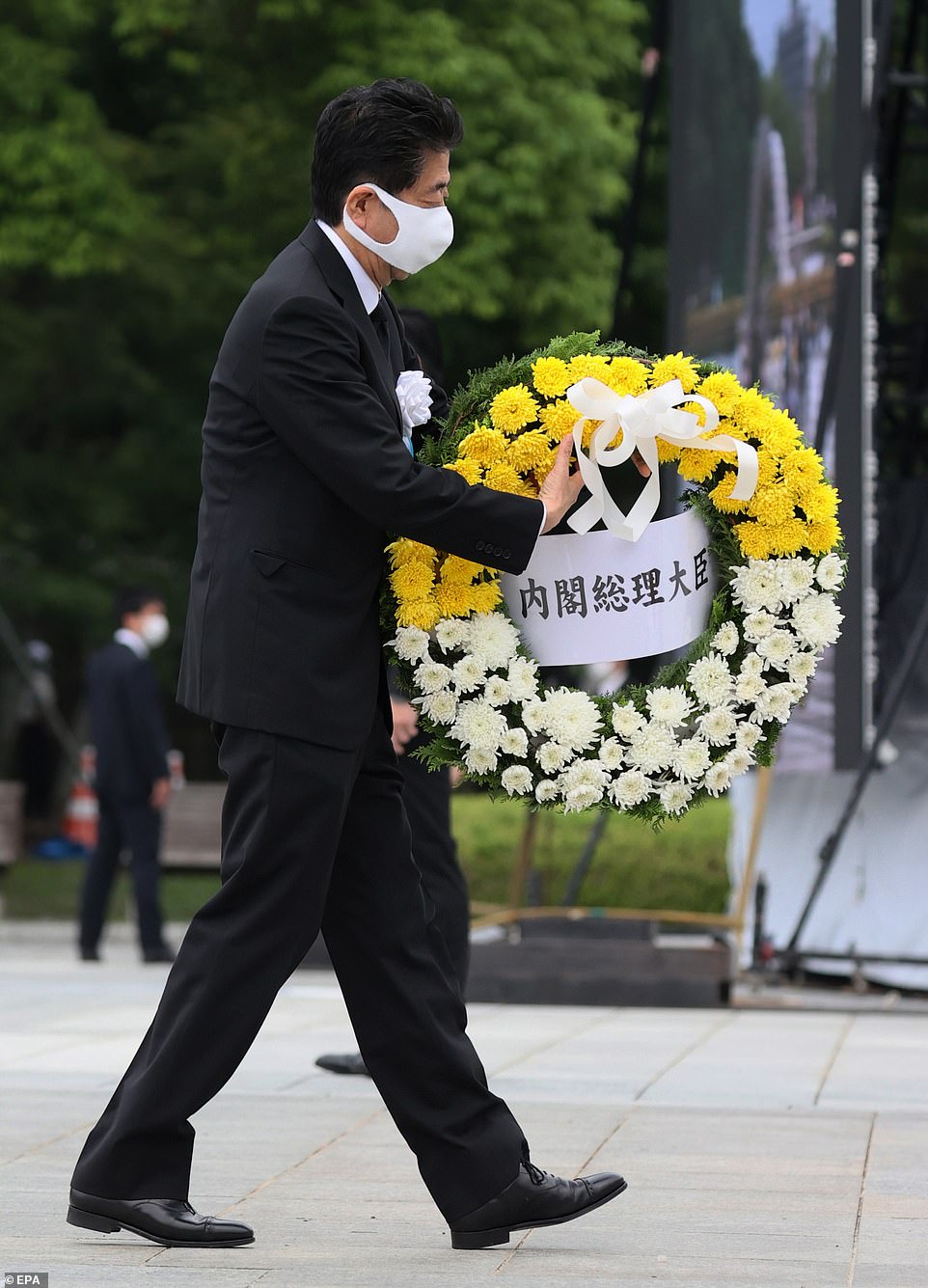 Prime Minister Shinzo Abe (pictured) was joined by survivors, their relatives and officials to mark the 8.15 am blast anniversary with a minute of silence at Hiroshima’s Peace Memorial Park before laying a wreath

The United States dropped the world’s first atomic bomb on Hiroshima on August 6, 1945, destroying the city and killing 140,000 people.

A second bomb was dropped three days later on Nagasaki, killing another 70,000.

Japan surrendered on August 15, ending World War II and its nearly half-century of aggression in Asia.

But the decades since have seen the weapons stockpiling of the Cold War and a nuclear standoff among nations that continues to this day. 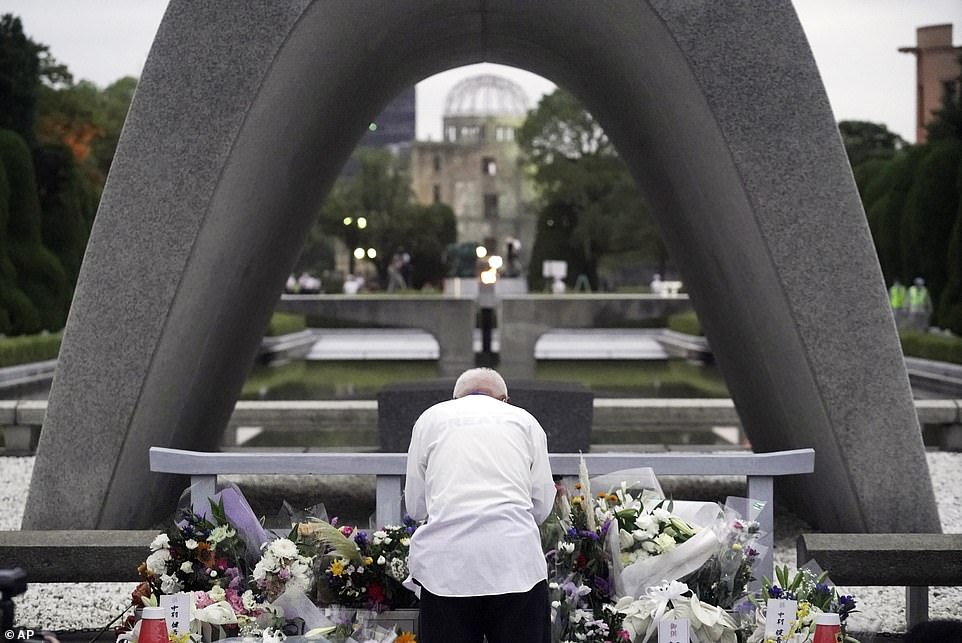 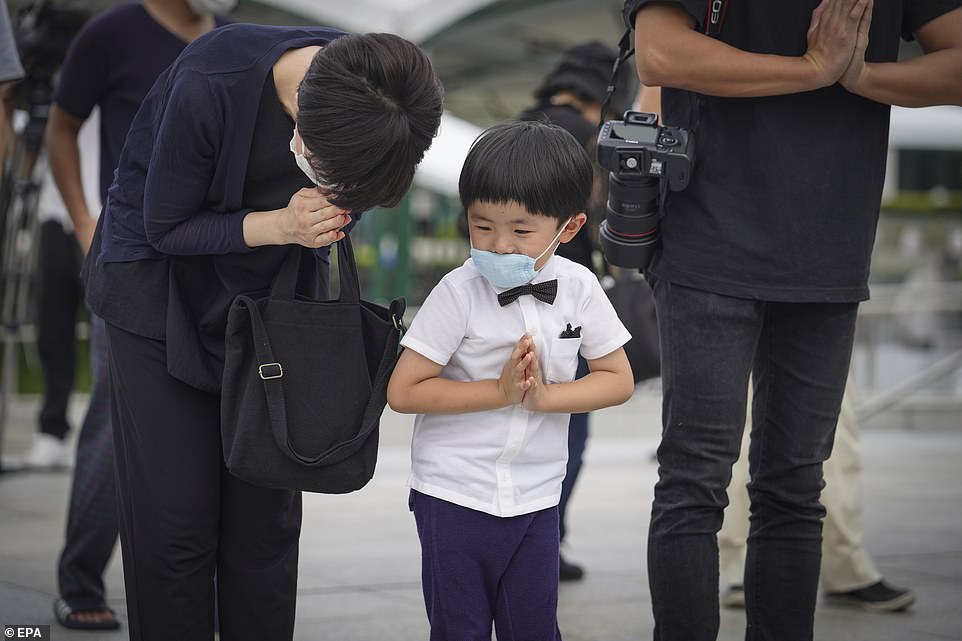 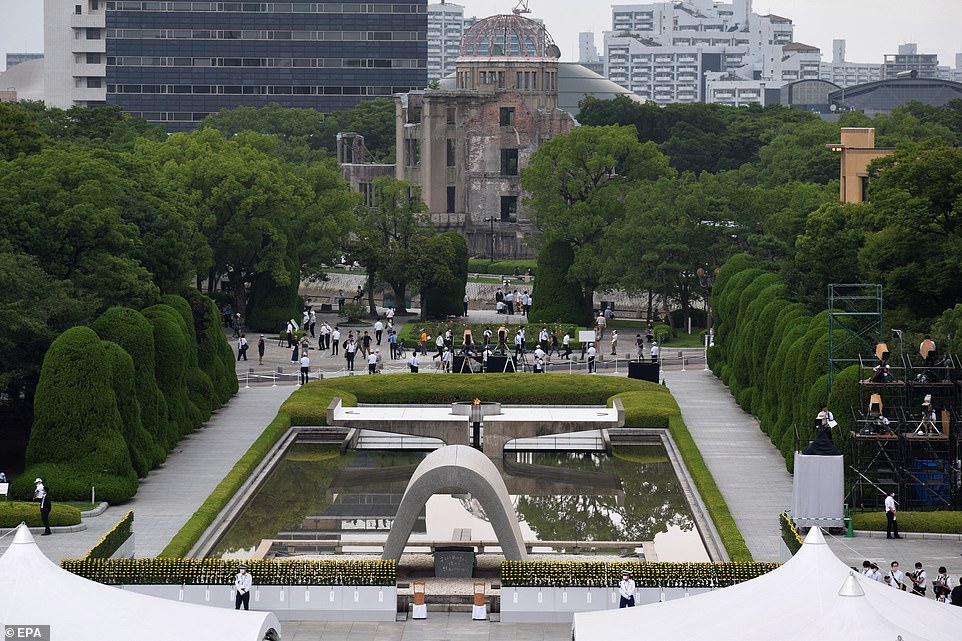 Amid the solemn remembrances at Hiroshima’s peace park, Prime Minister Shinzo Abe was confronted by six members of survivors’ groups over the treaty.

‘Could you please respond to our request to sign the Nuclear Weapons Prohibition Treaty?’ Tomoyuki Mimaki, a member of a major survivors’ group, Hidankyo, implored Abe.

‘The milestone 75th anniversary of the atomic bombing is a chance’ to change course. 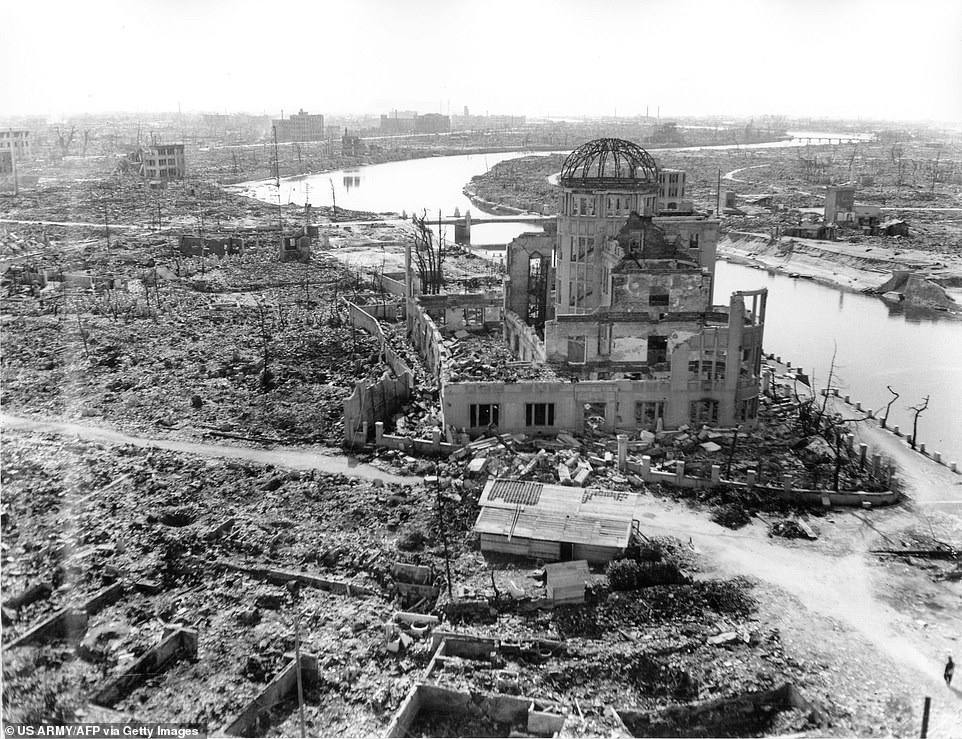 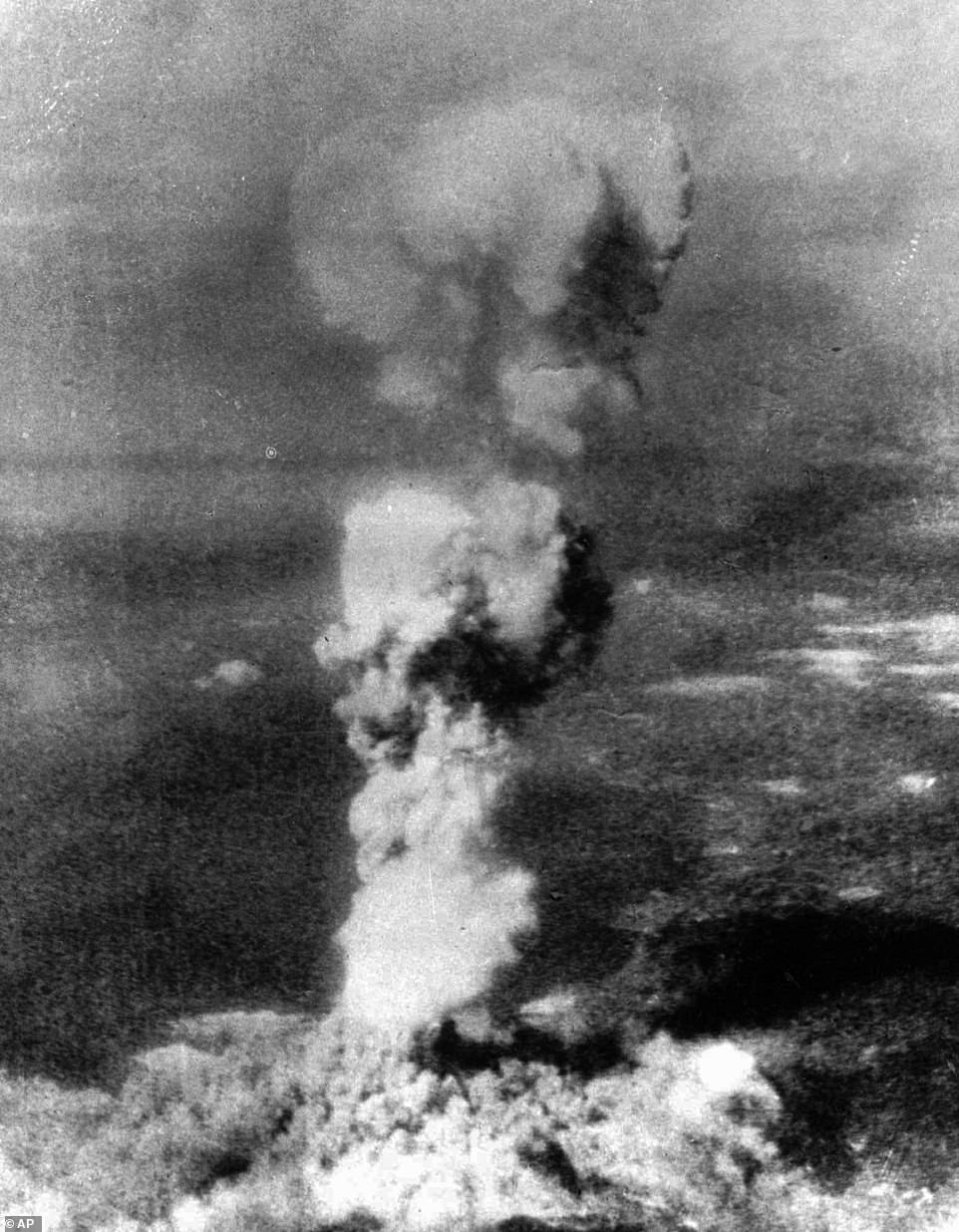 Smoke pictured rising 20,000 feet above Hiroshima, western Japan, after the first atomic bomb was dropped during warfare in August 1945

Abe insisted on Japan’s policy not to sign the treaty, vaguely citing a ‘different approach,’ though he added that the government shares the goal of eliminating nuclear weapons.

‘Abe’s actions don’t seem to match his words,’ said Manabu Iwasa, 47, who came to the park to pray for his father, a bombing survivor who died at age 87 in March.

‘Japan apparently sides with the United States, but it should make more efforts to eliminate nuclear weapons. It’s frustrating, but there is not much we individuals can do.’ 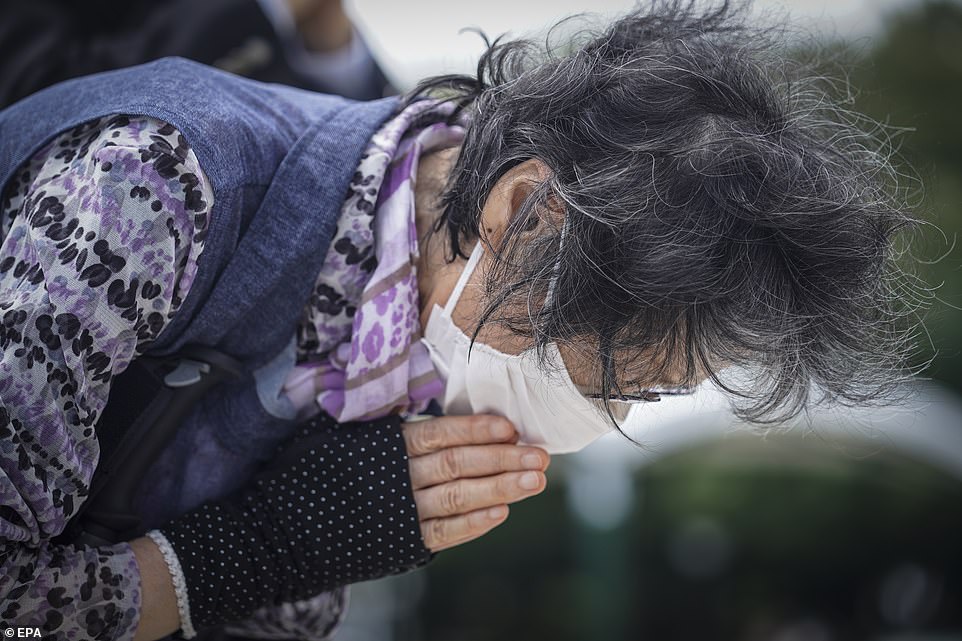 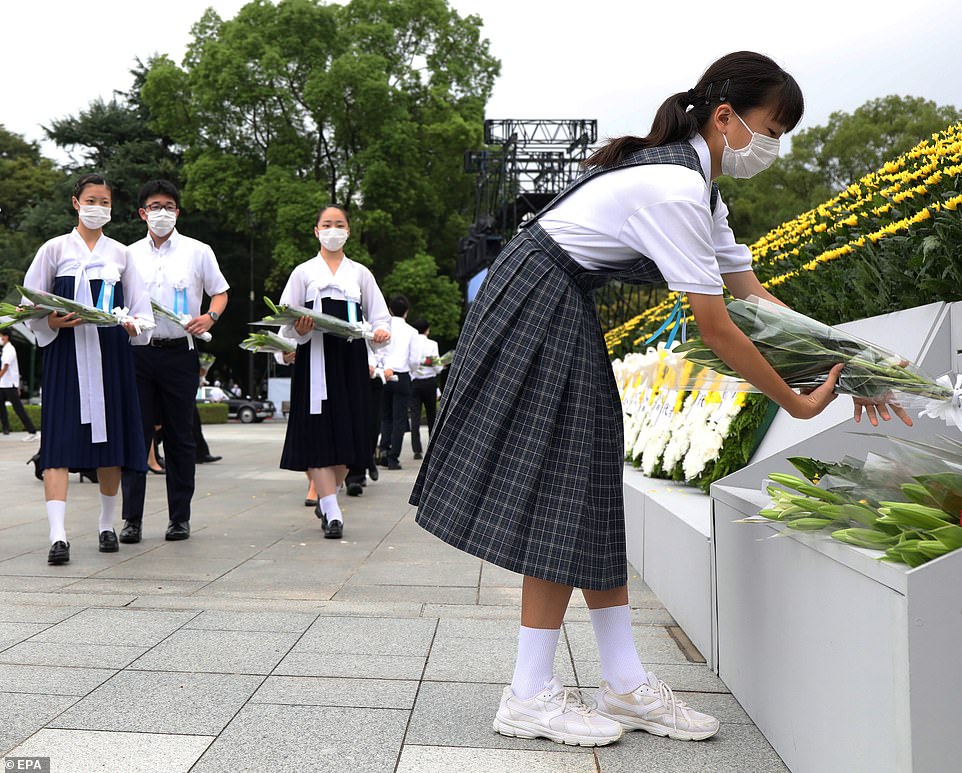 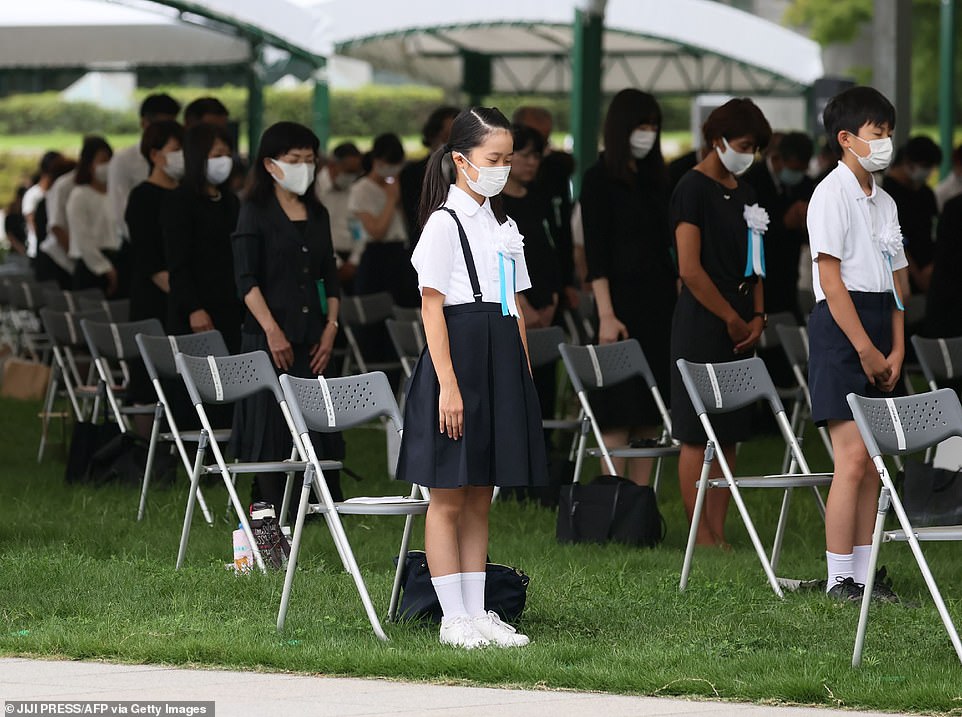 There were thought to be fewer than 1,000 attendees which was one-tenth of those who had attended in past years (attendees pictured observing a minute silence)

Even though Tokyo renounces its own possession, production or hosting of nuclear weapons, Japan is a top U.S. ally, hosts 50,000 American troops and is protected by the U.S. nuclear umbrella. This complicates the push to get Tokyo to sign the treaty adopted in 2017, especially as it steps up its military role amid North Korea’s continuing pursuit of a stronger nuclear program.

Abe, in his speech at the ceremony, said a nuclear-free world cannot be achieved overnight and it has to start with dialogue.

‘Japan’s position is to serve as a bridge between different sides and patiently promote their dialogue and actions to achieve a world without nuclear weapons,’ Abe said.

‘I ask the Japanese government to heed the appeal of the (bombing survivors) to sign, ratify and become a party to the Treaty on the Prohibition of Nuclear Weapons,’ Matsui said in his peace declaration. ‘As the only nation to suffer a nuclear attack, Japan must persuade the global public to unite with the spirit of Hiroshima.’

Thursday’s peace ceremony at the Hiroshima Peace Memorial Park was scaled down because of the coronavirus pandemic.

There were thought to be fewer than 1,000 attendees which was one-tenth of those who had attended in past years. 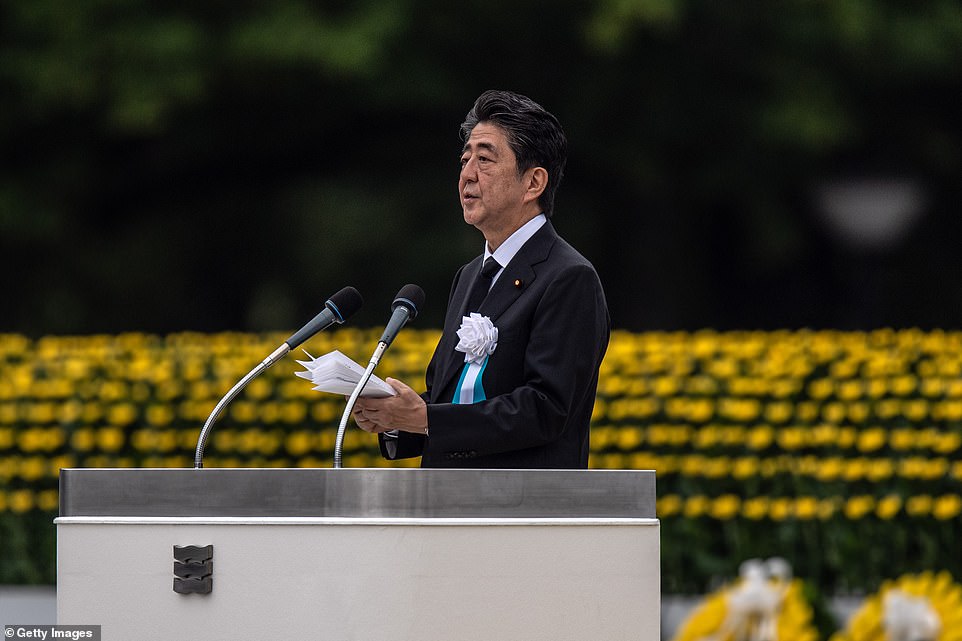 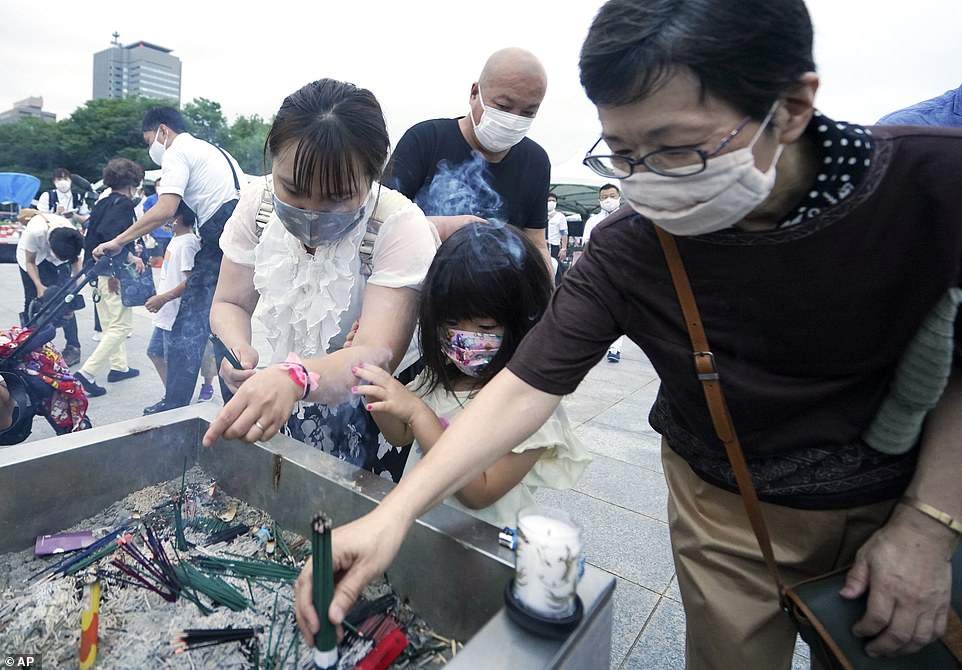 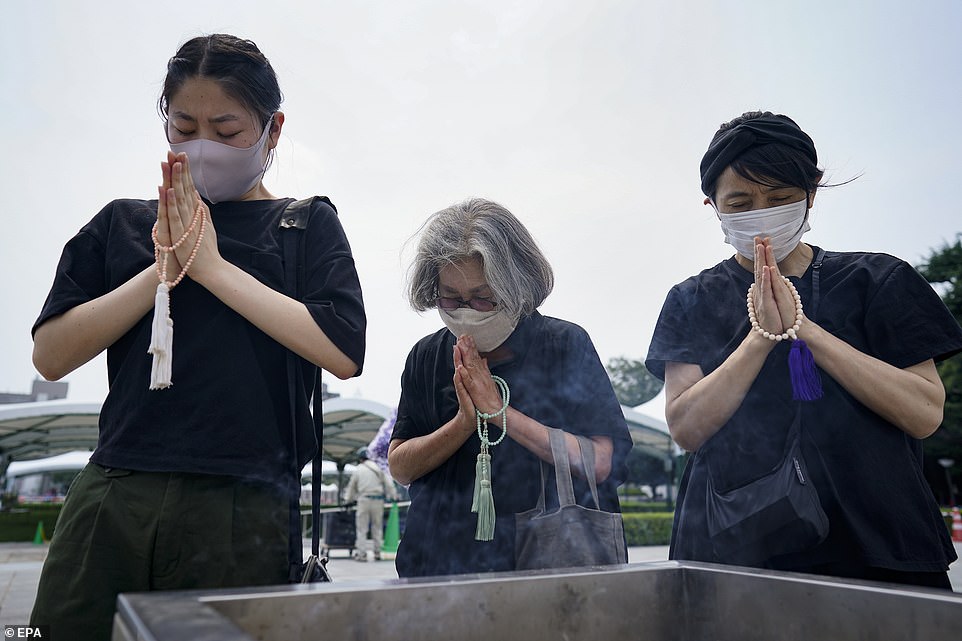 Women wearing face masks amid the coronavirus crisis were seen praying in front of a cenotaph to honour the 140,000 who were killed when an atomic bomb fell on Hiroshima in 1945

Some survivors and their relatives prayed at the park’s cenotaph before the ceremony. The registry of the atomic bombing victims is stored at the cenotaph, whose inscription reads, ‘Let all the souls here rest in peace, for we shall not repeat the mistake.’

‘Seventy-five years is far too long not to have learned that the possession of nuclear weapons diminishes, rather than reinforces, security,’ he said. ‘Today, a world without nuclear weapons seems to be slipping further from our grasp.’ 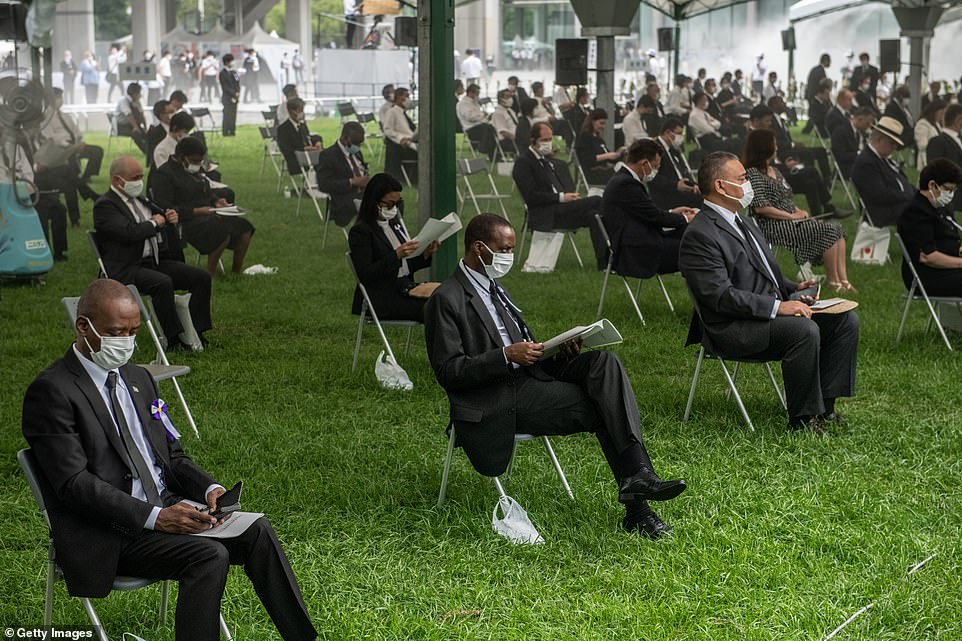 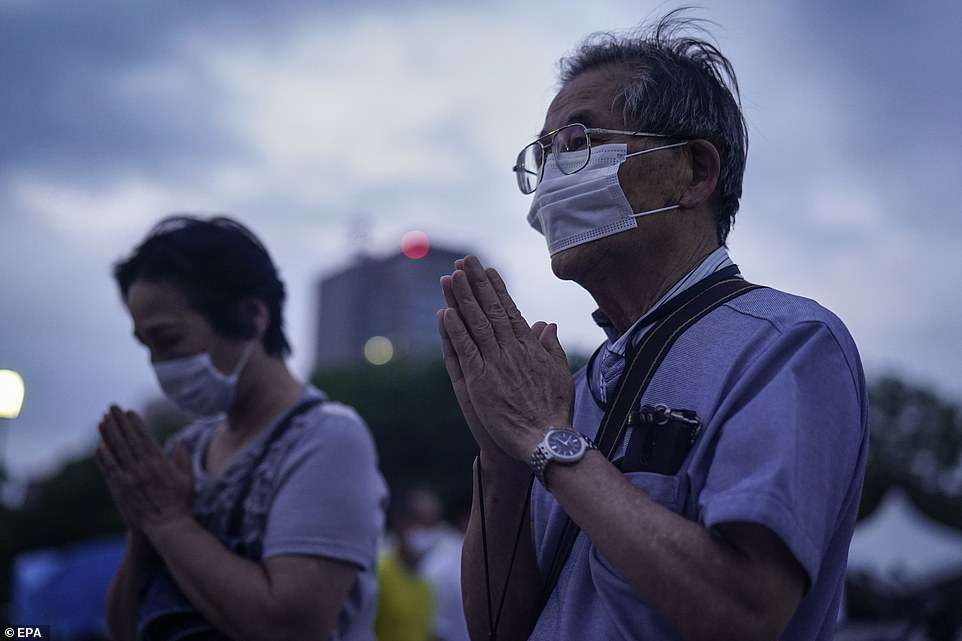 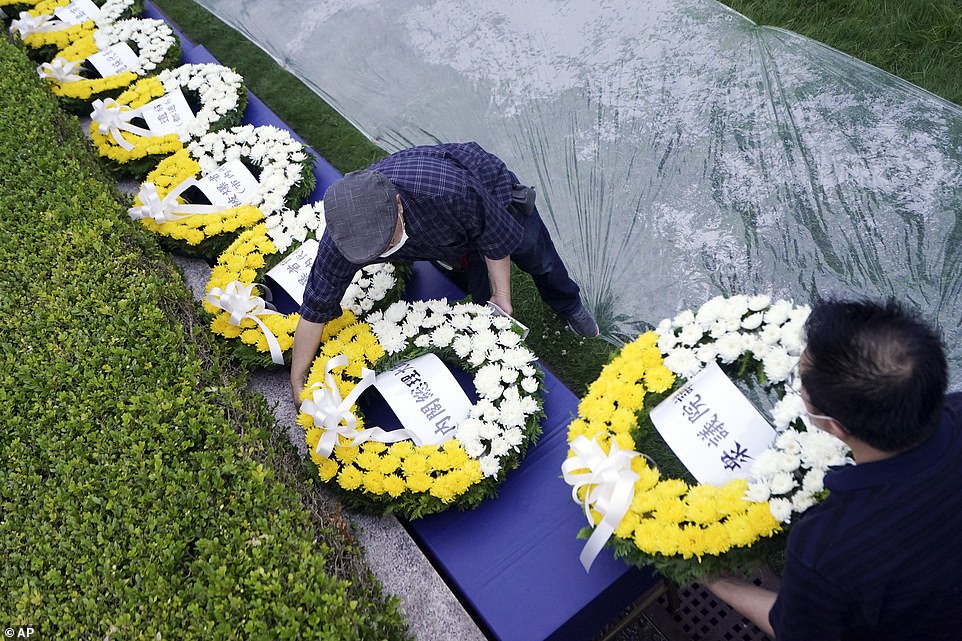 An aging group of survivors, known as hibakusha, feel a growing urgency to tell their stories, in hopes of reaching a younger generation.

Many peace events, including their talks, leading up to the anniversary were cancelled because of the coronavirus, but some survivors have teamed with students or pacifist groups to speak at online events, sometimes connecting with international audiences.

The bombing’s survivors lamented the slow progress of nuclear disarmament and expressed anger over what they said was the Japanese government’s reluctance to help and listen to those who suffered. 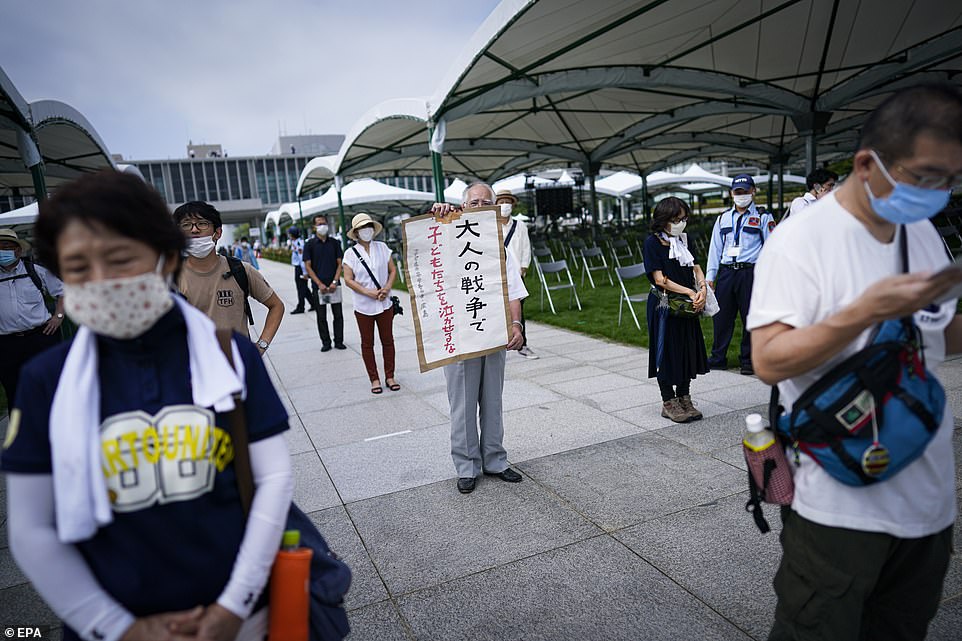 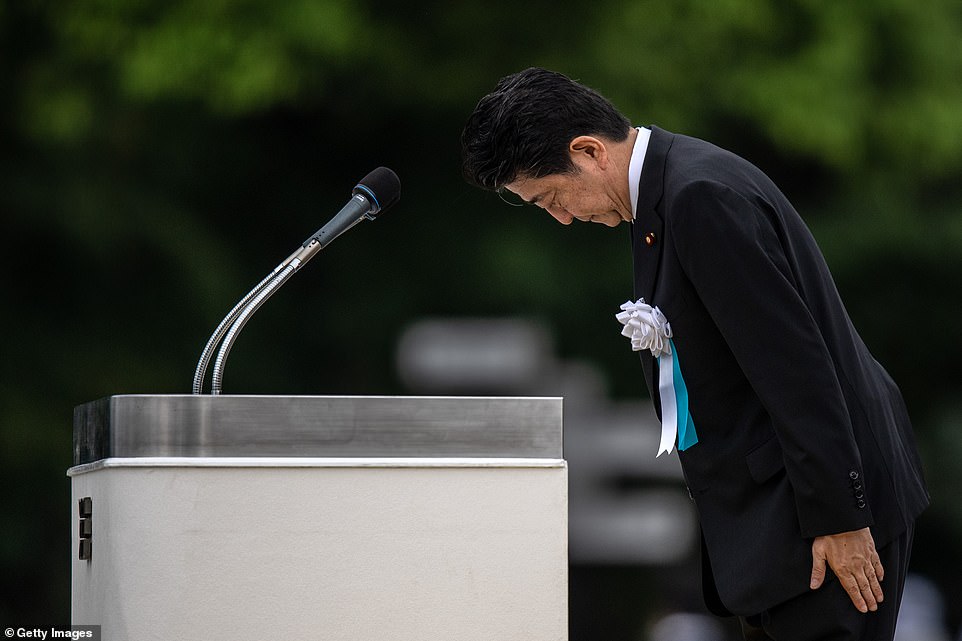 Amid the solemn remembrances at Hiroshima’s peace park, Prime Minister Shinzo Abe was confronted by six members of survivors’ groups over the government’s refusal to sign a nuclear weapons ban treaty 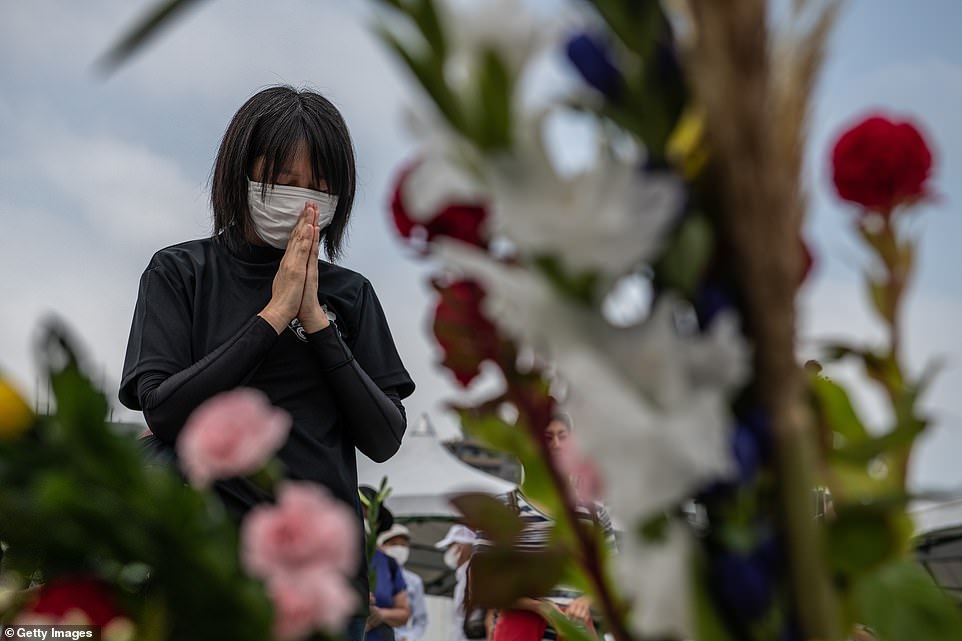 They want world leaders, especially those from nuclear-weapons states, to visit Hiroshima and see the reality of the atomic bombing.

‘Many survivors are offended by the prime minister of this country because he does not sign the nuclear weapons prohibition treaty,’ said Ogura.

How Hiroshima became the victim of the atomic bomb in 1945

Why was Hiroshima chosen as a target?

Historians say the United States picked it as a suitable target because of its size and landscape, and carefully avoided fire bombing the city ahead of time so American officials could accurately assess the impact of the atomic attack.

The United States said the bombings hastened Japan’s surrender and prevented the need for a US invasion of Japan but there is still much debate over this as some historians today say Japan was already close to surrendering. 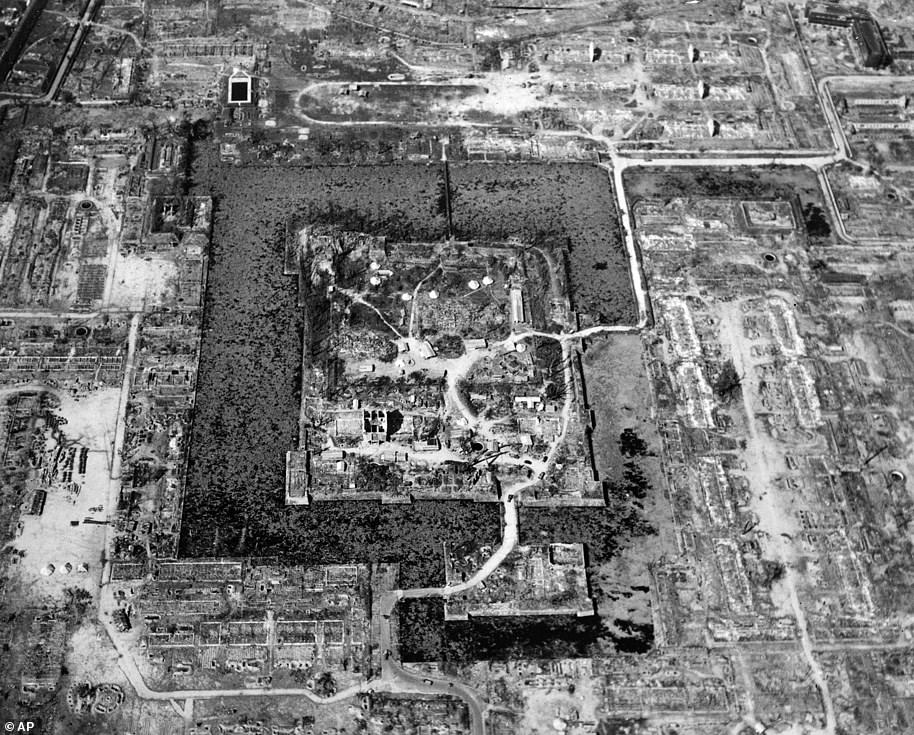 After the atomic bomb was dropped almost everything within 1.2 miles of ground zero was destroyed by the blast and heat rays (a photo released by the U.S. Air Force showed the total destruction of Hiroshima)

What happened in the attack?

Seconds after the detonation the estimated temperature was 3,000-4,000C at ground zero with almost everything within 1.2 miles of ground zero was destroyed by the blast and heat rays.

Within one hour, a ‘black rain’ of highly radioactive particles started falling on the city, causing additional radiation exposure.

How many people were killed?

An estimated 140,000 people, including those with radiation-related injuries and illnesses, died up to December 31, 1945.

To date, the total death toll, including those who died from radiation-related cancers, is about 300,000. Hiroshima today has 1.2 million residents. 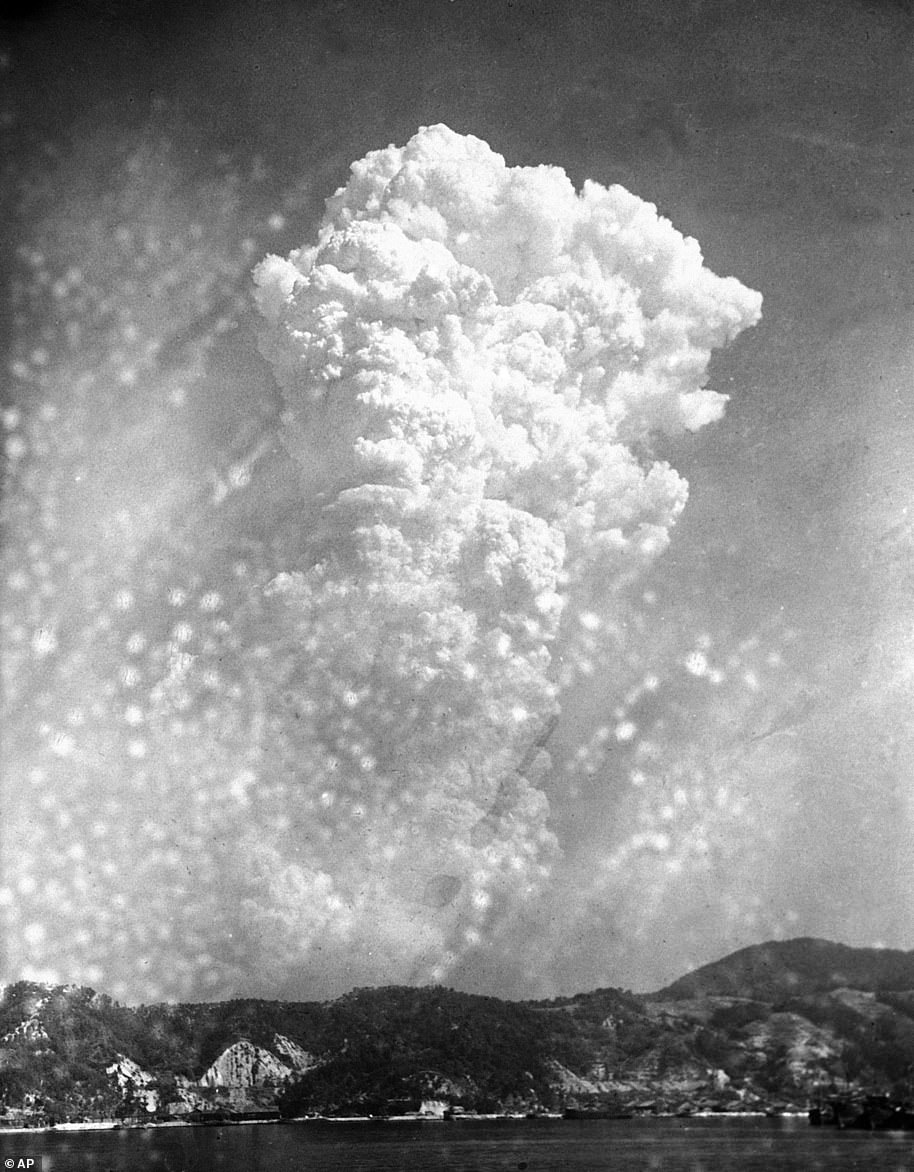 Within one hour, a ‘black rain’ of highly radioactive particles started falling on the city, causing additional radiation exposure (aftermath of the blast pictrued)

What effect did radiation have?

Many people exposed to radiation developed symptoms such as vomiting and hair loss but most of those with severe radiation symptoms died within three to six weeks.

Others who lived beyond that developed health problems related to burns and radiation-induced cancers and other illnesses.

Survivors have a higher risk of developing cataracts and cancer.

About 136,700 people certified as ‘hibakusha’, as victims are called, under a government support program are still alive and entitled to regular free health checkups and treatment.

Health monitoring of second-generation hibakusha began recently. Japan’s government provided no support for victims until a law was finally enacted in 1957 under pressure from them. 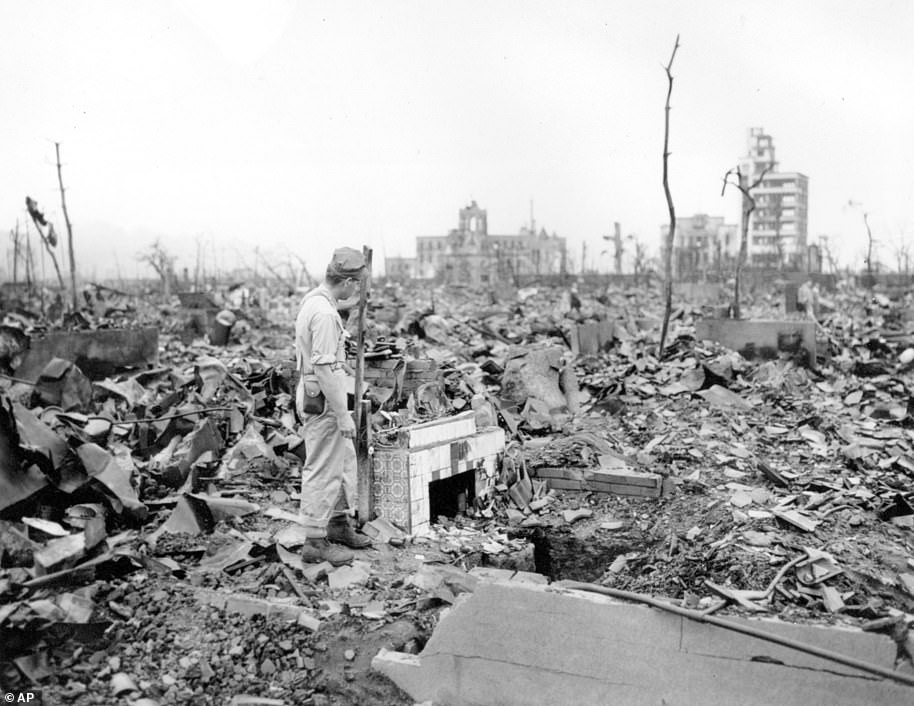 Historians say the United States picked it as a suitable target because of its size and landscape, and carefully avoided fire bombing the city ahead of time so American officials could accurately assess the impact of the atomic attack (aftermath pictured)

What are those colourful folded paper cranes for?

Origami paper cranes can be seen throughout the city.

They became a symbol of peace because of a 12-year-old bomb survivor, Sadako Sasaki, who, while battling leukaemia, folded paper cranes using medicine wrappers after hearing an old Japanese story that those who fold a thousand cranes are granted one wish.

Sadako developed leukaemia 10 years after her exposure to radiation at the age of two, and died three months after she started the project.

Former US President Barack Obama brought four paper cranes that he folded himself when he visited Hiroshima in May 2016, becoming the first serving American leader to visit.