Yorta Yorta woman Muriel Bamblett is driven by a desire to give Indigenous children in out-of-home care 'a connection to culture' – sometimes taking them across Australia to dig their toes deep into the dirt that is home.

That connection to culture has been identified in the Productivity Commission's report on Aboriginal and Torres Strait Islander disadvantage as key to many Indigenous Australians' identity and strength, and the foundation to build wellbeing. 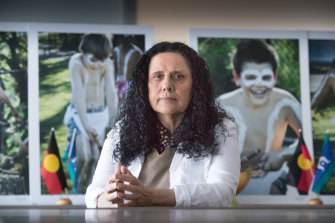 Professor Bamblett, the chief executive of the Victorian Aboriginal Child Care Agency and the Aboriginal Children's Forum, said Aboriginal-led programs were reuniting children at double the rate of non-Indigenous services.

Giving these vulnerable children and young people pride in their culture and connecting them with country was part of the program, she said.

Overcoming Indigenous Disadvantage 2020, the most comprehensive report of its kind, also finds deaths from suicide and self-harm increased by 40 per cent over the 10 years to 2018. The proportion of Indigenous people experiencing psychological distress has risen from 27 per cent in 2004/05 to 31 per cent in 2018/19.

The report contrasts alarming areas of concern with areas of improvement, including health and education, with more Indigenous people finishing school and going on to further education and getting jobs. It also notes more non-Indigenous people felt it was important to know about Indigenous culture and history than before.

The Productivity Commission chair Michael Brennan stressed the results needed to be understood in context. "Poorer outcomes are not due to people being Aboriginal or Torres Strait Islander, but can be attributed to the additional personal challenges and structural barriers faced by [them]."

He said it was critical to remove those barriers, such as laws and practices that operated in an "unfair way", if the wellbeing of Indigenous Australians was to improve.

Many of the barriers appeared "neutral" on face value, yet they penalised Aboriginal and Torres Strait Islander people because of their circumstances and the disadvantage they experience.

The report notes when services are not accessible or adapted to Indigenous needs, the consequences can be long term. Failure to register a birth and obtain a birth certificate can make it difficult for a child to be enrolled in school and later to obtain a driver's licence or tax file number, limiting access to education and employment. In remote and rural areas with a lack of public transport, offences connected to driving without a licence lead to higher rates of incarceration.

Most Aboriginal and Torres Strait Islander people had never been in jail. Yet they faced more risk factors that made it more likely, including unemployment, low socioeconomic status and poor mental health.

The report found adult imprisonment rate increased 72 per cent from 2000 to 2019, and the rate of youth detention had stayed 22 times the rate of non-Indigenous youth.

A lack of secure accommodation can often mean Aboriginal and Torres Strait Islander people won't be granted bail. Often that results in young people and adults being held longer in custody.

Professor Bamblett's Aboriginal Children's Forum, a partnership with the government and the community sector, had increased the number of children in care who were managed by Aboriginal organisations by 250 per cent since July 2017.

With far better rates of reuniting children, if the model was rolled out across Victoria it would mean another 800 of the 2200 Indigenous children in care would be returned to their families or relatives.

She recalled a young person in out-of-home care who was so disconnected from his culture and community that he referred to Aboriginal people as "you" and "them". When she took the boy to visit his people in Framlingham Victoria, elders told him that his people were warriors.

On the way home, Professor Bamblett said, the boy started talking about "my people, my land". "Children really do need to feel a connection," she said.