£100,000 for each rough sleeper: Taxpayers to fund radical scheme to give the homeless a roof and to help them kick drink and drug addictions

A radical new scheme to help the homeless will cost taxpayers as much as £100,000 for every rough sleeper on the streets.

The Housing First project, designed to give street sleepers a roof and help to kick drugs and drink, comes with a price tag high enough to buy a home for every rough sleeper it might help.

The scheme was launched by ministers as part of £1.2 billion spending on ‘breaking the homelessness cycle’ and three areas have been picked for trial projects that will offer ‘intensive support’ in the hope of rebuilding the lives of street people. 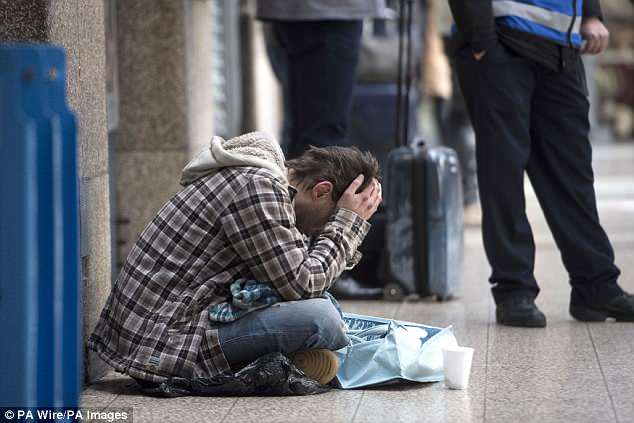 A radical new scheme to help the homeless will cost taxpayers as much as £100,000 for every rough sleeper on the streets (stock image)

However the £25.3 million to be handed over to run the trials will help only a comparative handful of rough sleepers. In Greater Manchester the programme will be funded with £8 million from the Ministry of Housing, Communities and Local Government.

Latest figures on rough sleepers produced by the Ministry show that last autumn Greater Manchester councils said they had a total of 268 rough sleepers – a street population that means Housing First will cost taxpayers just under £30,000 for each one.

In the West Midlands, a second scheme will cost £9.6 million in a region that recorded 295 rough sleepers last autumn. The budget amounts to over £32,500 for each street sleeper.

The third trial is go ahead on Merseyside, with a budget of £7.7 million. But the six councils of the Liverpool City Region covered by the project found last autumn they had 69 rough sleepers – a total that means Housing First will cost taxpayers £111,594 for every street sleeper in the region.

In Liverpool the money to be spent on each rough sleeper would buy a three-bedroom terraced house. In Birmingham and Manchester £30,000 would buy an entry-level studio or one-bedroom flat.

Like Housing First, the Troubled Families Scheme involved intensive help to persuade people to change for the better. Anti-social households were supposed to receive assistance in sending children to school, cleaning house, preparing meals and getting work.

Academic and author Patricia Morgan, an early critic of the Troubled Families Scheme, said: ‘People have been pushing wonder programmes like this for decades. It used to be criminals whose lives would be transformed.

‘But in practice you cannot do that to people. There are people who do not want to be helped. People have their own agendas. The wonder programmes never work.

‘This is another utopian solution which is going to waste a lot of money and then be kicked into the long grass when it fails – as was the Troubled Families Scheme.’

Housing Secretary James Brokenshire said: ‘The evidence shows Housing First has an incredible rate of success in providing rough sleepers with the support they need to get off the streets and to rebuild their lives. 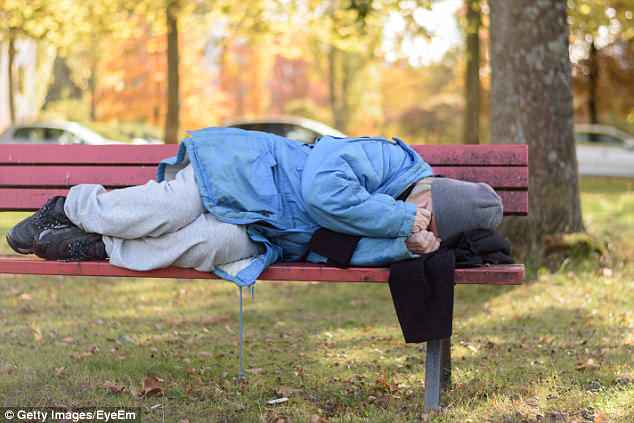 In the West Midlands, a second scheme will cost £9.6 million in a region that recorded 295 rough sleepers last autumn (stock image)

‘I believe these pilots will have a positive impact in their areas and I look forward to hearing about their successes over the coming months.’

A Ministry spokesman said that ‘Housing First is a tried and tested approach to tackling long-term rough sleeping that puts the emphasis on finding individuals a secure and affordable home to live in, while providing them with expert support to rebuild their lives.

‘In Europe, Housing First projects have been successful at ending homelessness for at least eight out of 10 people in the scheme. This is compared to hostel-based accommodation which has resulted in between 40 per cent and 60 per cent of users with complex needs leaving, or ejected, before their homelessness is resolved.’

Rough sleeping statistics published by the Ministry say that local counts and estimates carried out over single nights during October and November last year produced a total 4,751 rough sleepers in England. This was up by 617 on the 2016 total of 4,134.

However the Ministry said that counting or estimating street sleepers was ‘inherently difficult’ and the figures were ‘subject to some limitations.’