Individual politicians are spending thousands of dollars a week of taxpayers' money to boost their "likes" and push political messages on social media, with data released for the first time by Facebook’s Ad Library revealing how much MPs of all political stripes spend on the platform.

Politicians defended their use of advertising for social media likes as a way to connect with voters in the digital age, and pointed out it was cheaper than old-fashioned letter box drops.

The data shows Energy and Emissions Reduction Minister Angus Taylor topped the list of local politicians buying Facebook ads in the past month. In the 30 days to September 23, Mr Taylor sank $12,599 into 27 ads on the company's platforms, which include Instagram. 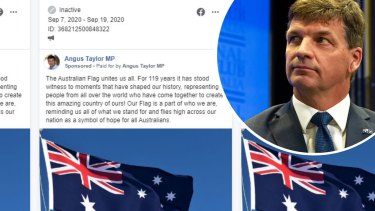 Mr Taylor spent at least $3300 on six ads promoting Australian National Flag Day, proclaimed in 1996 to celebrate the first time the flag was flown on September 3, 1901. But many of Mr Taylor's ads did not start running until after the event.

"Minister Taylor will continue to use a number of different mediums to reach out, engage and listen," Mr Taylor's spokesman said. "Social media is just one of many ways in which we work to keep the public informed about electorate and parliamentary business."

The data released by Facebook covers a seven week period from August 5 to September 23. It showed Victorian Liberal MP Jason Wood spent $17,227 on 71 ads, more than any other MP in that time. Mr Taylor spent the second biggest amount in that period. Mr Wood, the Assistant Minister for Multicultural Affairs, spent at least $3000 on ads inviting people to "like" his page.

Mr Wood's spokesman said social media costs "can be met from a member's office budget as long as the item is being boosted for the conduct of their own parliamentary business". 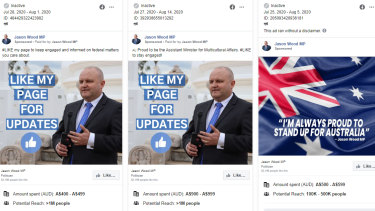 Federal MPs can spend up to $141,468.96 a year on office expenses, including the promotion of government policy on social media. They also get an extra $1 for every enrolled voter in their electorate, which is, on average, about 100,000 people.

In 2018, federal politicians spent about $1.8 million of their office entitlements on "e-materials", which are mostly social media ads, and in 2019 they spent $2.3 million.

Social media expenses are about one-tenth the cost of printing and posting newsletters or flyers to politicians constituents, which currently cost taxpayers more than $1.5 million dollars per month on average.

Peter Chen, a senior lecturer in politics at Sydney University, said paying to boost attention on Facebook may appear "a little less dignified, but that's the reality of [modern] communication".

Federal Labor Perth MP Patrick Gorman, who spent $8853 on Facebook ads in the seven weeks up to September 23, used at least $6700 buying ads asking people to "like" his Facebook page.

Mr Gorman said Labor's 2019 election campaign review found the party needed to take a "digital-first" approach and he was embracing that.

"Advertising on social media, where more and more Australians are accessing information is often the most cost-effective way to engage with constituents," Mr Gorman said. "The cost of distributing a flyer to my entire electorate through Australia Post is $12,000 alone. Direct mail increases that cost to $50,000." 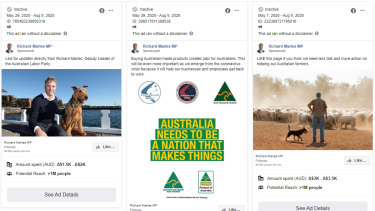 Deputy Labor leader Richard Marles has spent more than $5000 on ads asking people to “like” his Facebook page.Credit:Facebook ad library

Victorian Liberal MP Tim Wilson has promoted his new book on his official Facebook page and recently purchased ads to push it further across the network. But Mr Wilson said he did not charge taxpayers for those ads.

"Posts which promote the sale of The New Social Contract were deemed as a private benefit and therefore the approximate $400 in 'boosting' was paid from my own pocket," Mr Wilson said. 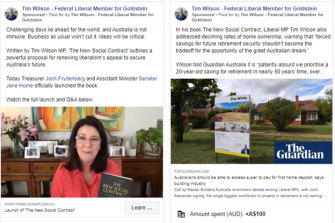 Victorian MP Tim Wilson used his Facebook page to launch his book and paid for ads promoting it. Credit:Facebook

"Other posts which promote discussion on the importance of homeownership, housing affordability, tax reform and job creation for young Australians – all central themes of The New Social Contract – are critical to my role as an MP [and] I will continue to proudly and aggressively promote them through all mediums and platforms," Mr Wilson said.

The Department of Finance said all MPs' office expenses must be for the "dominant purpose of conducting parliamentary business" and "must not be used for any commercial purpose".

Federal Greens MPs spent $15,000 in total on 66 Facebook ads between August 5 and September 23. Many of their ads oppose gas as a transition fuel to a lower emissions economy. Some of those ads were mistakenly taken out of the Facebook ad library by one of the company's bots.

A Greens spokesman said it was an automated deletion of their ads due to a mistake by Facebook bots misidentifying a "non-functional component" of the ad. The ads have been restored.

"Facebook plays a role in taking these (political) ads down that otherwise would fall to the electoral commission or more transparent bodies," Professor Bruns said. "By the time they take down an ad it may have already served its purpose."

Mining magnate and former MP Clive Palmer has spent more than $62,000 at Facebook ahead of the Queensland election via his personal page and the United Australia Party, the highest spend of all local political parties between August 5 and September 23.

for, pick, tab, Taxpayers, the, up
You may also like: