In moments of peril, many a mountaineer can thank a St Bernard dog for helping save their lives.

But it was Daisy, a 121lb (55kg) St Bernard, who needed saving after the distressed pooch collapsed while descending England’s highest peak. 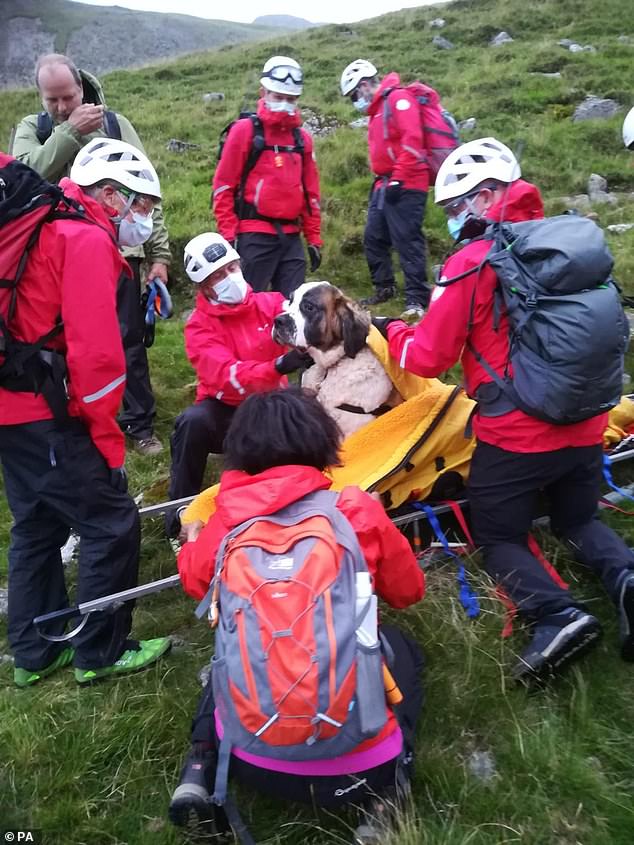 The team said the dog was displaying signs of pain in her rear legs and was refusing to move as she came down from the summit of the mountain with her owners on Friday evening.

A spokesman said: ‘Having team members with their own pampered pooches at home, and also our very own much-adored search dog Jess, we recognise the distress that both an animal can feel and also that of their owners. 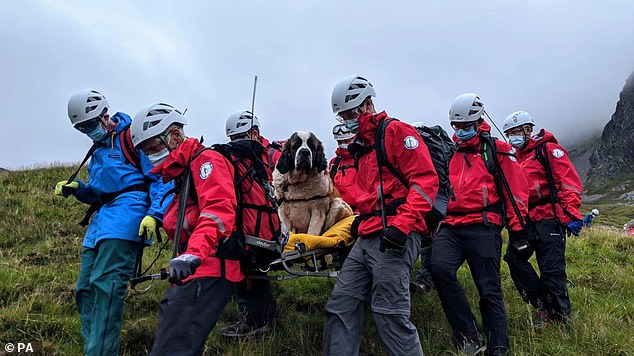 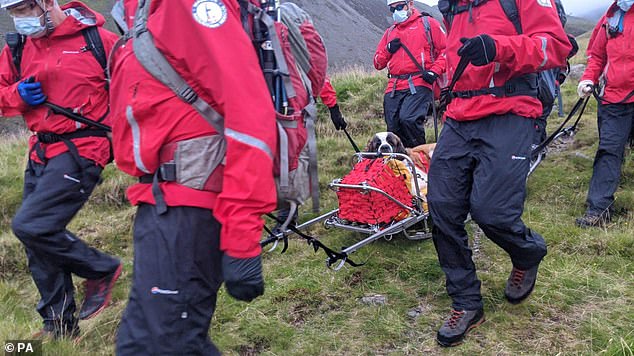 ‘When Cumbria Police contacted us, our members didn’t need to think twice about mobilising and deploying to help retrieve Daisy off England’s highest mountain.

What are St Bernards? 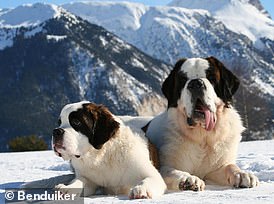 The St Bernard is a breed of very large working dog from the western Alps in Italy and Switzerland.

They were originally bred for rescue by the hospice of the Great St Bernard Pass on the Italian-Swiss border.

The hospice was built by and named after Italian monk Bernard of Menthon.

They have been typically depicted carrying a brandy barrel round their necks for anyone they rescue, but there is no evidence this actually happened.

The team said they sought advice from vets before beginning the rescue operation and were able to assess Daisy’s condition and administer pain relief, before lifting her off the mountain on a stretcher.

They said: ‘After a little persuasion and a bit of arranging the stretcher to become dog-friendly, and of course plenty more treats, the 55kg Daisy very quickly settled down with her chin resting on the head guard, having realised we were trying to help her.

‘From there on, apart from the odd little adjustment, the evacuation was found to be not that much different to a normal adult evacuation which is the bread and butter of our team and we have done hundreds of times before.’

St Bernard dogs were originally bred to help with rescues in the Alps in Italy and Switzerland.

They are named after the hospice built by Italian monk Bernard of Menthon, which is where they were first bred.

The team said Daisy was the ‘perfect casualty’ and is now recovering from her own rescue ordeal.

The spokesman said: ‘She apparently feels a bit guilty and slightly embarrassed about letting down the image of her cousins bouncing across the Alpine snows with barrels of brandy around their necks.’

The team thanked West Lakeland Veterinary Group and Galemire Veterinary Hospital for their advice and support during the rescue.

Donations can be made to the Wasdale Mountain Rescue Team at www.justgiving.com/wasdalemrt 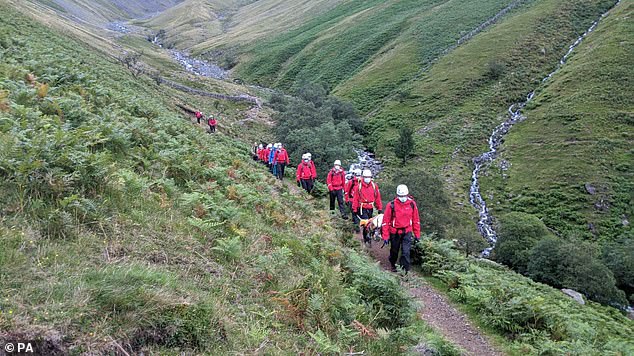 The rescuers make their way down Scafell Pike, England’s highest mountain, with Daisy

five, hours, rescuing, spend, team
You may also like: