A TEEN girls attempt to jump off a roof and use a trampoline to bounce into a swimming pool went horribly wrong.

Video shows the bikini clad girl taking her run up on the roof as a friend shouts out “hit it” to gee her up for the stunt. 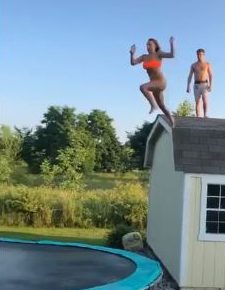 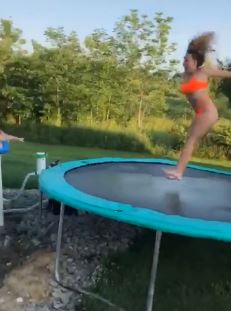 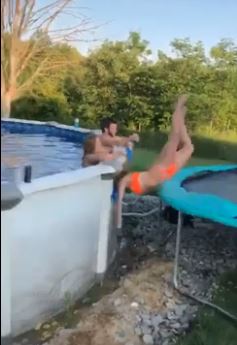 With music blasting out and her friends all watching in keen anticipation, she leaps off the roof and on to a trampoline set up in front of the pool

All seems to be going well as she lands feet first on the trampoline.

But it the stunt then starts to unravel and instead of a graceful glide across into the water, she slams face first into the side of the pool.

Her two friends take evasive from her flying feet as she then pivots to hit the ground face on, while others can her heard saying “oh my God”.

The girl lies on the ground in some pain but seemingly unhurt as another friend utters the prophetic words: “I told you.”

Her failed stunt follows in the footsteps of a foolhardy woman who also attempted to leap from the roof of a house into a swimming pool — only to smash into a patio shelter on the way down.

Video shows a man and a woman standing on the roof of a two-storey house before they take a running jump into the pool as partygoers below seem oblivious.

But while the man manages a graceful plunge into the water below, the woman stumbles near the edge.

Crucially she did not gather enough speed and as she reaches the point of no return, she seems to falter.

This means that instead of leaping off the roof she ends up crashing almost vertically down onto the shelter, where revellers are enjoying their Fourth of July drinks. 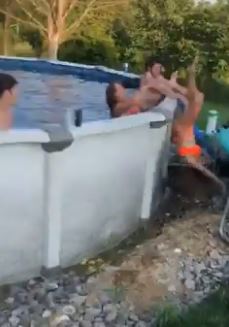 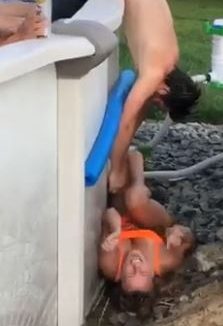