A teenager shocked his friend after somehow catching a fish with his bare hands when he unexpectedly slipped into a lake and became fully submerged in water.

Aidan Gruno was on a camping trip behind his friend Tristian Compton’s house in Alaska when the unexpected fishing took place.

The 19-year-old had an unpleasant surprise after he slipped into a drop in the lake and fell underwater, hilarious footage shows. 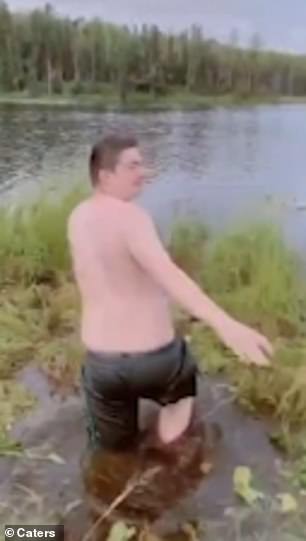 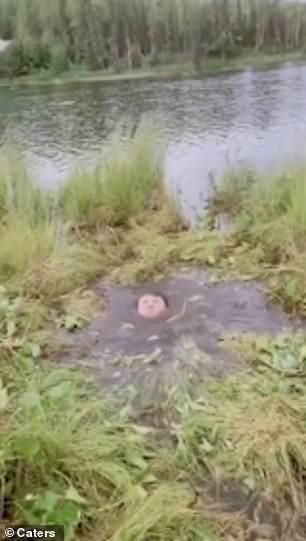 Aidan Gruno, 19, managed to catch a fish with his bare hands after he unexpectedly fell into a drop in a lake (above) when camping behind his friend’s house in Alaska

Tristian, 18, can be heard laughing in the video and he shouts ‘oh no’ as his friend disappears into the deep patch of water.

The teenager becomes fully submerged under the murky water after his clumsy moment, before he reappears gasping for breath.

But Aidan surprises his friend by shouting: ‘Dude, I found a f***ing fish!’

Still neck-deep underwater, Aidan pulls out a fish from the lake which he has caught with his bare hands during the accident. 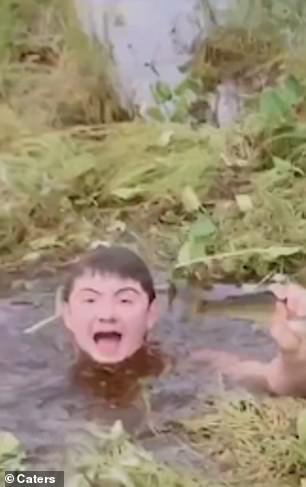 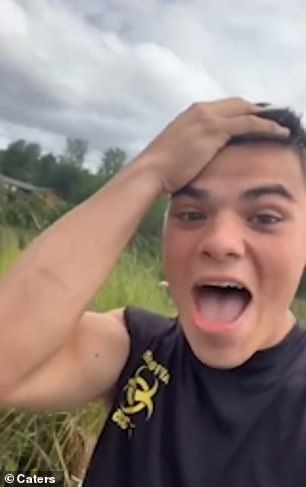 Aidan shocks his 18-year-old friend Tristian (right) when he reappears from the murky water brandishing a fish which he somehow caught with his bare hands, a hilarious video shows

Tristian starts hysterically laughing as he sees his friend brandish the fish, shouting ‘no way’ as he turns the camera around to show his surprise.

Aidan looks completely stunned by his bizarre discovery and told his friend that he has never come close to doing anything similar before.

Tristian said: ‘I had no idea how Aidan managed to do this.

‘He said he just felt it and grabbed it!

‘He’s never caught a fish with his bare hands before.’

catches, fish, His, Teenager, With
You may also like: