Teenager humiliated by bullies who tricked her into sending nude photo

My naked photo torment: Teenager who was tricked into sending nude picture online reveals how bullies humiliated her at school 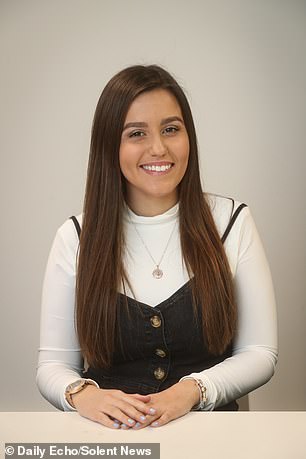 A brave teenager today told how she was humiliated when a girl posing as a boy tricked her into sharing a naked photo on social media – which was then sent round her entire school.

Megan Hinton was just 14-years-old when the bully at her school shared the nude photo on social media and then had to endure years of fellow pupils ‘making sick noises’ when they passed her in the corridor.

Megan had been relentlessly pressured into sending the picture during a series of messages from someone she thought was a boy in the year above her at her new school, but turned out to be a girl in her own year.

To her horror, when she finally relented, she was immediately tormented by a Snapchat reply from the girl, who sent a photo of herself grinning with the message ‘ha ha I’ve got you’.

The next day, Megan, from Marchwood, Hants, was mocked by classmates at Hounsdown School in Totton, Hants, and the photo quickly spread among its 1,215 pupils.

It was circulated on a host of social media platforms including WhatsApp and Facebook.

Speaking out today, the pretty 19 year old who is now studying multimedia journalism at Bournemouth University, said: ‘I had just moved school – I’d been really badly bullied at my last school which is why I’d moved.

‘I was making a lot of new friends, adding a lot of people on different types of social media, and I believed I was talking to a boy in the year above me, when actually it was a girl in my year who had been using his accounts with his permission.

‘They asked me to send a photo, and initially I said no, but the pressure just kept on building up and up.’

Megan had been chatting to the ‘boy for two weeks, and was receiving messages every hour asking her to send a nude photograph of herself.

She said that looking around her, she thought all of her friends were doing the same.

She said: ‘It was all so normalised, so I thought it was okay. 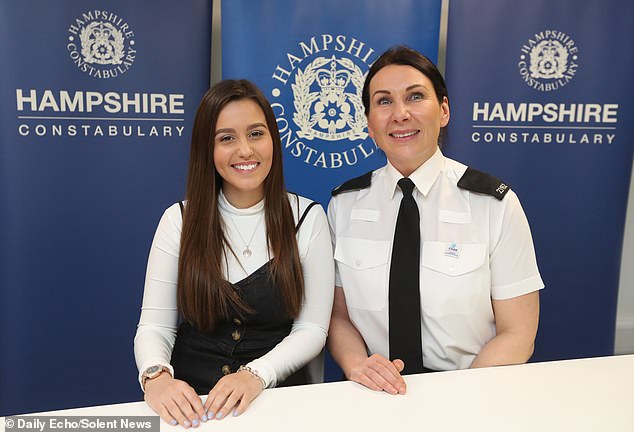 Now, Megan is working with Hampshire police to share her story and warn students of the risks of social media

‘He was constantly telling me that if I didn’t do it he would tell everyone I was frigid.

‘Everyone would talk about sending nudes, and when I’d go into school I’d hear other girls talking about how they send them to their boyfriends.

‘I sent the photo and then realised that I wasn’t talking to who I thought I was talking to.

‘After about an hour I received a Snapchat.

‘When I opened that Snapchat it was a picture of the girl saying ‘ha ha I’ve got you’.

‘My stomach just dropped, I felt sick, panicked and didn’t know what to do.

‘I turned my phone off, hoping she wouldn’t be as nasty as now she’s played her trick she’ll leave it, she’ll put it to bed and won’t tell anyone.

‘But when I went to school everyone had it on their phones, everybody had seen it.

‘People who were two years below me who I don’t really know were tormenting me with it, crowding around me, laughing, mocking me.

‘People distanced themselves from me.

‘I was made sick noises at continuously in the hallways for the rest of my time at school, which made me feel disgusting and worthless.’

Megan eventually told her class tutor at Hounsdown School, which was rated ‘outstanding’ in its most recent Ofsted inspection in 2017, and police were informed.

She added: ‘I felt it was my fault and I didn’t have the right to feel upset.

‘Everything else goes back to normal. It’s the victim who lives with the consequences.’

Now, Megan is working with Hampshire police to share her story and warn students of the risks of social media.

PC Maria Carrick, of Hampshire police, said: ‘We hope that hearing about Megan’s experience and how she overcame this difficult time will give strength and support to young people who experience bullying and pressure for nude pictures or naked selfies.

‘We don’t seek to criminalise young people, we want them to understand we can really help.

‘We encourage parents and teachers not to be afraid to talk to children about their activities on social media and explain the importance of privacy, and thinking before uploading content online, to prevent them from becoming both the victims and perpetrators.’