The retailer said it had started putting the recycling points into 171 stores in the south-west of England and Wales with plans to roll out to all large branches nationwide, following a successful trial in 10 shops.

Once collected, the soft plastic packaging brought back by customers is sent for recycling where it is washed, sorted and processed before being turned into new packaging for food, household and beauty products.

The supermarket said the move would provide the UK’s biggest network of recycling points for soft plastic, which is not commonly recycled by councils in kerbside collections and often ends up in the bin. 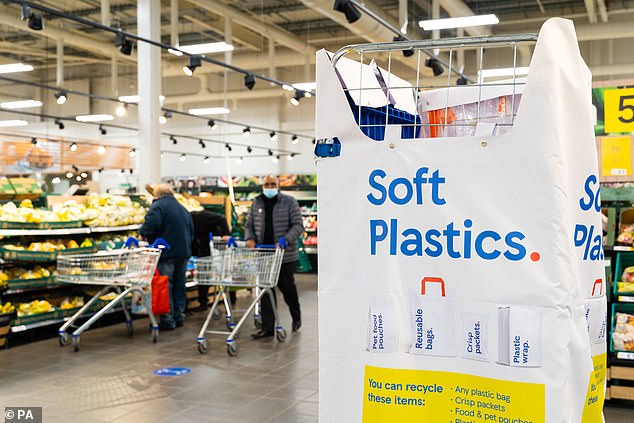 One of Tesco’s soft plastic recycling points, which is being rolled out so customers can recycle old packaging such as bread bags, pet food pouches and crisp packets 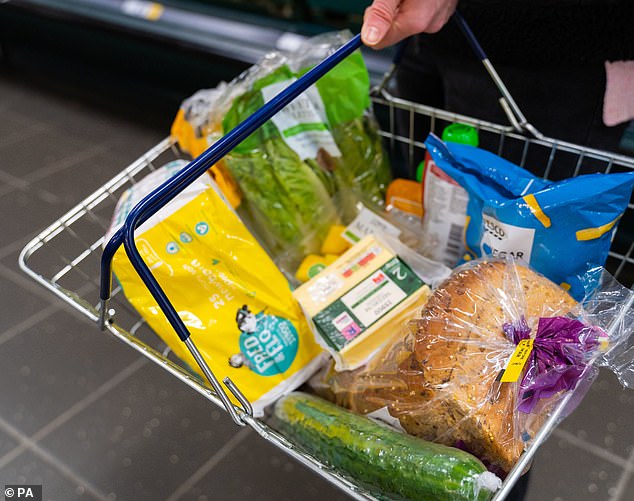 A shopping basket showing products wrapped in plastic. The retailer said it had started putting the recycling points into 171 stores in the south-west of England and Wales

Material already collected has been used to produce food grade packaging for a selection of Tesco cheeses.

It expects to collect and recycle 1,000 tonnes of plastic a year through the scheme, with consumers allowed to return all their soft plastic, regardless of where they bought it.

Tesco’s director of quality, Sarah Bradbury, said: ‘It is an absolute priority to remove and reduce as much plastic as possible and ensure everything we use is recycled and kept out of the environment. 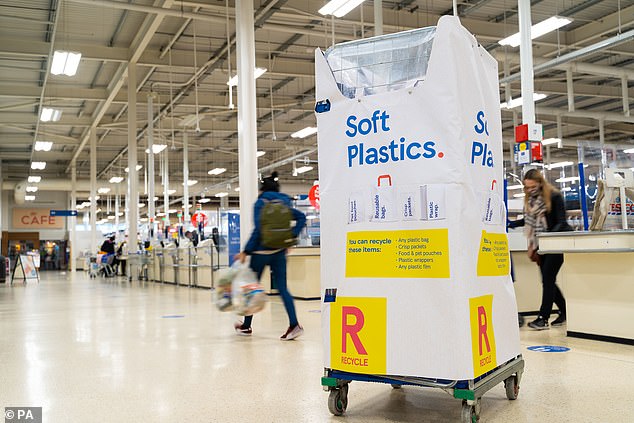 Tesco expects to collect and recycle 1,000 tonnes of plastic a year through the scheme, with consumers allowed to return all their soft plastic, regardless of where they bought it 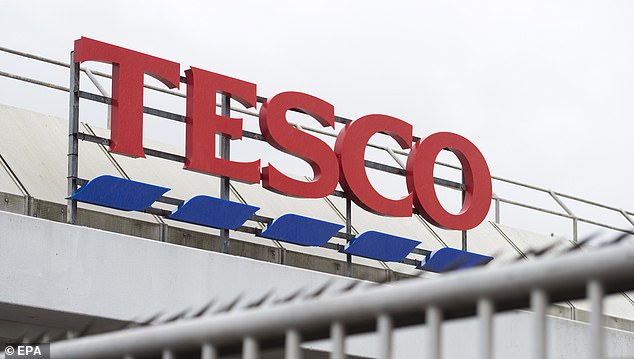 The supermarket said the move would provide the UK’s biggest network of recycling points for soft plastic, which is not commonly recycled by councils in kerbside collections (file photo)

What are soft plastics and why do they often end up in the bin?

Soft plastic can be scrunched into a ball, unlike hard plastic which maintains its shape.

It is commonly used in packaging, including carrier bags, rubbish bags, crisp packets and food pouches.

Some soft plastic, such as clear fruit and vegetable bags, can get tangled in recycling machinery with plastic processors not always accepting them.

Local councils operate different recycling schemes in Britain, leading to confusion over what can be recycled in different regions.

This varied approach results in tens of millions of tons of plastic, particularly soft plastics and black plastic trays, ending up buried in landfill, burned for energy or exported overseas.

‘Where plastic serves an important purpose such as reducing food waste, these new recycling points make sure that every piece can be easily recycled.

‘Trials have shown they are popular with customers, so we believe rolling them out at scale will have a real impact.’

The move has been welcomed by environmental charity WWF, whose sustainable materials specialist Paula Chin said: ‘Plastic pollution is one of the most visible symptoms of the environmental crisis and is devastating our natural world.

‘Businesses, governments and households have all got an important part to play in tackling the issue, so it’s encouraging to see Tesco extending their successful soft plastics collection trial across more of their stores, giving their customers even more opportunity to recycle these valuable materials.’

The ‘Everyday Plastic Survey’ saw some 483 people across the UK record the extent of their household’s plastic waste for a week during lockdown.

In total, the 179 homes accumulated nearly 23,000 bits of plastic rubbish — much of which would be destined for landfill or incineration, rather than recycling.

The lockdown iteration of the survey took place over the last three months, and saw 483 participants from 179 households collect a whopping 22,891 pieces of waste.

Almost two-thirds of this refuse — 65 per cent — was soft, thin and filmy plastic, which is rarely recycled in the UK.

HOW MUCH RECYCLING ENDS UP IN LANDFILL?

Every day, millions of us drop a plastic bottle or cardboard container into the recycling bin – and we feel we’re doing our bit for the environment.

But what we may not realise is that most plastic never gets recycled at all, often ending up in landfill or incineration depots instead.

Of 30 billion plastic bottles used by UK households each year, only 57 per cent are currently recycled, with half going to landfill, half go to waste.

Most plastic never gets recycled at all, often ending up in landfill or incineration depots instead. Around 700,000 plastic bottles a day end up as litter

Shockingly, less than 0.4 per cent of these are recycled.

Most cups are made from cardboard with a thin layer of plastic.

This has previously posed issues with recycling but can now be removed.

Five specialist recycling plants in the UK have the capacity to recycle all the cups used on our high-streets.

Ensuring the paper cups end up in these plants and are not discarded incorrectly is one of the biggest issues facing the recycling of the paper vessels.