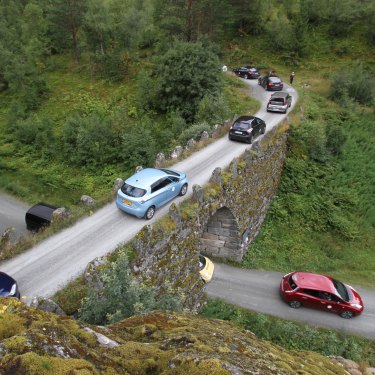 Norway has been a quiet achiever on electric vehicles, selling the most new cars per capita of anywhere in the world. Credit: Norwegian Electric Vehicle Association.

Norway’s electric car revolution began with the most unlikely of champions.

Long before the country became the world-leader in battery vehicles, environmentalist Frederic Hauge had a chance encounter with Morten Harket – the lead singer for A-ha, the Norwegian pop group behind the 1985 hit Take On Me. The pair hit it off and took to the road in a converted Fiat Panda, hurtling through toll stations without paying.

Fines came thick and fast but they refused to pay. The dumpy electric car was regularly impounded and put to auction for 200 Norwegian kroner – less than the cost of a penalty notice. With zero demand for a car with a range of just 45 kilometres, Hague and Harket were the only buyers to raise their paddle each time bidding commenced. 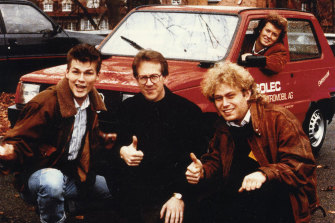 The pair’s act of civil disobedience-cum-green activism generated a blaze of publicity and is credited with sparking a series of incentives which fuelled the battery boom. Toll charges were removed for electric vehicles in 1997, parking made free in 1999 and access to bus lanes granted in 2003.

“I get happy in the morning when I drive and see all the electric cars,” Hauge says in an interview. “It shows that you can make a difference and it shows that offering carrots can really work.”

The two most generous measures – the removal of a 25 per cent Value Added Tax and elimination of the hefty one-off Registration Tax – have had the biggest impact in turning electric vehicles from the plaything of rich environmentalists to a budget-friendly no-brainer for the mainstream.

Norway has had various incentives in place for nearly three decades but the surge really only started less than 10 years ago. In 2011, diesel cars accounted for 75 per cent of new sales but in September made up just 2.3 per cent.

Transport emissions account for a quarter of the world’s annual greenhouse gas pollution, with a transition towards low and zero-emissions cars viewed as critical for the leading economies to meet their Paris commitments.

In September, an extraordinary 77.5 per cent of new registrations were electric vehicles, rising to 91.5 per cent once rechargeable and plug-in hybrids are included. The country is well on track to meet its goal of no new internal combustion engine sales by 2025 – five years ahead of the timeline set by other ambitious countries like the United Kingdom.

Norway’s nearest rival is Iceland, where a little over half of all sales last year were electric models. The next is Sweden on 32 per cent, the Netherlands on 25 per cent and Finland at 18 per cent. Australia languishes on just 1 per cent.

Norway’s quiet achiever status went global earlier this year when auto giant General Motors hired Hollywood actor Will Ferrell to front a series of television commercials challenging Americans to seize the number one spot from the Scandinavian nation. One 90-second spot aired in the middle of the Super Bowl – the holy grail of US advertising.

“So if you have any doubt over the direction this thing is going, look no further. This is happening. This is coming. It’s just a question of how fast and to me it seems this is going to happen much, much faster than people think.”

Rotevatn, a political centrist who will leave office once a new centre-left coalition government is formed following recent elections, says the happy confluence of better vehicle performance and competitive sticker prices is the simple truth behind the surging uptake.

“Money talks and I don’t think you can reasonably expect people to sacrifice their family’s economy to save the environment. People do want to make an effort for the environment but your wallet matters and most aren’t willing to spend 10,000, 20,000 or 30,000 euros extra on buying a car – that’s the simple truth. 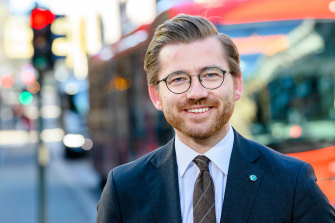 “If an environmentalist tells me they’ve just bought an electric car, I’m not impressed by that. But when people – some who don’t even believe in climate change – buy electric, that’s when I pop the champagne corks. And that’s the only way you’re ever going to stop global warming: to make it profitable for consumers.”

Rotevatn insists the rest of the world can learn from the revolution unfolding here but Norway has advantages others don’t, including a $US1.2 trillion ($1.6 trillion) sovereign wealth fund bankrolled by revenue from the drilling of the country’s vast – and dirty – oil and gas resources. The fund means the estimated $US2.3 billion annual revenue lost by exempting electric vehicles from taxes is much easier to absorb. Nearly all power generation also comes from hydropower.

The most popular models in September were the Tesla Model Y and Tesla Model 3, which accounted for 40 per cent of total sales. The Tesla Model Y has a starting price of 550,000 kroner, or $87,000. “Tesla came and it was kind of a game changer,” says Unni Berge of the Norwegian Electric Vehicle Association.

Keen to get a slice of the action, Chinese carmaker large Hongqi is about to launch a luxury SUV in the Norwegian market and has set up a stall at Oslo Airport to show off the vehicle and take sales enquiries.

Berge agrees electric cars have not been a political football here in the way they became during Australia’s last federal election. “It has been kind of a positive thing that Norway doesn’t have any domestic car making industry. In Germany, there has been a lot of resistance from the car industry, which has been trying to promote internal combustion cars for as long as possible.”

Minister Rotevatn says of the muted politics: “The simple reason is that its popular – voters like these cars. Both politicians and voters see that this is something that actually does work.

“I know a lot of people who’ve bought their first electric vehicle quite recently – my dad is one of them. And I am yet to meet a single person who regrets that decision.”

Home to 5.4 million people, Norway is a huge country (it has more coastline than Germany, France, Sweden, Italy, Greece combined) with vast distances between its major cities. But even in Tromso, a northern city dubbed the “Gateway to the Arctic”, over half of all sales are electric as buyers move on from so-called “range anxiety”.

“Even further north, in the county of Finnmark, something amazing is happening,” Berge says. “For quite a long time, the percentage of EV sales there was stuck at around 8 or 9 per cent and then a fast charging network was built and the number just exploded, because people felt confident they could leave the garage and have no issues.”

Norway’s mission to rid itself of dirty engines is most apparent in the capital Oslo. In the city centre, cars are largely banned from parking on the street and the few vehicles that do venture here make so little noise it’s sometimes hard to know they have crept up behind you.

On the chicken or egg argument of charging stations, Øyvind Solberg Thorsen, the director of the Norwegian Road Federation, says charging stations should keep up with demand but don’t necessarily need to pre-empt it. The biggest problem is that up to 10 providers are in the charging market, and drivers need to download different apps to use the stations.

“The rest of the world probably owes Norway a favour, because we have been at the forefront and have made mistakes along the way,” Thorsen says. “One is that we have not had enough focus on establishing a national charging network.”

Another looming challenge is apartment dwellers who buy electric. Most sales so far have been from Norwegians who own standalone houses and can easily charge in their garage.

None of this seems to be deal-breakers, though, as uptake continues to climb. The boom is filtering through other transport sectors, too. School buses, postal trucks and delivery vans are going electric, as is Oslo’s ferry fleet. The hulking Bastø Electric, which can carry up to 200 cars and 600 passengers across the Oslo Fjord, is powered by batteries and rapidly charges itself with a cable as thick as a human body when it docks. “One of the things we have managed to do is show the scope of what batteries can do,” Hauge boasts.

About 15 per cent of all cars on the road in Norway are now electric. Norwegians hold on to their cars for a long time and when they do finally buy, 80 per cent lean towards second-hard vehicles. This means it might take two decades for petrol and diesel cars to vanish from the roads. And OPEC predicts internal combustion engines will still make up 76 per cent of the global vehicle fleet by 2045.

For now, the growing question in Norway is how much longer the incentives which drove the boom can last. The incoming coalition government is considering a plan to reintroduce VAT on electric vehicle sales over 600,000 kroner but experts like Thorsen urge caution. “The revenue problem is not sustainable – we all know that and know something has to be done. But [the government] should keep a steady course for the time being.” 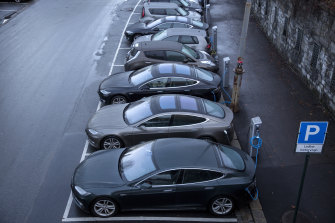 Electric vehicles charge at a station in Oslo.Credit:Bloomberg

Berger from the Norwegian Electric Vehicle Association says politicians should go hunting for more money in the fossil fuel industry before sizing up electric vehicle buyers.

“We need to avoid allowing fossil fuel vehicles to become financially competitive again. They are the past. We have to think of the future.”

car, electric, pu, Revolution, the
You may also like: