Since 1889, Le Grand K, a sleek cylinder of platinum-iridium metal, has ruled from its underground vault in Paris. An absolute monarch, it was the very definition of 1 kilogram of mass. Scientists from around the world made pilgrimages to it, bringing along their national kilogram standards to weigh in comparison.

"The mother ship is never wrong," said Robert Vocke, a chemist at the National Institute of Standards and Technology in Gaithersburg, Maryland.

No longer. On Friday, in a small conference centre just steps from the Palace of Versailles, several dozen nations voted to overthrow Le Grand K and to redefine the kilogram and three other standard units of measure: the ampere, for electrical current; the kelvin, for temperature; and the mole, which describes the amount of a chemical substance. The vote fulfils an 18th-century dream. Henceforth, all seven units in the International System of Units, otherwise known as the SI, will no longer be defined by material objects and instead will be defined only by abstract constants of nature.

"This arc of history started before the French Revolution and now, I think we've finished the journey," said Stephan Schlamminger, a NIST physicist. The "democratisation of the units," he said, is now complete. 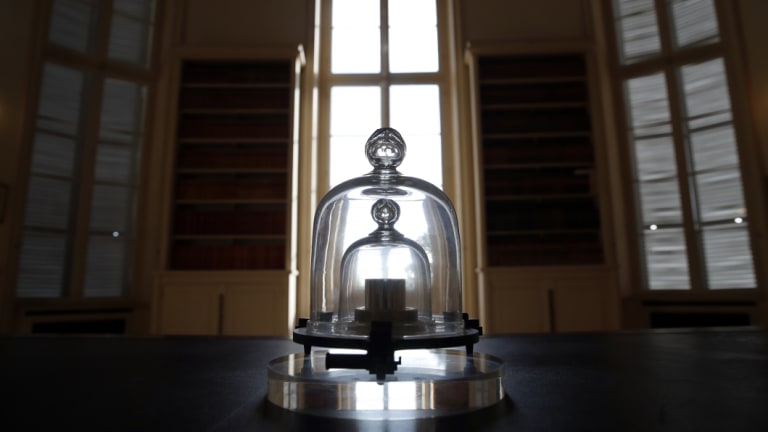 The SI originated at the end of the 18th century with just the metre and the kilogram. The idea was to standardise the basic units of trade and scientific measurement. After all, for 1 kilogram of gold coins to hold universal value, everyone has to agree on the exact definition of 1 kilogram.

By 1875, 17 nations had signed the Treaty of the Metre in Paris, which set international standards for the metre and the kilogram. The metre was defined as the distance between two scratches on a hallowed bar of platinum-iridium metal. The standard kilogram was Le Grand K. Both artefacts would be stored under lock and key at the International Bureau of Weights and Measures, with copies distributed to various countries.

"People called it 'for all times, for all people,'" said Schlamminger.

But it wasn't. A physical object could be scratched, chipped or even destroyed. Scientists began to dream of standard units of measurement that would remain forever constant – standards with definitions built from the fabric of the universe.

The metre achieved this stature in 1983, when it was redefined in terms of the universally constant speed of light. Scientists had been estimating light's speed for centuries, but not until the 1970s, following experiments involving lasers in a vacuum, did they settle on a number: exactly 299,792,458 metres per second.

The metre was defined accordingly, as the distance travelled by a beam of light in exactly 1/299,792,458th of a second. (The second, another fundamental unit, has been defined since 1967 as the amount of time it takes an atom of cesium-133 to vibrate 9,192,631,770 times.) In effect, a metre no longer needed to be measured; now it could be conjured on demand – "realised", in the parlance of metrology.

In 1990, metrologists discovered that Le Grand K had mysteriously become lighter than its six official copies by some 50 micrograms. The kilogram standard was in trouble.

The mission to redefine it began.

Over the years, two possibilities presented themselves: to measure the exact mass of 1 kilogram in terms of the electromagnetic force required to lift it, or in terms of the specific number of atoms in its mass. But like the metre before 1983, neither of those definitions linked the kilogram to fundamental constants.

That link appeared in the form of Planck's constant, which converts the macroscopic wavelength of light to the energy of individual photons of light. But only proper experiments could provide agreed-upon numbers for those constants and make those units forever real.

"If you can't do that, your definition is useless," Ian Robinson, who worked closely with Kibble, said.

One method of redefining the kilogram sprang from an effort to the revise the ampere, the standard measure of electrical current. In 1975, Bryan Kibble, a physicist at the National Physical Laboratory (NPL) in London, was handed the unenviable job of improving an instrument called the ampere balance. The device could measure electrical current in terms of weight, but only poorly.

"It was a devil to work with," said Anne Kibble, a retired NPL scientist and the widow of Kibble, who died in 2016.

Kibble dreamed up a different apparatus, renamed the Kibble balance after his death, that eliminated many of the sources of inaccuracy and error that plagued the original.

"All of the difficult things just melt away," says Robinson. Together, Kibble and Robinson built the world's first Kibble balance, named the NPL Mark I, in the 1970s.

Just as with the experiments that measured the speed of light, once Planck's constant was measured with extreme accuracy and agreed upon, the role of the Kibble balance could be reversed, to define 1 kilogram in electromagnetic terms.

Around the same time, 600 miles to the east, Horst Bettin, a physicist at the Physikalisch-Technische Bundesanstalt in Germany, was working on realising the kilogram in a very different way, by counting atoms.

Another standard unit used by scientists, the mole, roughly describes how many particles are contained in a given amount of mass. Bettin figured that if he could create an exceptionally perfect silicon crystal — ultrapure, spherical and with a very orderly atomic structure — that weighed exactly 1 kilogram, and counted the atoms with the unit moles, he could essentially define 1 kilogram as a specific number of silicon atoms.

"That was our idea," Bettin said. "It would be far more simple than with the Planck constant."

In effect, Bettin had devised an experiment that would precisely measure a constant known as Avogadro's number, which dictated that 1 mole of a substance contains 6.022140857 × 10^23 particles such as electrons, atoms, ions, or molecules. Avogadro's number had been estimated but, like the speed of light, never precisely measured and agreed upon. (As of today, Avogadro's constant has been redefined as the value 6.02214076 × 10^23.)

An heir to the throne

But the kilogram could not be redefined until the scientists had derived the same answer for the Planck and Avogadro constants within seven decimal places.

"What we call 'measurement' is an estimate," Schlamminger said. "Basically you can estimate what the true value is. The true value, only the universe knows."

That accomplishment took 20 years. In 2008, the NPL shut down the Kibble balance effort and sold the instrument to Canada's National Research Council (NRC). By 2014, the Kibble balances from NIST and NRC produced numbers for the Planck and Avogadro constants that agreed with the results from Bettin's work.

"It's really a miracle because they are completely different," said Bettin, referring to the two constants. "They have nothing in common."

Anne Kibble said of her husband: "I think he would have been so very, very happy that it has all come to fruition, I'm absolutely convinced of that. It dominated his life."

Friday's vote cements the values of the Planck and Avogadro constants, and releases the kilogram from its earthly form. The four new definitions — for the kilogram, ampere, kelvin and mole — will be officially take effect after World Metrology Day, next May 20. The transition will only be felt at the frontiers of science and technology; the everyday world will not notice.

"They mustn't notice, because if they do, we haven't done our jobs right," said Robinson, of the NPL.

Le Grand K will join its counterpart, the metre bar, in the archives of metrology. Bettin will retire next year. Schlamminger has set his sights on big G, the universal gravitational constant.

"If we love to measure things," he said. "There's tons of stuff out there that can be measured."

Dead, is, Kilogram, Liv, long, the
You may also like: