Two weeks shy of two years ago, Governor Linda Dessau signed the documents that created the Royal Commission into the Management of Police Informants that will forever be known as the Gobbo inquiry.

Yesterday, the very impressive, four-volume, 1000-page final report, (longer than the Old Testament) was tabled in State Parliament. It is thorough and comprehensive (examining more than 150,000 documents ) but certainly no thriller. 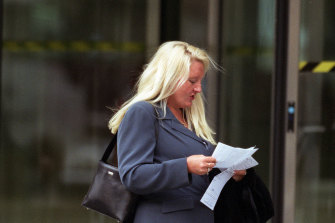 Nicola Gobbo, when she was still a familiar sight around the Melbourne courts precinct.Credit:Vince Caligiuri

Because from the day it was commissioned, December 13, 2018, the conclusion was fixed. The cops should never have used barrister and loose cannon Nicola Gobbo as an informer no matter how much she wanted to be a latter day Mata Hari.

We know that because even before the royal commission was appointed, the High Court found that the police use of Gobbo struck at the heart of the justice system, was “reprehensible” conduct and an “atrocious” breach of sworn duty.

These words were echoed in the royal commission's final report where time and again, high-ranking police were found to have breached their duty and to have brought the justice system into disrepute with more than 1000 cases possibly affected. 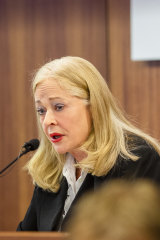 Whether by accident or design, the royal commission guidelines became a legal straitjacket. They were designed to discover how many cases could be affected by Gobbo’s actions, how and why police used the barrister who long ago lost her professional compass, and to examine the general use of informers in the criminal justice system.

And to that end, Commissioner Margaret McMurdo has done her job. The trouble is not that the royal commission went too far, it is that it did not go far enough.

What we don’t know is: were there other lawyers, formally or informally, snitching? Were there others in the criminal justice system who knew or suspected Gobbo was a double agent? Were there lawyers who conspired with their clients to pervert the course of justice by disposing of evidence?

The royal commission found that about 100 police knew Gobbo was an informer. We may never know if anyone else in the justice system knew of this little secret. One reason is because they weren’t asked.

One of Gobbo’s alleged reasons for informing was to expose a small group of lawyers she claimed were poisoning the system. The royal commission chose to suppress their names. No such protection was offered for a host of police grilled in the inquiry.

Claims made by a detective that a still-practising lawyer laundered $100,000 for drug dealer Tony Mokbel in a Queensland casino hit the bottom of the boat like a dead flathead.

Imagine if the claim was that a still-working detective laundered money for a drug boss (and make no mistake, that was Mr Mokbel’s profession before he retired to become a prison inmate). Do you think the response would be, “nothing to see here”?

The legal profession, quite rightly, is indignant at the use of Gobbo as an informer. But senior members of the Bar and the Bench have shown a remarkable lack of soul-searching about how it happened.

How did Gobbo become a barrister when as a student she was implicated in drug trafficking? Why was there no formal inquiry when she was known to have non-professional relationships with gangsters?

Let’s not forget that before she became an informer (for the third and final time), she was a suspect as an accessory to murder police informer Terence Hodson, killed with his wife, Christine, in 2004.

Before she sought some sort of protection by changing sides from the crooks to the cops, she was not just a barrister partying with the wrong people. She was accused of being an organised crime facilitator.

Why was she allowed to continue to practise when she was clearly no longer (and probably never was) a fit and proper person? Cops may have exploited her but her profession protected her and we in the media pumped up her voracious ego, dubbing her the “Million Dollar Legal Eagle” rather than seeing she was a damaged person desperate to remain relevant.

If she had wanted to be a cop, she wouldn’t have got into the Police Academy, and if she had, she would have been sacked for inappropriate associations.

It is welcome that, while it was not the thrust of the inquiry, the royal commission has made a series of recommendations to make it more difficult for shonks to practise law, let clients have a better understanding of how their lawyers should behave and most importantly, making it mandatory for lawyers to report other lawyers they suspect of misconduct.

If there is any good to come out of this mess, it is for police to take stock of how they use informers and for that secret club to have some form of external scrutiny.

At least some police wanted Gobbo to swim between the flags, to inform on her crooked pals she knew socially without using professional privileged material. The trouble was she didn't seem to know the difference and became impossible to control.

It was the same when police used drug dealer and killer Carl Williams (killed in 2010) as an informer. So desperate were the investigators to make a breakthrough in the Hodson murders that Williams was able to make ridiculous demands in exchange for questionable information.

Police need to know that no matter how much they want to solve a crime, sometimes the cost is too great and they need to walk away. Even Bradman couldn't average 100.

For years now, police have been relying on bugs, listening devices and CCTV to catch serious crooks. As criminals are increasingly using methods to thwart police technology, detectives will need to cultivate a new generation of informers and never again allow the human sources to run the show.

There will be a new set of rules. This time, everyone needs to play by them.

bar, elephant, in, Legal, the
You may also like: