A driver has unknowingly run over a crocodile at a river crossing known for having the huge reptiles lurking beneath the surface.

The footage, captured at Cahills Crossing in Kakadu National Park, in the Northern Territory, showed the four-wheel drive bravely driving through the water.

Onlookers filmed the crossing in the hopes of catching a glimpse of one of the crocodiles, with previous visitors to the site spotting up to 20 at a time. 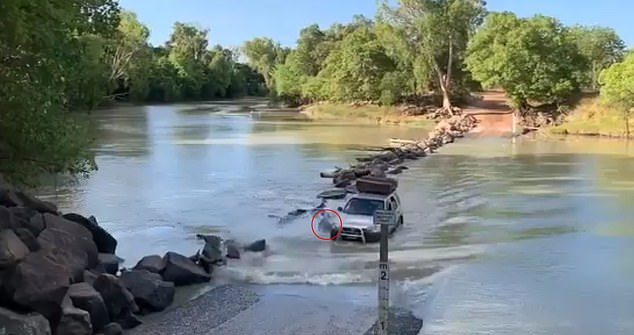 The footage, captured at Cahills Crossing, Kakadu National Park in the Northern Territory, showed a four-wheel drive driving through the water

The driver, seen in footage supplied to NT News, slowly drove through the water as they made their way to the other side.

Water quickly enveloped the front of the vehicle as it reached halfway up the doors.

Suddenly the car started to shake as though it had run over something.

A crocodiles tail thrashed in the water as it swam under the car after lurking beneath the surface.

‘You’ve just run over a crocodile,’ the woman can be heard to say.

The crocodile appeared to swim away unharmed from the incident. 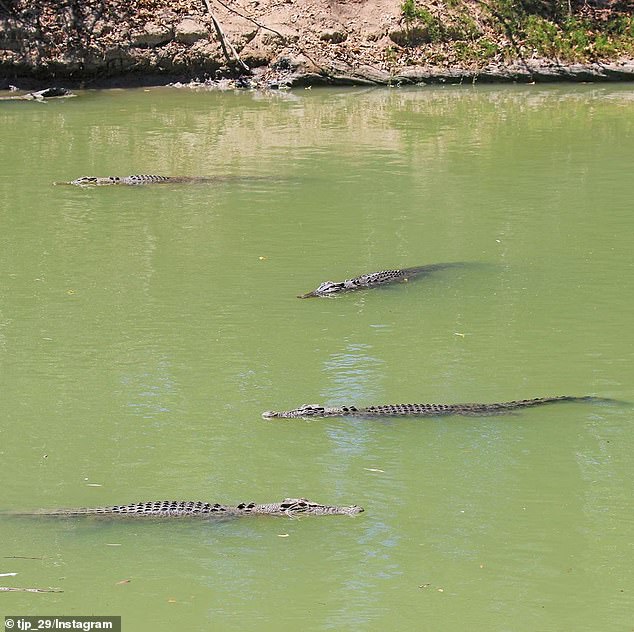 Cahills Crossing is known to be a dangerous area, with a 40-year-old man taken and killed at the site in 1987

Last month, Rachelle Wastle and her husband Peter were driving through the crossing when they were blocked by a dozen crocodiles.

Terrifying video footage shows the couple’s car submerged into water as they attempted to cross to the other side of the river.

The most famous death at the area was of a 40-year-old man, Kerry McLoughlin who was tragically taken and decapitated by a crocodile in 1987.

The infamous Cahills Crossing is only a few metres wide, but it’s one of Australia’s most dangerous bodies of water.

Along with varying tides, the water flow is strong enough to overturn vehicles, and it serves as a feeding ground for saltwater crocodiles.

Dozens of divers try to venture across the submerged crossing, but end up being washed in to croc-infested waters.

Many have lost their lives, including fisherman, children, photographers, and backpackers.

Crocodile expert Grahame Webb said for every crocodile you can see, there are 10 you can’t.

The most famous fatality at the Crossing was in 1897 when 40-year-old Kerry McLoughlin was decapitated by a crocodile on a fishing trip.

Rangers counted 120 crocodiles in the six-kilometre stretch around Cahills Crossing.

There have been five fatalities in the area so far.

Cr, driver, moment, over, runs, the
You may also like: