Hats off to a novel fixture for a sunny day at Sydney Cricket Ground – the NSW Police Force Academy passing out ceremony.

And, unfortunately, for the uniformed throng on the pitch in challenging mid-morning heat, passing out was exactly what some dozen or so of the new recruits did. 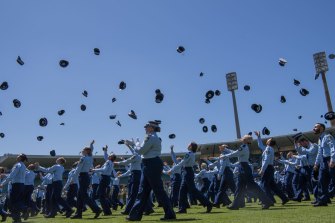 The Classes of 2020 Attestation Parade was held at the SCG instead of at the Goulburn Police Academy where only restricted ceremonies had been held.

On Friday at the SCG, this was a chance for family and friends to witness their graduation.

The recruits got an idea of what they were letting themselves in for as two large screens relayed images of the year that was and the role played by police encountering bushfires, floods and a pandemic. 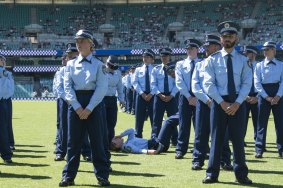 A big turn out of dignitaries sat without shade to witness the ceremony and Premier Gladys Berejiklian and Police Minister David Elliott walked along the columns inspecting the probationary constables. Prime Minister Scott Morrison also attended with the Governor of NSW Margaret Beazley and Health Minister Brad Hazzard.

Commissioner of Police Michael Fuller, addressing the parade, spoke of the challenges of COVID-19 that had closed universities. "The Goulburn Police Academy couldn't close," he said. "We didn't have that luxury because if it did close we would have 1000 less police on our streets today keeping the people of NSW safe."

He added: "My challenge for you is when you throw your hats in the air and the pride you have for policing and protecting the community of NSW, [is that] you never lose that."

Mr Morrison addressing the recruits told of his personal interest in the proceedings – speaking of his father John, who was a former NSW police officer. 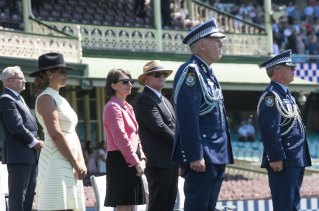 "My father stood there decades ago," he said. "He would be very proud to look upon you today. He was passionate about community policy as commissioners past and present know. You have joined the gold standard of police forces not just here in Australia but all around the world. I know your families will be bursting with pride as I burst with pride at my father's service."

Of the 1000 recruits five per cent speak a second language and 12 per cent were born overseas. Their countries of origin include Lebanon, the Cook Islands, Sudan and Turkey.

Commissioner Fuller, speaking after the ceremony said it wasn't just about police but about other services also taking part in the ceremony. "It was about the emergency services, anyone who has played a role this year, our nurses, and I have to say I almost got a bit emotional watching the emergency services walk past knowing what they have achieved this year for the people of NSW. When they threw their hats in the air I thought "What a day."

He also revealed a personal involvement. "My eldest daughter Brittany made a decision about 18 months ago that she wanted to follow me into policing, the first of my four children to make that decision, and I was proud, I couldn't be prouder."

Mr Elliot said: "Our entire police family came together today and nobody would begrudge the NSW Police Force for enjoying a bit of pomp and ceremony after the 18 months that they have gone through. Hats off to all those constables that attested today."