EXCLUSIVE: ‘My mother was NOT a sex slave’: Bestselling author of The Tattooist of Auschwitz faces legal action over new blockbuster by stepson of main character as he accuses writer of ‘hurtful, devastating lies’ 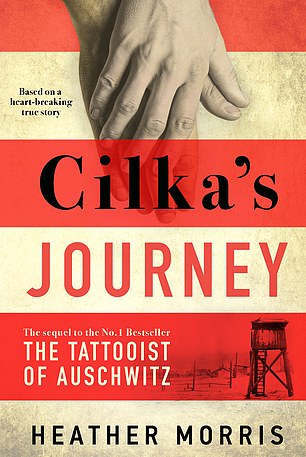 The best selling author of The Tattooist of Auschwitz faces legal action after being accused of ‘lying’ about the principal character in her latest blockbuster novel.

Heather Morris’s new book ‘Cilka’s Journey’ is based on the real life, harrowing story of Cecilia Kovachova who survived two of the greatest horrors of the 20th Century – Auschwitz concentration camp, where she was imprisoned at the age of 16 and then a brutal Soviet gulag, where she spent nine years.

But Cecilia’s stepson, George Kovach has accused her of writing ‘hurtful, devastating lies,’ and blurring the boundaries of fact and fiction.

Speaking from his home in Oakland, California, Mr Kovach, told MailOnline: ‘We’ve been trying for several months to try and address this great injustice that’s been done to Cecilia.

‘She was not a sex slave and did not do any of the things that have been written by Morris. But her publishers have not even had the decency to respond to my letters. 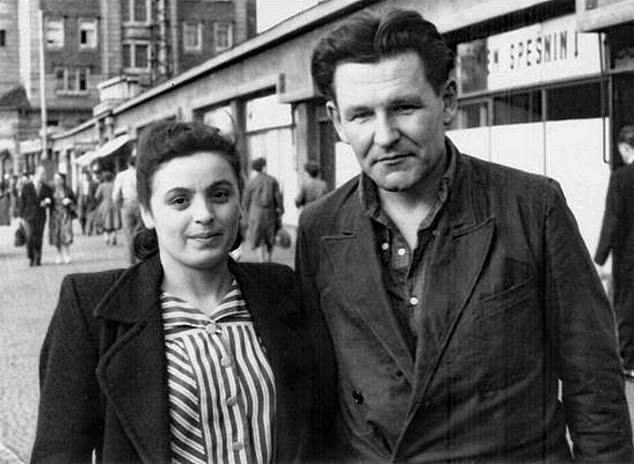 In the book, Morris writes about the life of Cecilia (pictured with her husband Ivan in around 1958) whom the writer says was used as a sex slave of two SS commanders in Auschwitz 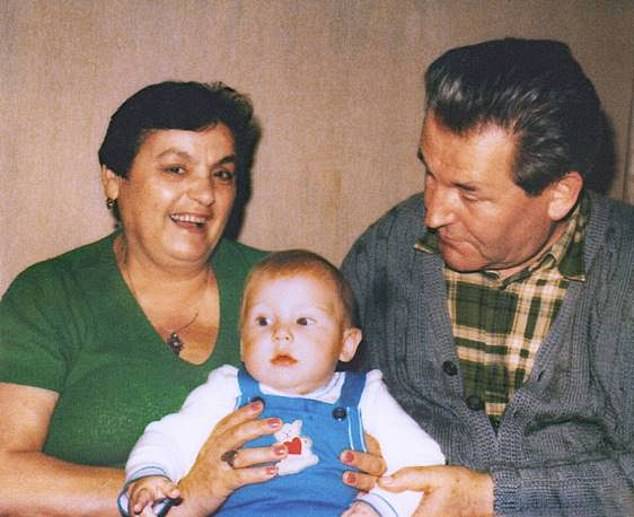 Cecilia (pictured in her later years in 1984 with husband Ivan and their grandson, Peter) was also accused by Morris of being a Nazi collaborator and sent to the Vorkuta gulag in Siberia 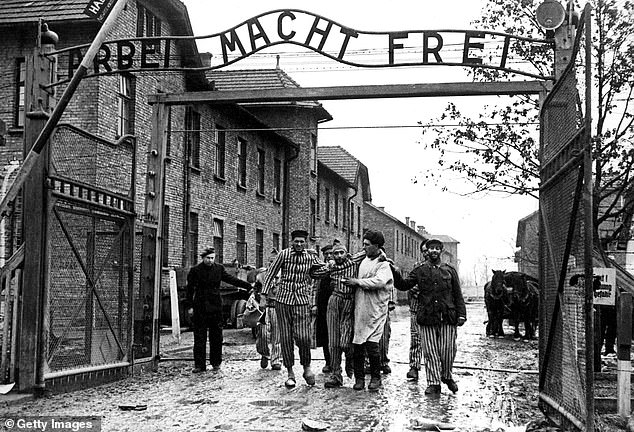 ‘The time has now come for this to be settled in court. It’s going to cost me a lot of money but it will be worth it. I’m determined to clear Cecilia’s name. She was a wonderful person, one of life’s great survivors and it makes me livid that she has been defamed in this way.’ 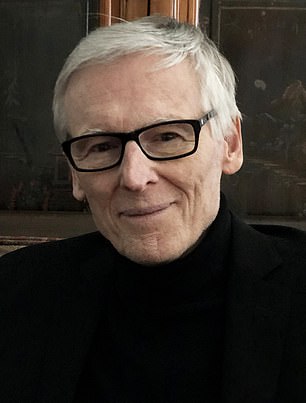 After Red Army soldiers liberate the concentration camp, she is then accused of being a Nazi collaborator and sent to the Vorkuta gulag in Siberia.

Cilka’s Journey is a sequel to Morris’s 2018 debut novel, The Tattooist of Auschwitz, which became a global hit and sold over three million copies.

Bonnier Zaffre, Morris’s publisher in the UK, refused to comment on any impending legal action.

They insisted that Cilka’s Journey is a work of fiction based on factual testimonies Morris collected during interviews with Auschwitz survivors.

A spokesperson told MailOnline: ‘The central character in Cilka’s Journey is drawn from the first-hand testimony through conversations with survivors, and through extensive research in Slovakia.’ 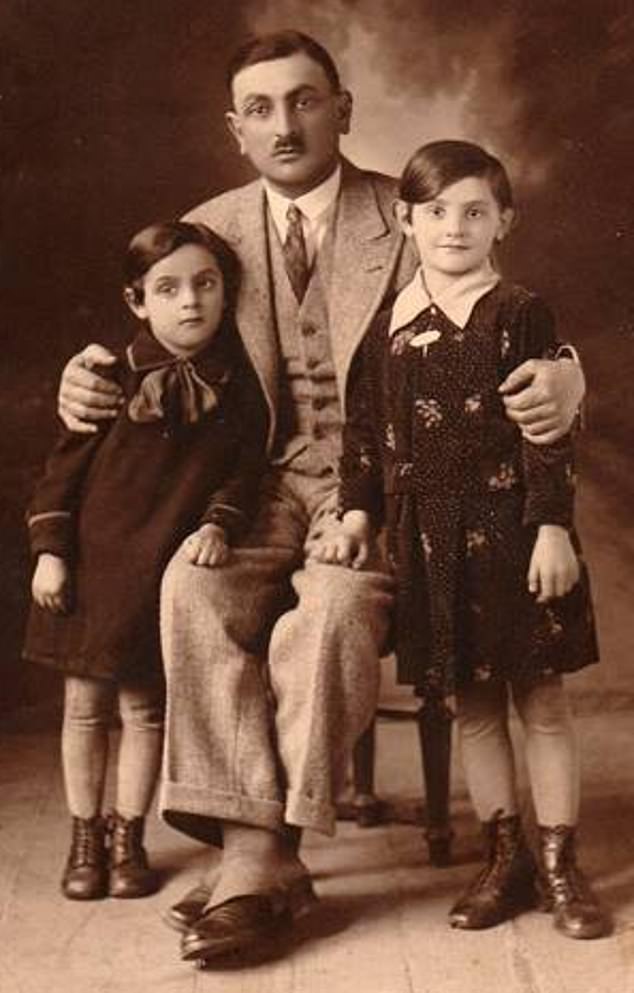 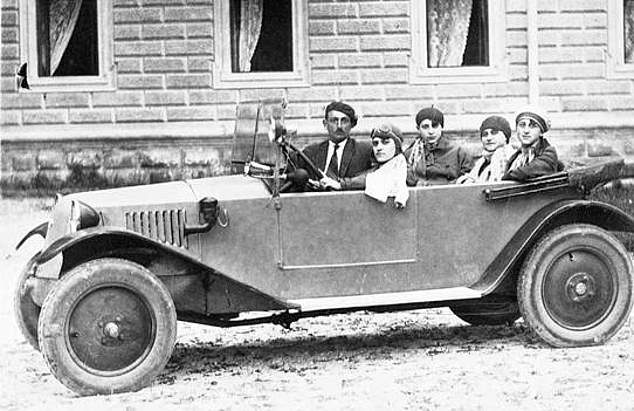 Cecilia was born in Bratislava in 1936. Here the Klein family is pictured in their car in the early 1940s before the whole family was sent Auschwitz where they all died except for Cecilia

Cecilia’s story began in Bratislava where she was born in 1936. She was the daughter of a factory manager and the family, which included her mother and a younger sister, lived in a middle class suburb of the city.

They were sent to Auschwitz because they were Jews. All of them were killed except for her.

After being liberated by the Russian Red Army from Auschwitz, Cecilia was accused of collaborating with the Nazis and thrown in the Vorkuta gulag in Siberia for nine years.

At the brutal Soviet workhouse she met Ivan who had been sent there in 1948 following the invasion of Czechoslovakia by the Soviets after he was accused of being a ‘class enemy.’

After their release from the Russian gulag in 1957, Ivan and Cecilia returned to live in Bratislava, which is now the capital of Slovakia. She died there in 2004, aged 68. 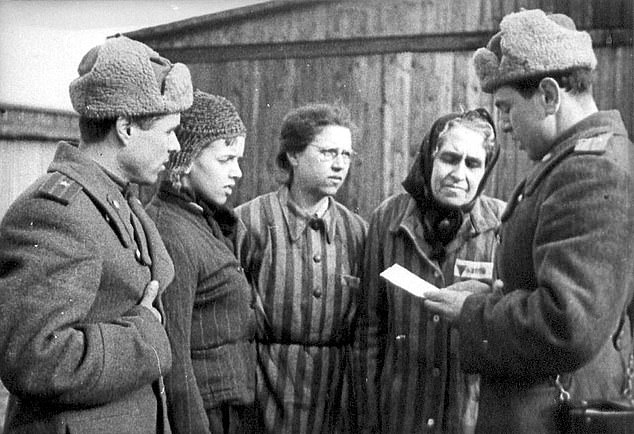 Soviet soldiers are seen with some of the prisoners they liberated in the Auschwitz death camp in Oswiecim, Poland. Some 7,000 prisoners were still alive when the camp was taken over 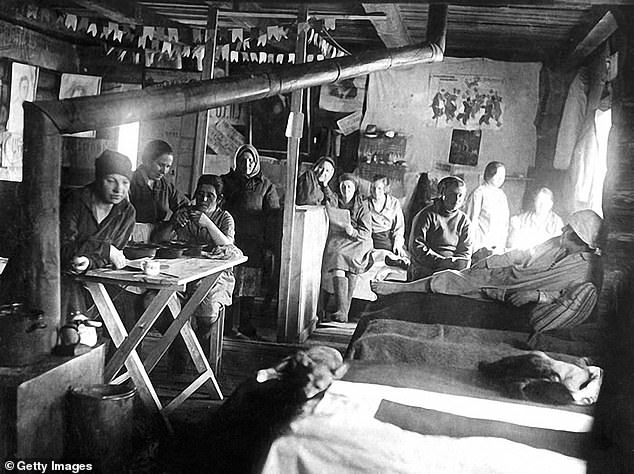 Prisoners in their shack in the Vorkuta Gulag (Vorkutlag), where Cecilia spent nine years until her release in 1957, which was one of the major Soviet labor camps, Russia, Komi Republic

Mr Kovach said: ‘If anybody knows Cecilia’s true story, it’s me. My stepmother’s name is being used to make money from this book. This is all about filthy lucre; it’s as simple as that.

‘For me, this court action is not about money, it’s about setting the record straight. Just because Cecilia is dead, it doesn’t give you the right to write these disgusting lies about her.’ 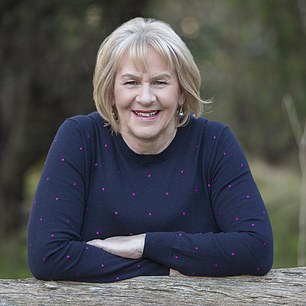 After firing off a series of angry letters to Morris and her publishers, following the book’s successful release last year, Mr Kovach’s lawyers believe they have now established that they have the right to bring the case in a US court utilising Slovakian law, which allows the relatives of people to protect their reputation even after death.

Raymond Markovich, who is representing Mr Kovach, told MailOnline: ‘We have a valid claim under Slovakian law, which can be heard in a US Federal court. There are many legal systems where you cannot take action against those who libel the dead but that is not the case in Slovakia, where Cecilia lived until her death.

‘This is a woman who survived survived Auschwitz, a Soviet gulag and then when she’s dead, she’s been unjustly trashed. How can that be right?’

Morris initially came across her story while researching The Tattooist of Auschwitz, which is based on the life of Slovakian Jew Lale Sokolov. 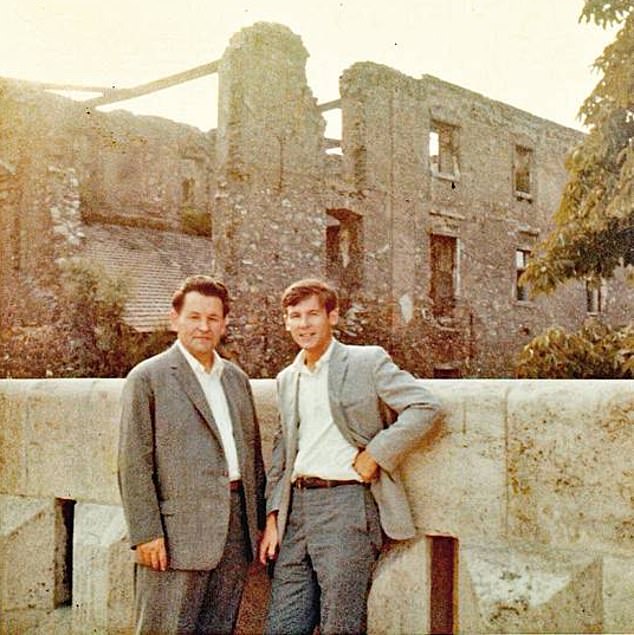 Cecilia met her husband Ivan in the Russian gulag. Prior to his imprisonment, Ivan instructed his wife Helen to divorce him and flee to the west with their son George as he was afraid she would be arrested George be sent to an orphanage. Father and son are seen reunited in 1967 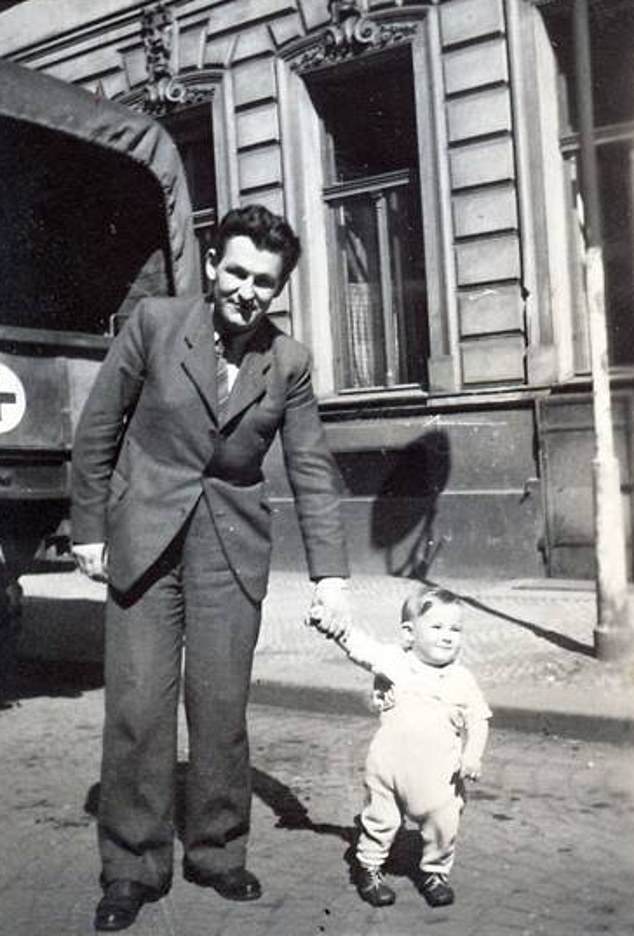 Cecilia’s husband Ivan and his son George are seen here in Prague in 1946. After George  Europe when Ivan was arrested by the Russians in 1948 they fled to Canada and then the US

Cilka’s character briefly appears in this book as the sex slave of an SS commander, prompting the author to further investigate her, which resulted in Cilka’s Journey.

During her research Morris travelled to Oakland to meet with Mr Kovach, where she asked him to contribute pictures and an afterword to the book. 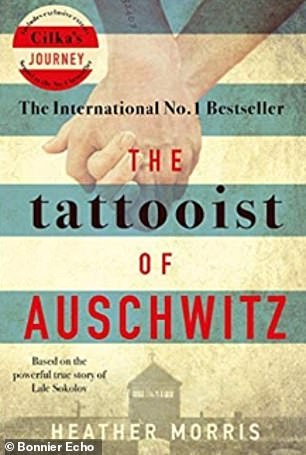 At the meeting Mr Kovach explained to Morris how, prior to his imprisonment, Ivan instructed his wife Helen to divorce him and flee to the west as he was afraid that she too would be arrested and his son sent to an orphanage.

Mr Kovach, who was aged three-and-a-half at the time, and his mother escaped to the west in 1948, going first to West Germany, then Canada and then on to the US, where they eventually settled. Over the years she managed to find out information about Ivan through his relatives, whom she kept in touch with.

Mr Kovach was reunited with his father in 1967, when he was aged 22, rebuilding his relationship with him and also getting to know Cecilia and learning of her inspirational story. He would regularly meet them both up until the time of their deaths.

He said: ‘After reading some of her material I made it clear that I wanted nothing to do with this project.

‘I asked that the book not be published, which was never going to happen or that they make it clear that Cilka is a completely fictional character. Initially, my father Ivan was also portrayed in this novel. Readers have been misled by what is a pack of lies.’

Morris subsequently removed Ivan from the book, replacing him with the character of Alexandr.

Speaking about the book last year, Morris said: ‘Cilka’s story is one of burning injustice. She was just a girl, a teenager, who lived through two of the most evil periods in history and became a spoil of war. Only shame stopped women like her talking about what had been done to them. This book is, I hope, about the transference of that shame.’ 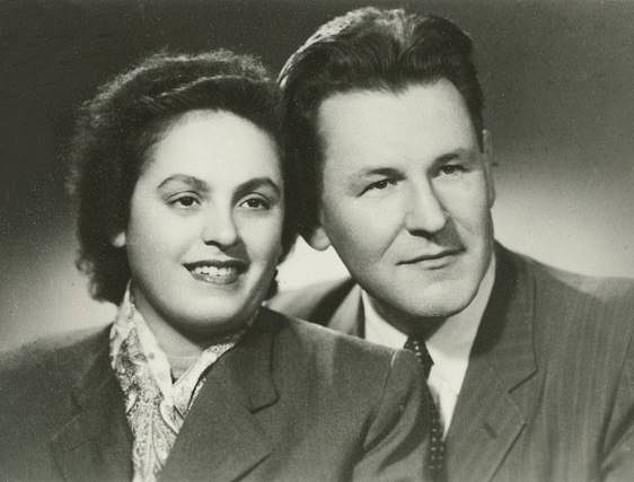 This is not the first time that Morris has been criticised for blending fact and fiction. The Tattooist of Auschwitz was slammed by the Auschwitz Memorial Research Centre, which protested that it contained ‘factual inaccuracies’ and was littered with ‘inconsistent information.’

Mr Sokolov’s son Gary also raised concerns over ‘factual inaccuracies’ in the book while media reports suggested that he had fallen out with Morris over money, following its huge success.

Morris responded at the time: ‘I don’t think it’s Gary; I think it’s his wife. She’s become fixated on what she says are some mistakes, but I’ve said from the start, all I’m doing is telling the story that Lale told me.’

Auschwitz, Hea, of, tattooist, the
You may also like:

While You Were Sleeping: 5 stories you might have missed, March 31

Coronavirus: Families worry kids will fall behind in school due to online challenges