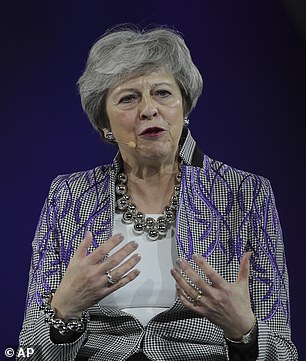 The ex-premier told a women’s conference in the Gulf she had been forced to get changed into evening clothes behind a make-shift screen, ahead of an official dinner

Theresa May once had to undress in the cockpit of an RAF jet in the middle of a flight, the former prime minister revealed today.

The ex-premier told a women’s conference in the Gulf she had been forced to get changed into evening clothes behind a make-shift screen en-route to an official dinner.

The eye-watering admission from the normally straight-laced ex-PM came at the Global Women’s Forum Dubai, where the audience included Ivanka Trump.

Asked if she had faced any tricky moments as a female PM, she spoke of a trip on an RAF flight with no changing facilities – but with staff prepared for any eventuality.

‘They took up me into the cockpit, there with two pilots, and I’m thinking ”really?”,’ she said to applause and laughter.

‘A chap comes along with sticky tape and a sheet, and he stuck it up behind the pilots and says: ”There you go, you can change behind that”,’ she said. 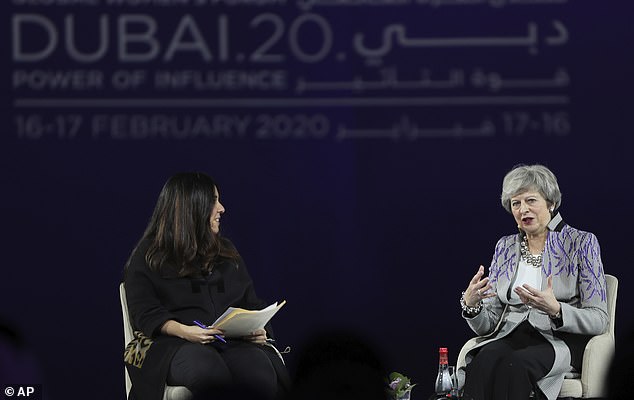 She was speaking on stage with the United Arab Emirates’ ambassador to the United Nations, Lana Nusseibeh (left)

She was speaking on stage with the United Arab Emirates’ ambassador to the United Nations, Lana Nusseibeh.

Ms Nusseibeh shared her own ’embarrassing’ anecdote, saying that once while trying to keep up with the UAE’s foreign minister on the streets of New York, she got her heel stuck in a gutter and it broke off. She did her best to keep up.

Mrs May also spoke about a type of boys-club culture that existed when she first entered the House of Commons as a member of parliament in the late 1990s, with ‘a huge emphasis on the men sort-of drinking together and getting together into groups.’

‘Some of the women felt they had to join that, and I didn’t,’ she said.