The Ukip leader correctly identified the jumped-up functionary as a “danger to nation states”. 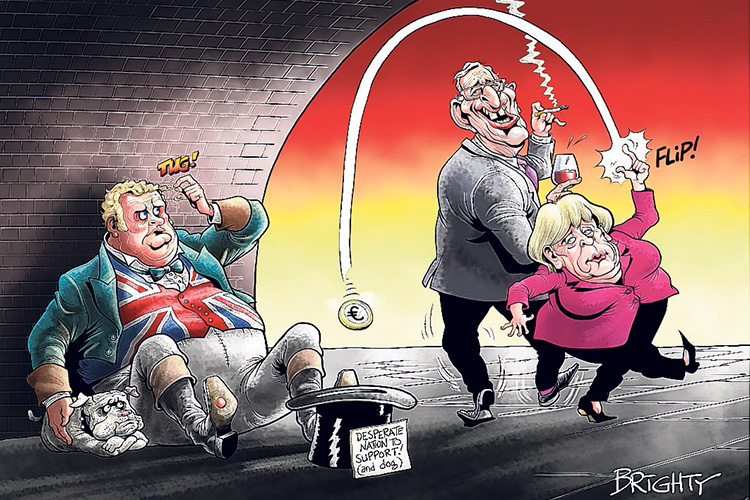 But Van Rompuy is enjoying the last laugh.

Describing Britain’s Brexit nightmare, he says: “We have them with their backs to the wall, facing the abyss and with a knife to their throat. We are almost there.”

In the sneering words of ex-Whitehall panjandrum John Kerr, who devised the Hotel California-style check-out-but-never-leave rules for Brexit, Britain has “come to heel”.

Stabbing each other in the back

Whatever emerges from the ashes of this week’s Commons votes, nothing can conceal the humiliation this country has suffered under Theresa May’s lock-jawed leadership.

The PM has tarnished one of the jewels in the British crown — respect for this once-great nation in the eyes of the world.

Thanks to her, a clutch of faceless EU bureaucrats and their feckless Tory allies have shredded the UK’s reputation for statesmanship and cool diplomacy. Great Britain — the world’s fifth-largest economy, nuclear power and permanent member of the UN Security Council — has been reduced to an object of international pity.

Allies across the Commonwealth, America and even our erstwhile EU partners (France apart) are embarrassed to watch a great democracy grovelling before the unelected Burghers of Brussels.

He might persuade enough Tory MPs to vote Mrs May’s botched and rebadged Chequers Deal through Parliament. But it will be at enormous cost.

Go down with the sinking ship

Barring an unlikely last- minute face-saver, Remainers have won this battle and the 17.4million people who voted for Brexit have been comprehensively whipped.

We can blame conspirators such as Tony Blair and ex-Chancellor George Osborne. We can point the finger at the BBC, Whitehall and a clutch of Cabinet plotters.

We can blame the Brexiteers themselves for tripping over while stabbing each other in the back.

And we can certainly blame Phil Hammond for blocking preparations for No Deal — our sole trump card in Brexit negotiations.

But in the end, responsibility for this carnage lies with Mrs May. Indeed, thanks to her, Spreadsheet Phil can now bribe MPs with the £20billion he saved by selling us down the river.

'WE CAN BLAME TONY BLAIR'

If his chicanery succeeds, there is a remote chance Parliament will support Chequers and sign up to Brino — Brexit In Name Only. It will be a sour “victory”.

History might be kind to Mrs May’s decency and her sense of public duty. But it will not ignore the catastrophic blunders which risk condemning this country to permanent vassal status.

Foreign Secretary Jeremy Hunt correctly warns Europe has just as much to lose. “This is a moment of change in our relationship between the UK and the EU and history will judge both sides very badly if we get this wrong,” he says.

“We want to remain the best of friends. That means getting this agreement through in a way that doesn’t poison our relations for many years to come.”

Stubborn as she is, Mrs May must know her days as PM are numbered.

Losing three babies in quick succession is an unimaginable tragedy in any circumstances.

In Shamima Begum’s case it underlines the recklessness of bringing children into the world of terrorist anarchy. Nothing Home Secretary Sajid Javid could have done in the few weeks since she emerged in public is likely to have saved her innocent child.

The responsibility lies entirely with Shamima and her jihadi husband, Dutchman Yago Riedijk.

There is no chance of her surviving what threatens to be disastrous spring council elections.

Certainly there is no question of leading the Government into the next round of EU negotiations, still less risk another general election meltdown.

Countless Tory supporters will risk letting Jeremy Corbyn in rather than vote for another May-led government.

There is a deal to be had with pro-Brexit MPs who are threatening to inflict a final defeat on Chequers tomorrow.

The consequences are unpredictable.

If she promises to go by mid-summer, they will vote for her deal. If that works, she will at least be able to claim victory of a kind.

It’s a long shot. The alternative is to go down with a sinking ship.