Police have charged a third person linked to the fatal stabbing of a Langwarrin carpenter outside a train station in Melbourne’s south east.

Homicide Squad detectives charged an 18-year-old Frankston man on Saturday morning over the death of Cam Smith, who died after going to the aid of his girlfriend who was allegedly being abused by a group of people outside Seaford train station.

He is the third person charged over the incident. There have been four arrests but a 21-year-old woman from Somers has not been charged. 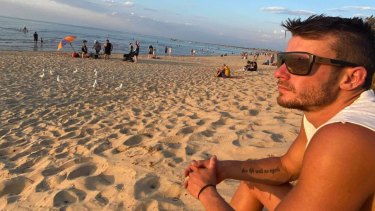 Cam Smith’s grieving father says his son was a hard worker with a heart of gold.

The teen was charged with affray, assault and committing an offence while on bail and remanded overnight to appear at Melbourne Magistrates Court today.

Another accused, Jack Ledlin, 19, appeared before Melbourne Magistrates Court on Friday where police allege he used an edged weapon to stab Mr Smith once in the chest. He was remanded to March 25 next year for a committal mention.

Another accused, a 17-year-old boy, who cannot be named, has been charged with affray, intentionally causing injury and committing an offence while on bail. He fronted a children's court on Friday and was granted bail despite police concerns he would offend if released and hinder the ongoing investigation.

At the 17-year-old’s bail application, police said Mr Smith, 26, and his girlfriend were about to get into their car when they were confronted by a group of four people, after they were "berated" by two of them.

Police allege the group approached the couple in the car park outside the train station and a female smashed a bottle at the girlfriend's feet, before Mr Smith was "set upon" by the three others.

Police allege Mr Ledlin stabbed Mr Smith in the chest and after the tradesman fell to the ground, the 17-year-old and one other kicked him before fleeing.

After his arrest, the boy told investigators he had no knowledge that Mr Ledlin allegedly intended to stab Mr Smith. But he admitted to police he intended to smash a bottle and stab the carpenter, but didn't act on his plans.

Earlier on Friday, Mr Ledlin wore a white zip-up jacket as he appeared via a video link from custody and didn't say anything during his brief court appearance.

The court heard he took medication for ADHD and had been diagnosed with post traumatic stress disorder. He was remanded in custody to appear again on March 25.

Mr Smith was this week remembered by his family as "a great young man" with everything to live for.

Anyone who witnessed the incident or with information is urged to contact Crime Stoppers on 1800 333 000 or visit www.crimestoppersvic.com.au.