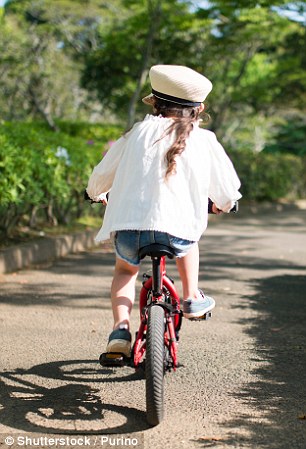 Learning to ride a bike used to be an important and pleasurable rite of passage for most children.

However, research suggests this traditional pursuit is in decline as time-pressed parents do not regularly take their youngsters to parks.

The study by environmental charity Keep Britain Tidy suggests the outdoor skills traditionally learnt by children could be dying out due to a lack of time spent outside.

Researchers, who questioned 1,000 parents and 1,000 children aged between five and 11, compiled a top ten of outdoor activities in which children have never taken part, with roller skating coming top at 77 per cent.

Despite concerns children are spending hours glued to a screen, 75 per cent of youngsters would like to spend more time outdoors. On average, a child visits an outdoor space three times a week, but only eight per cent go to the park around once a month.

The top reason given by parents for not taking their kids to the park was that they didn’t have the time. However, 80 per cent said they would like their child to spend more time outside. 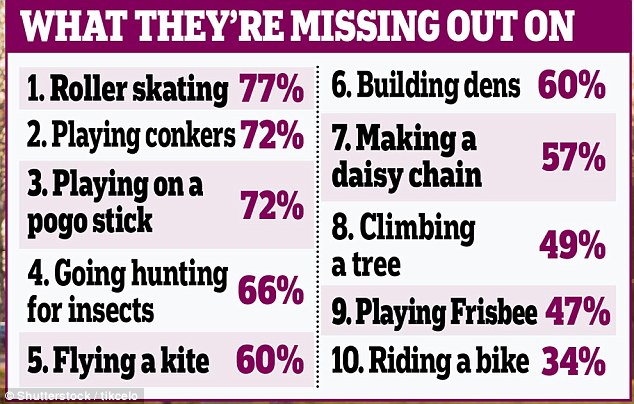 Keep Britain Tidy chief executive Allison Ogden-Newton said: ‘Parks and green spaces are an essential part of childhood. It’s great to see that, despite recent concerns about digital distractions, three quarters of our children actually want to spend more time outside, so I urge parents to help make that happen by frequenting their local green space.’

The charity commissioned the study to mark Love Parks Week, a celebration of outdoor spaces that will open with a circus skills workshop in Leicester Square, central London, on July 12

a, bike, Never, Primary, pupils, ride, taught
You may also like: