Follow
Home » World News » ‘This is not a sonic boom, this is an explosion’: Australian witnessed Beirut blast

‘This is not a sonic boom, this is an explosion’: Australian witnessed Beirut blast

An Australian holidaying in Lebanon's capital of Beirut has described the almighty eruption at the city's port that has killed at least 70 people, including one Australian.

Australian Adam Malouf, who is holidaying in Beirut from his home in Dubai, was walking near his apartment building 30km north of the blast area when he heard what he described as a "sonic boom" around 6.30pm local time. 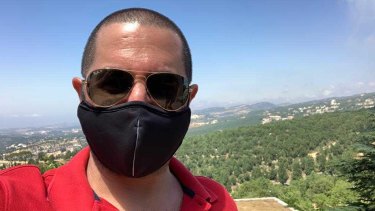 Footage circulating on social media shows widespread destruction across the city, including at the Australian embassy where a number of staff received glass injuries when the blast took out most of the building’s windows.

Mr Malouf said he received a text message from the consular emergency service of Beirut not long after the blast.

"We’ve been advised to stay put until they have more information on what’s actually happened," he said.

President Michel Aoun said that 2750 tonnes of ammonium nitrate, used in fertilisers and bombs, had been stored for six years at the port without safety measures.

It was "unacceptable", said President Aoun.

He called for an emergency cabinet meeting on Wednesday and said a two-week state of emergency should be declared.

"What we are witnessing is a huge catastrophe," the head of Lebanon's Red Cross George Kettani told broadcaster Mayadeen. "There are victims and casualties everywhere."

Hours after the blast fire still blazed in the port district, casting an orange glow across the night sky as helicopters hovered and ambulance sirens sounded across the capital.

A security source told Reuters that victims were taken for treatment outside the city because Beirut hospitals were overwhelmed with wounded. Ambulances other parts of the country were called in to help.

One medic said 200 to 300 people had been admitted to a single emergency department. "I've never seen this. It was horrible," the medic, who gave her name as Rouba, told Reuters.

"The blast blew me off metres away. I was in a daze and was all covered in blood. It brought back the vision of another explosion I witnessed against the US embassy in 1983," said Huda Baroudi, a Beirut designer.

Officials within the Department of Foreign Affairs and Trade are now trying to track down the whereabouts of the thousands of Australians who could be in Lebanon.

There are usually around 20,000 Australians – including dual citizens – in Lebanon at one time, but this number may have been affected by the coronavirus pandemic.

Mr Malouf was meant to be in Lebanon for three more weeks before returning home to Dubai, but is not sure whether he will be able to fly.

"I’ve seen photos of damage to the airport," he said.

"In time they’ll figure out what the cause of this was but at the moment it’s very unclear".