PROTESTERS across the US defied curfews put in place to quell demonstrations so they could continue to demand justice for the killing of George Floyd, who died after a police officer knelt on his neck for eight minutes.

Many have already been arrested in Minneapolis, Atlanta, Washington DC and New York after refusing to obey curfews imposed by city officials. 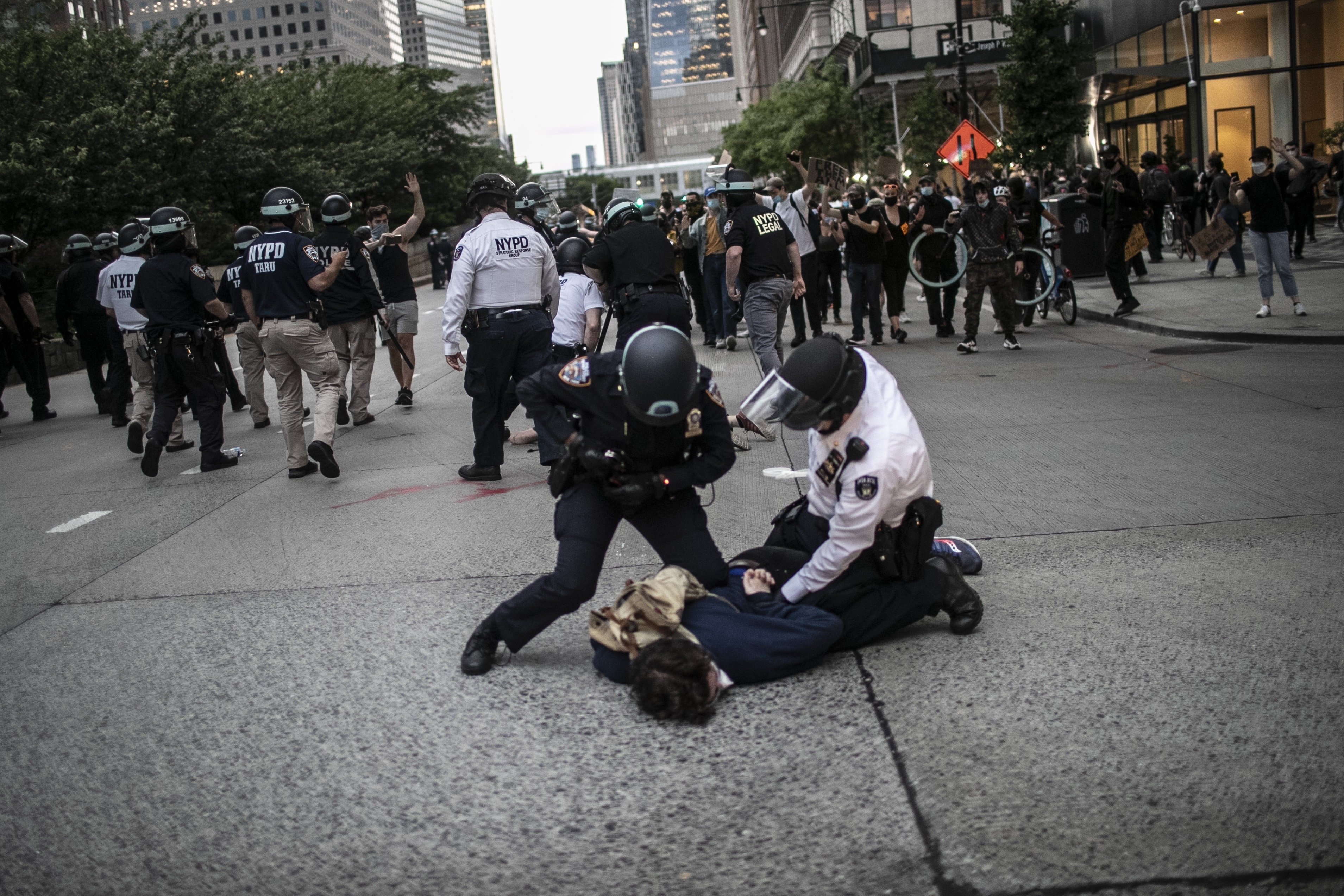 Thousands of Americans have been out in force to protest peacefully in the wake of Floyd's death, despite police officers and the National Guard using heavy handed tactics, including deploying tear gas and rubber bullets.

In New York, Mayor Bill de Blasio doubled down on a citywide curfew, moving it up from 11 pm the night before to 8pm, but rejected urging from President Donald Trump and an offer from Gov. Andrew Cuomo to bring in the National Guard.

"Everyone, time to go home so we can keep people safe," he said on WINS-AM radio shortly after the curfew took effect.

He was ignored by many around the city who continued marching throughout the city's streets. In some areas, police let people continue on their way, while making arrests in others. 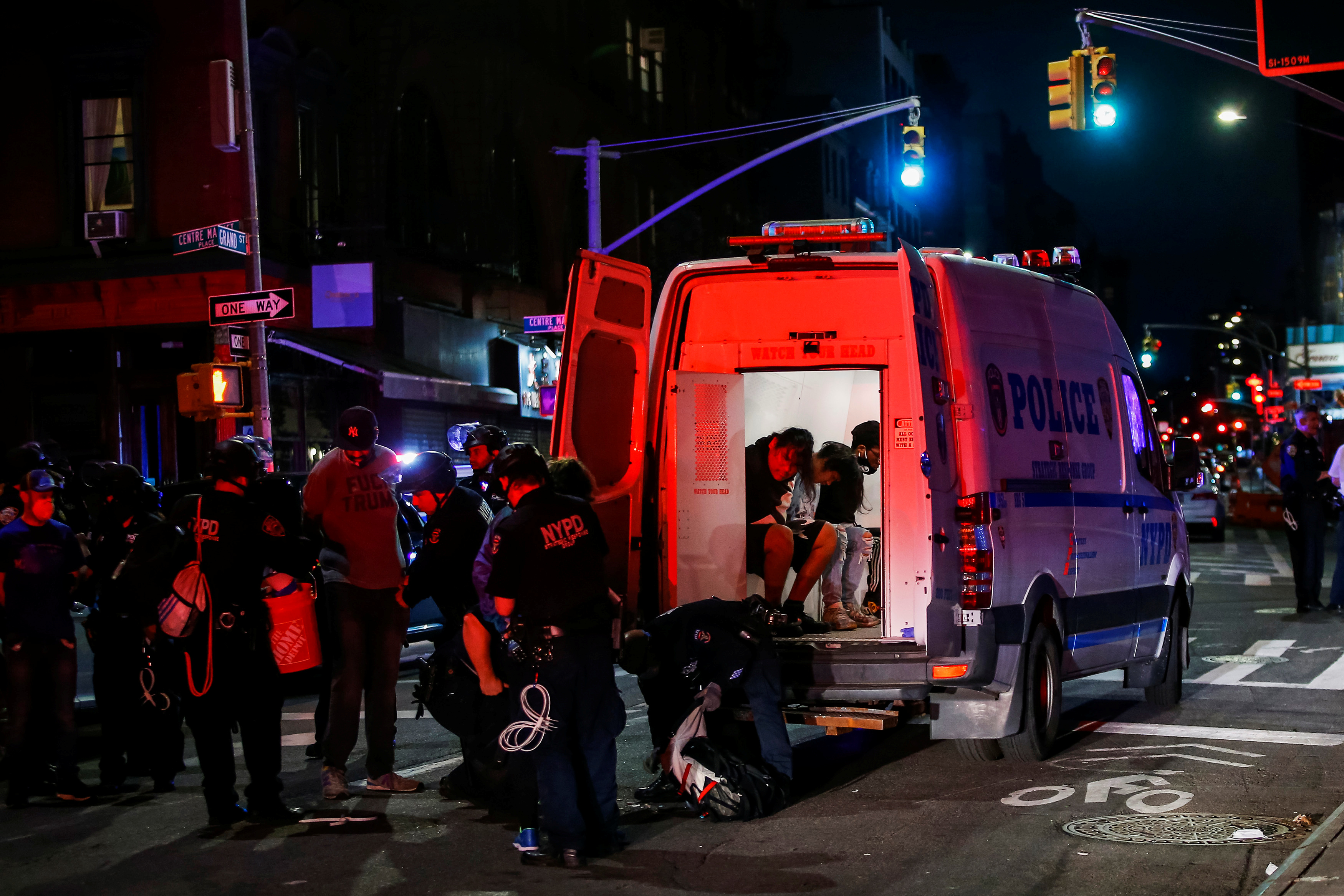 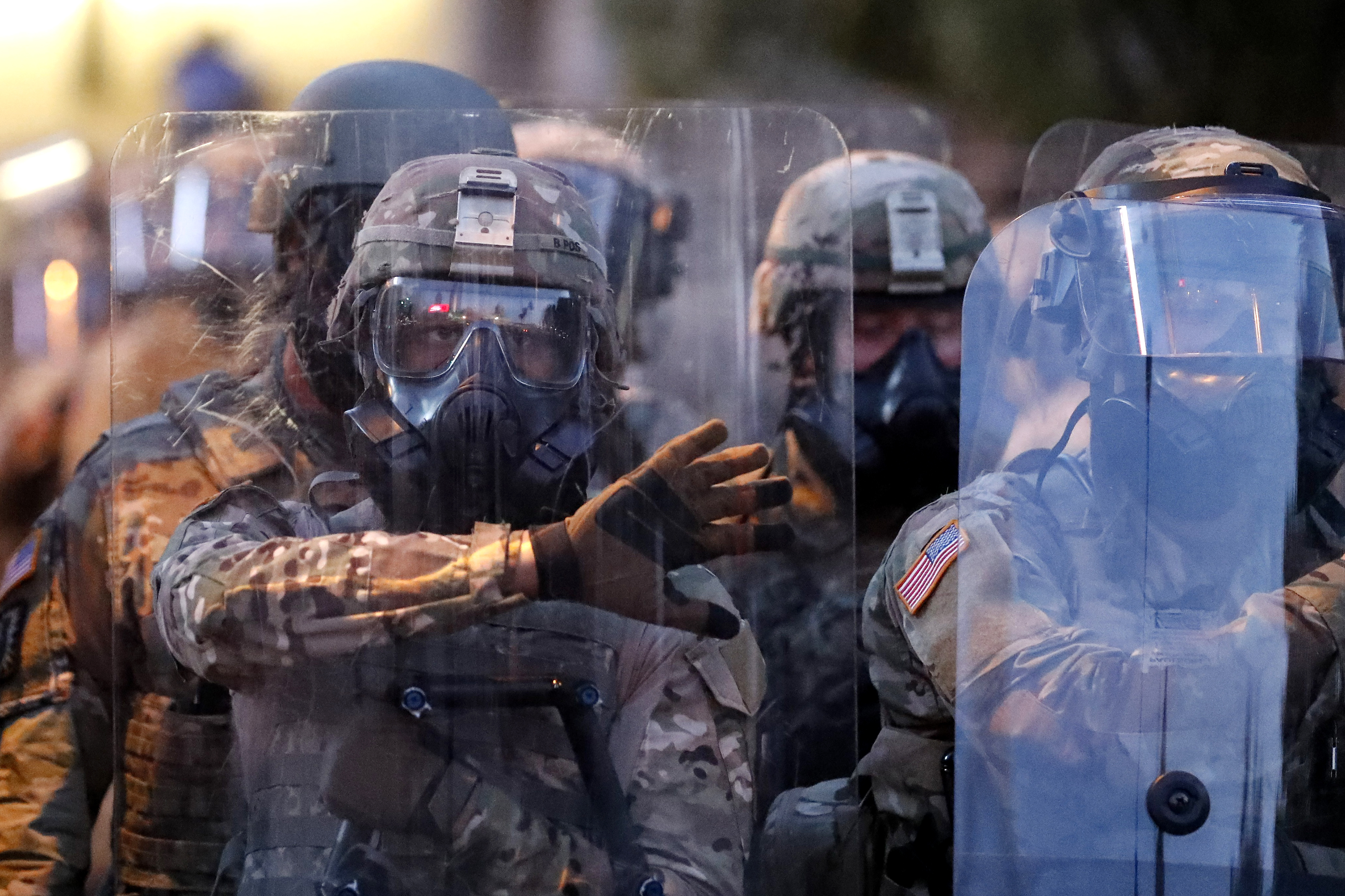 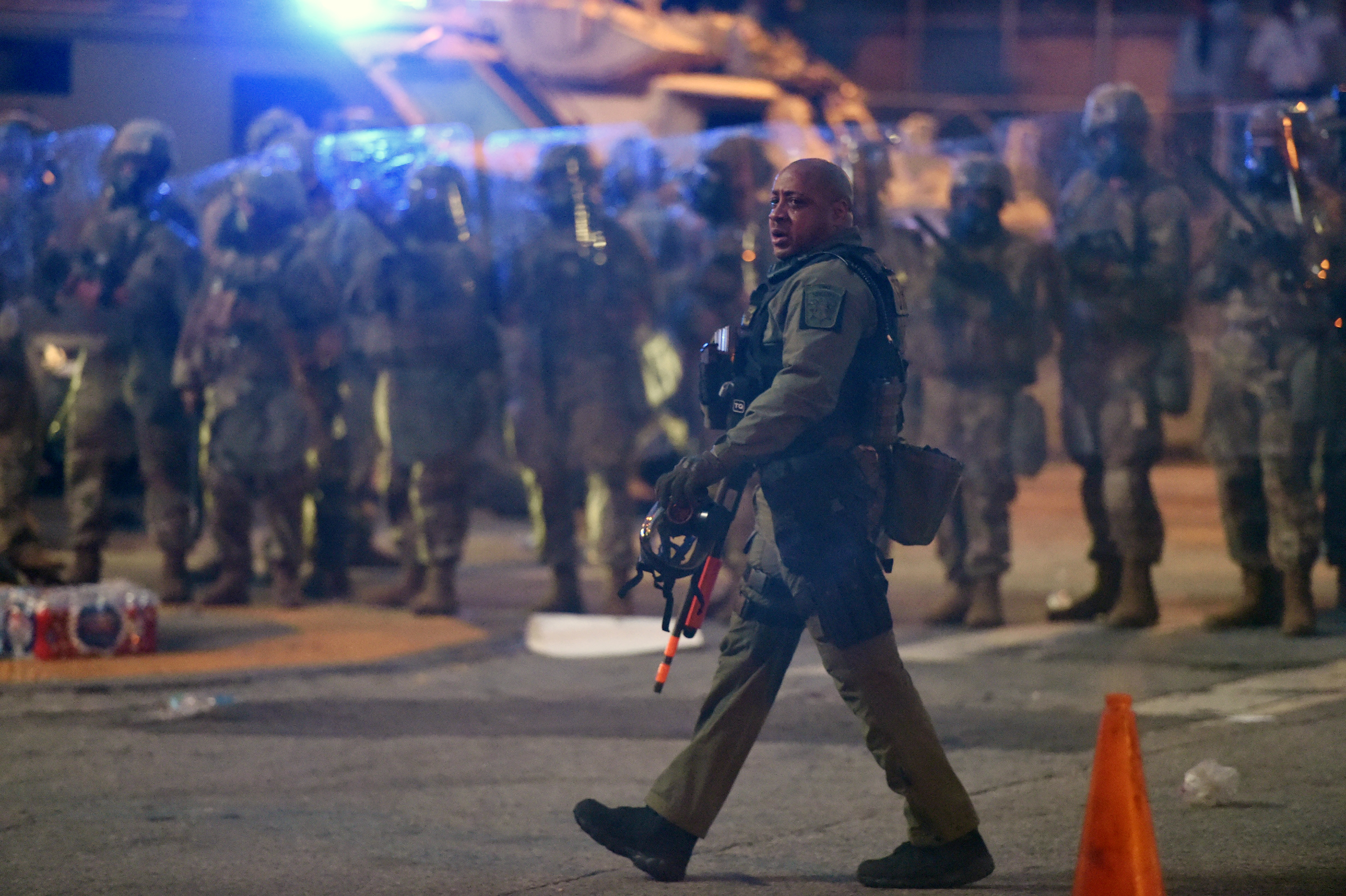 "I'm surprised," said Risha Munoz, on Manhattan's Upper West Side, where at points they were greeted with cheers and horns by onlookers in building windows. "I didn't think they were gonna let us go on, but we just kept on moving and we're not stopping."

In some locations, officers started ordering people to move along, and began taking people into custody. Demonstrators who had been on the West Side Highway in lower Manhattan were herded off, with parts of the roadway blocked off behind them.

"Something has to break, and it's not going to be us," said Evan Kutcher, one of hundreds of demonstrators who stood outside the Barclays Center chanting Floyd's name Tuesday evening.

The police department announced it would not allow vehicle traffic south of 96th Street in Manhattan after curfew, though residents, essential workers, buses and truck deliveries were exempt. 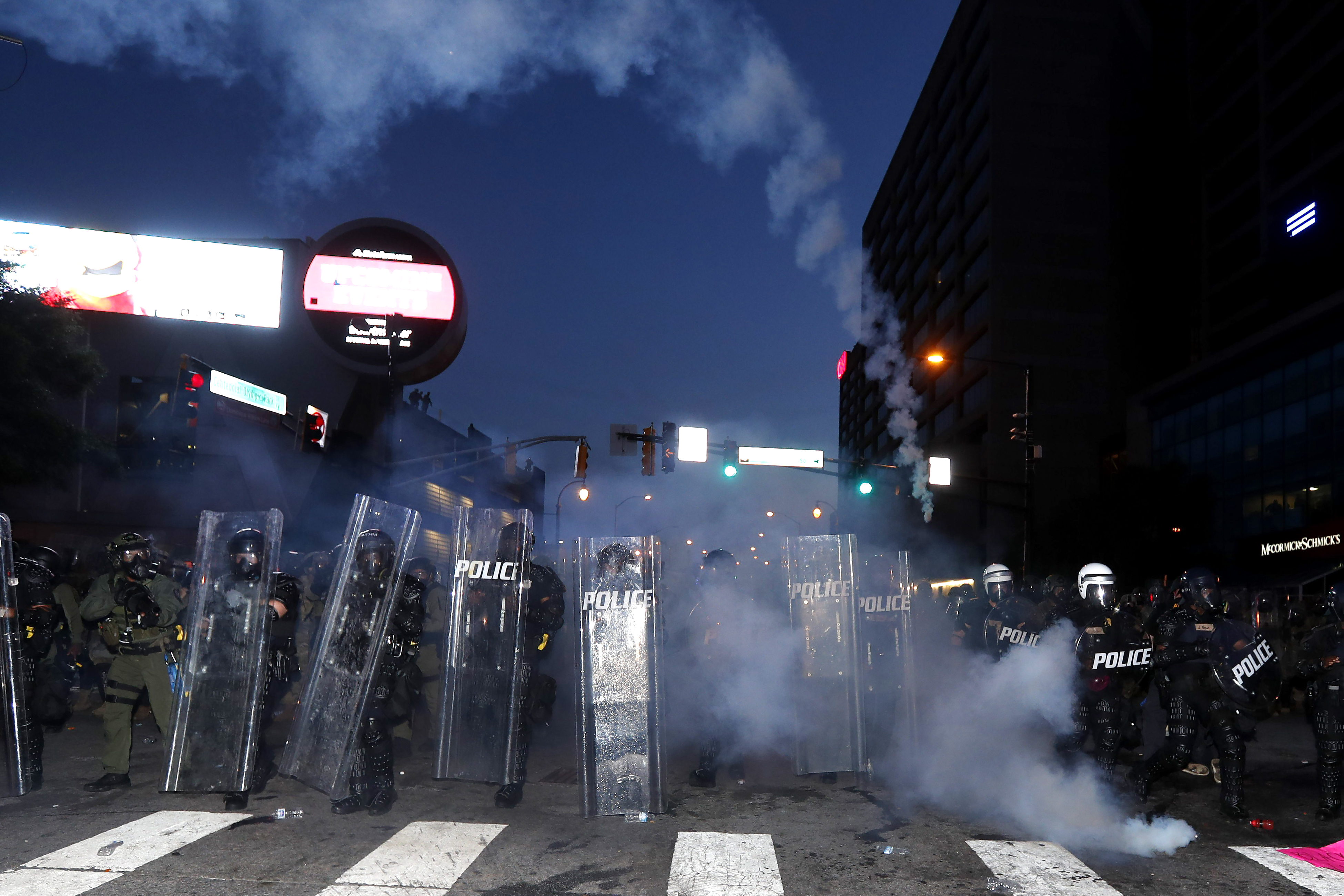 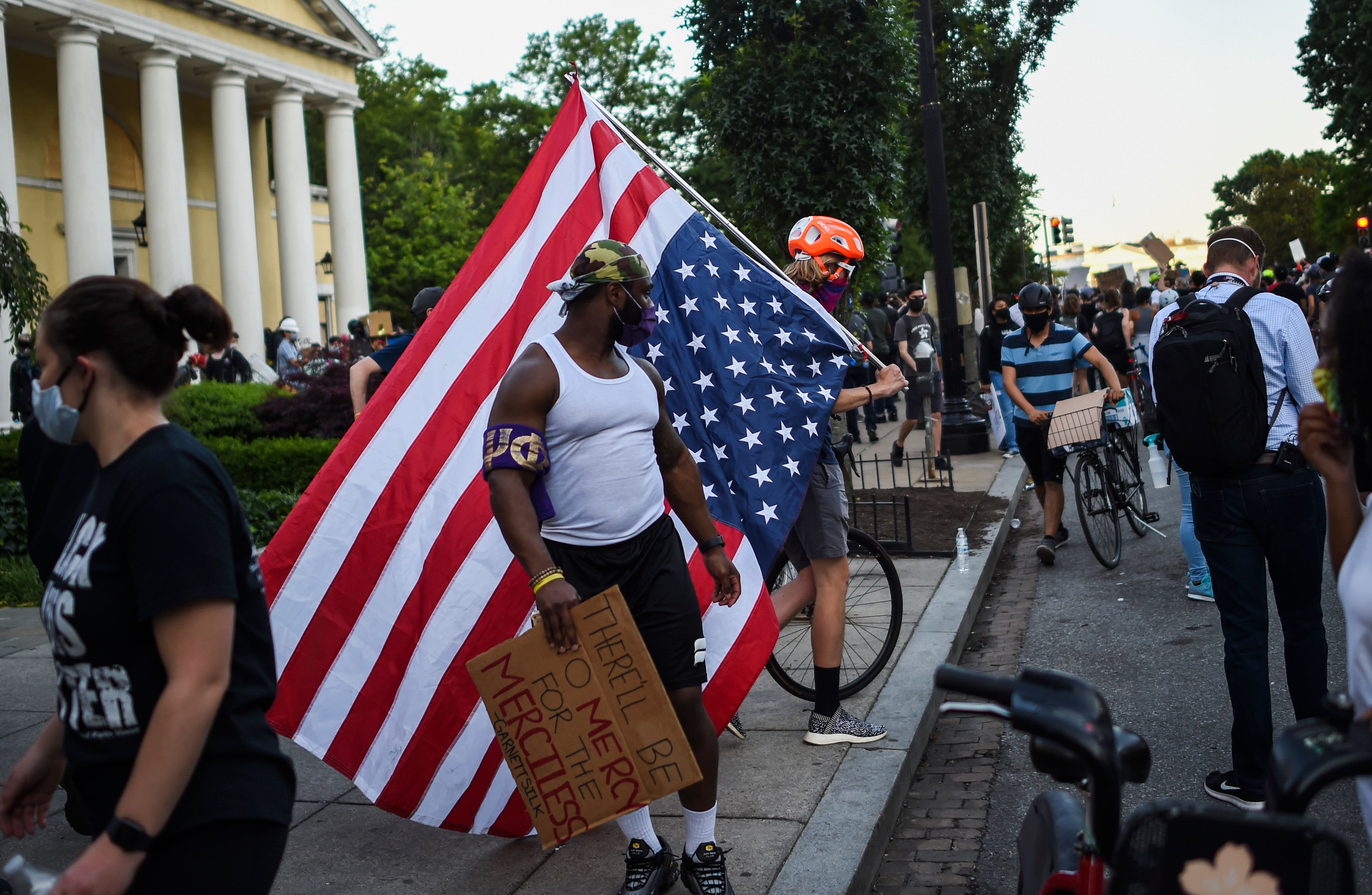 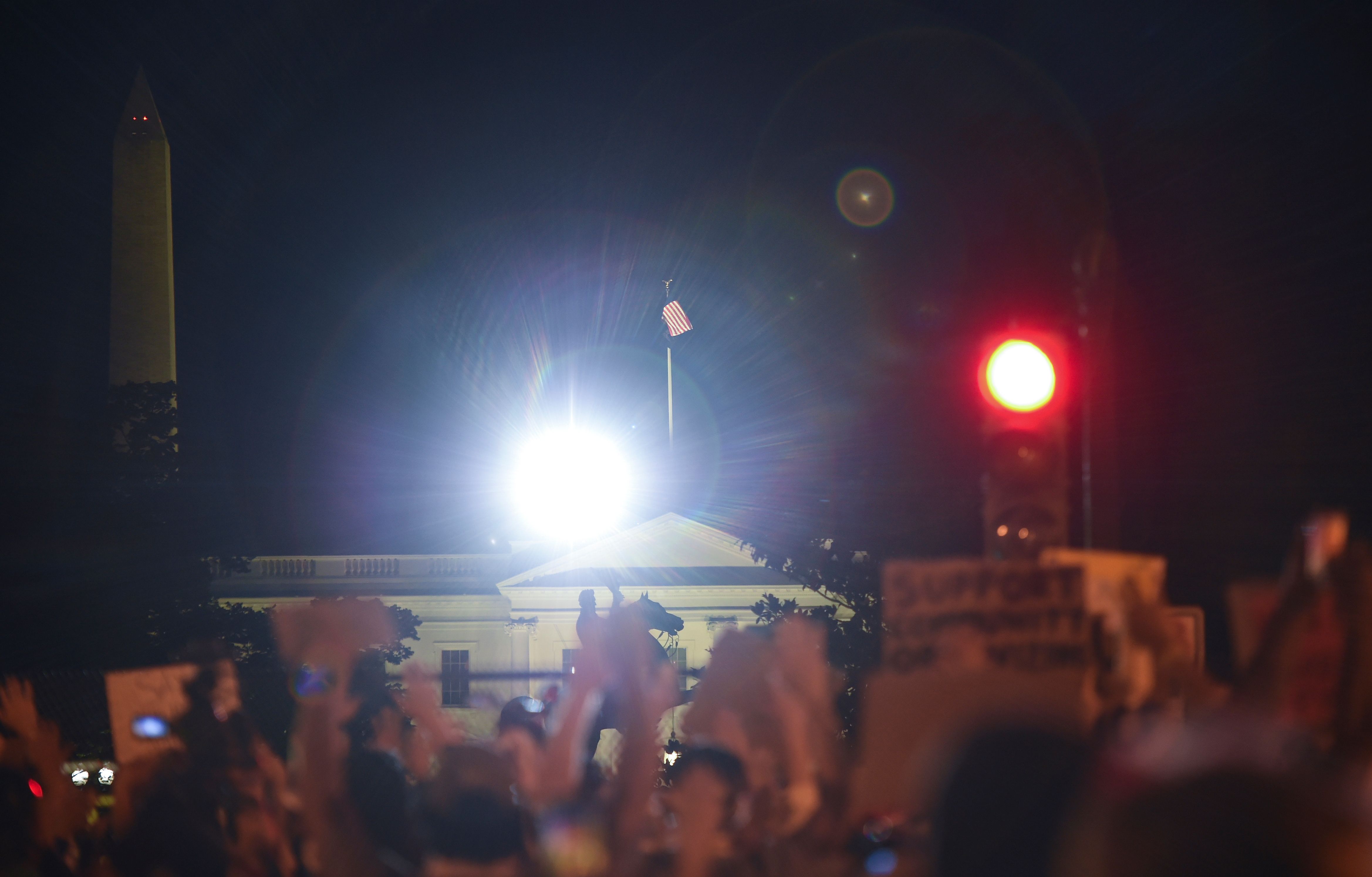 On Saturday night, a young black couple were tasered and dragged out of their car for breaking the curfew in Atlanta.

Investigator Ivory Streeter and Investigator Mark Gardner, were filmed tasing the pair and dragging them from their car during George Floyd protests.

The officers involved have since been fired.

This, however, did not prevent protesters from staying out past curfew on Tuesday night.

In Washington DC, a similar story emerged, with large crowds continuing to march long past the 7pm curfew.

The peaceful demonstrators remained in Lafayette Square – the site which Trump had cleared, by using teargas on crowds, on Monday so he could pose for a photo op. 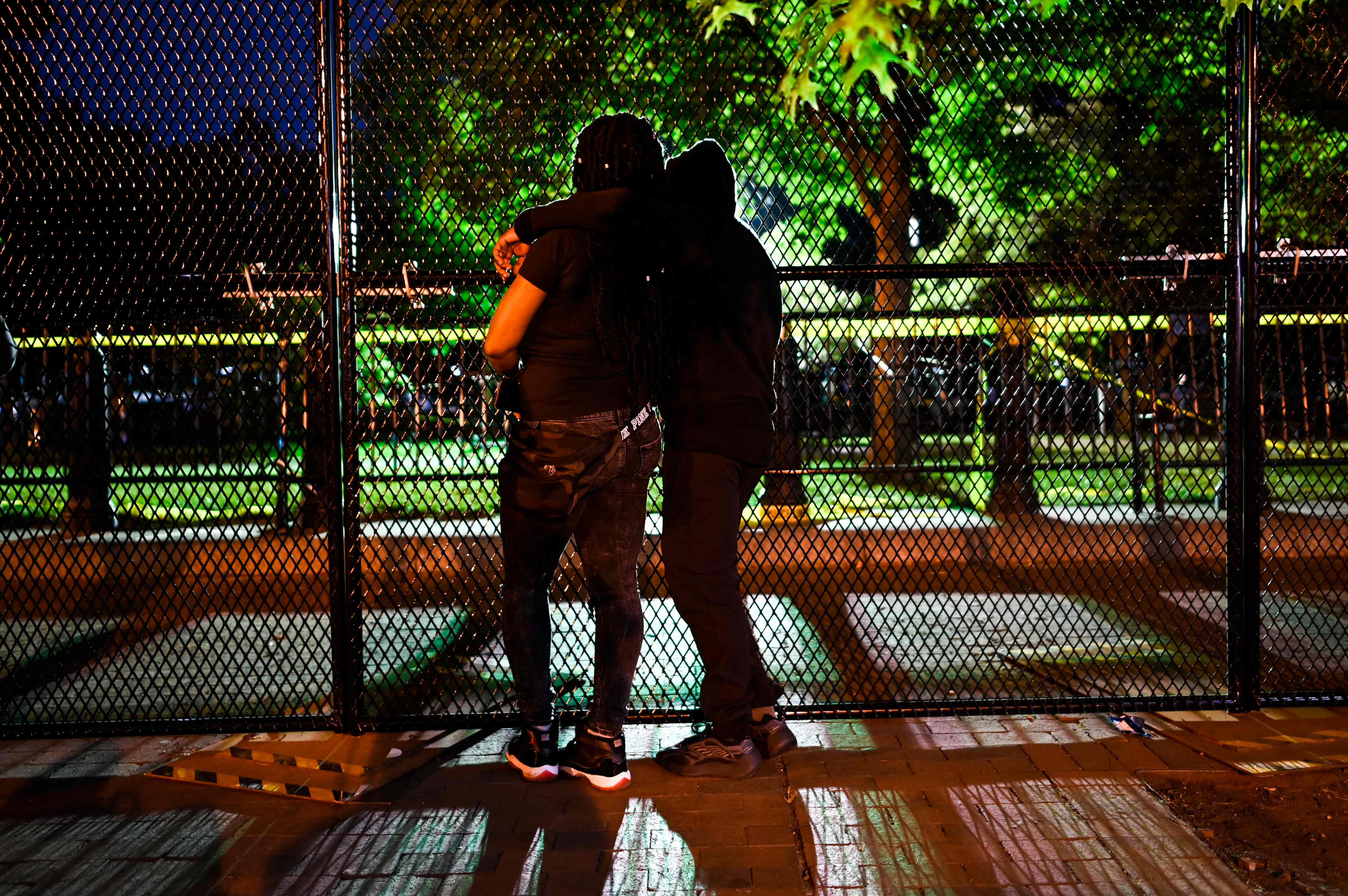 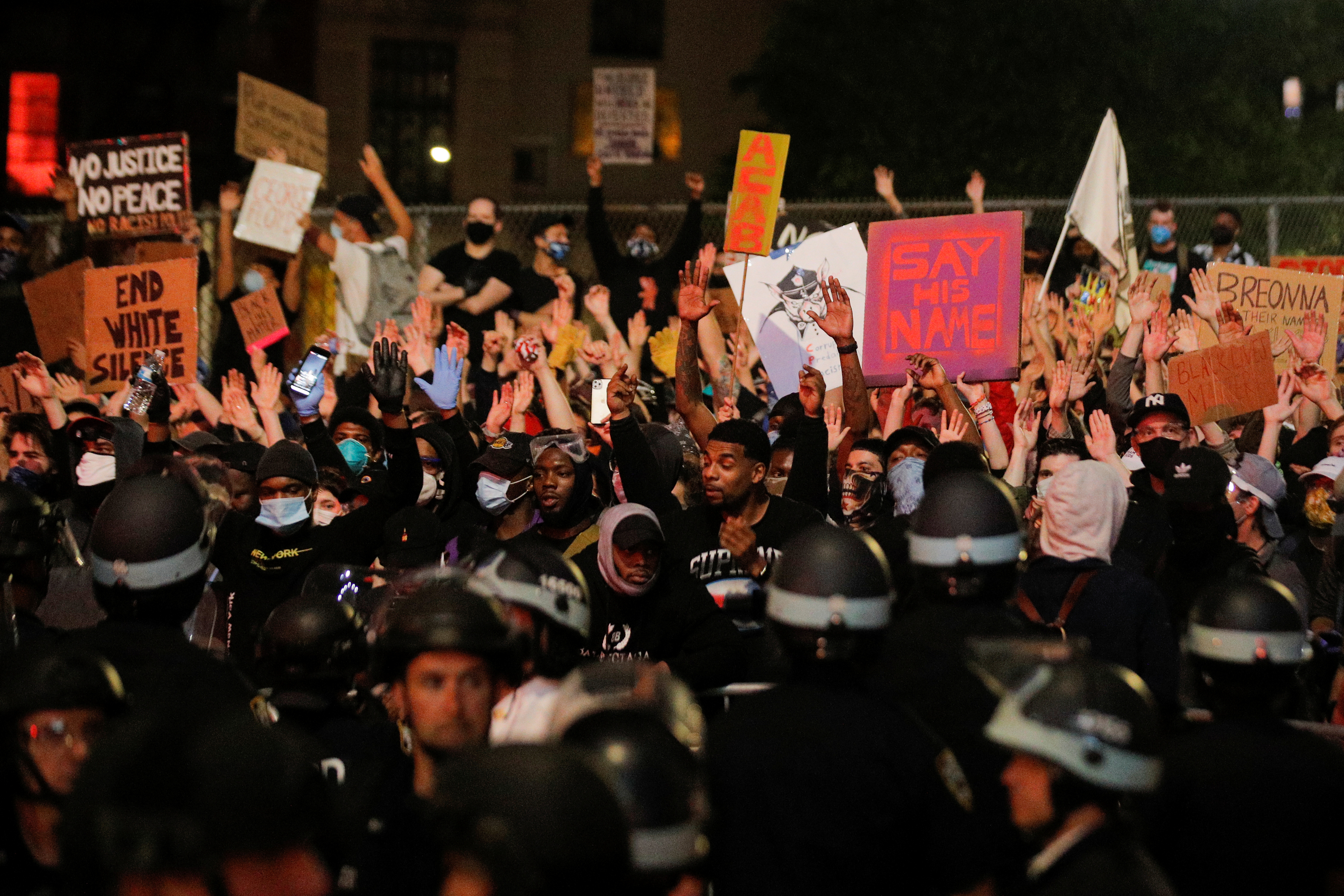 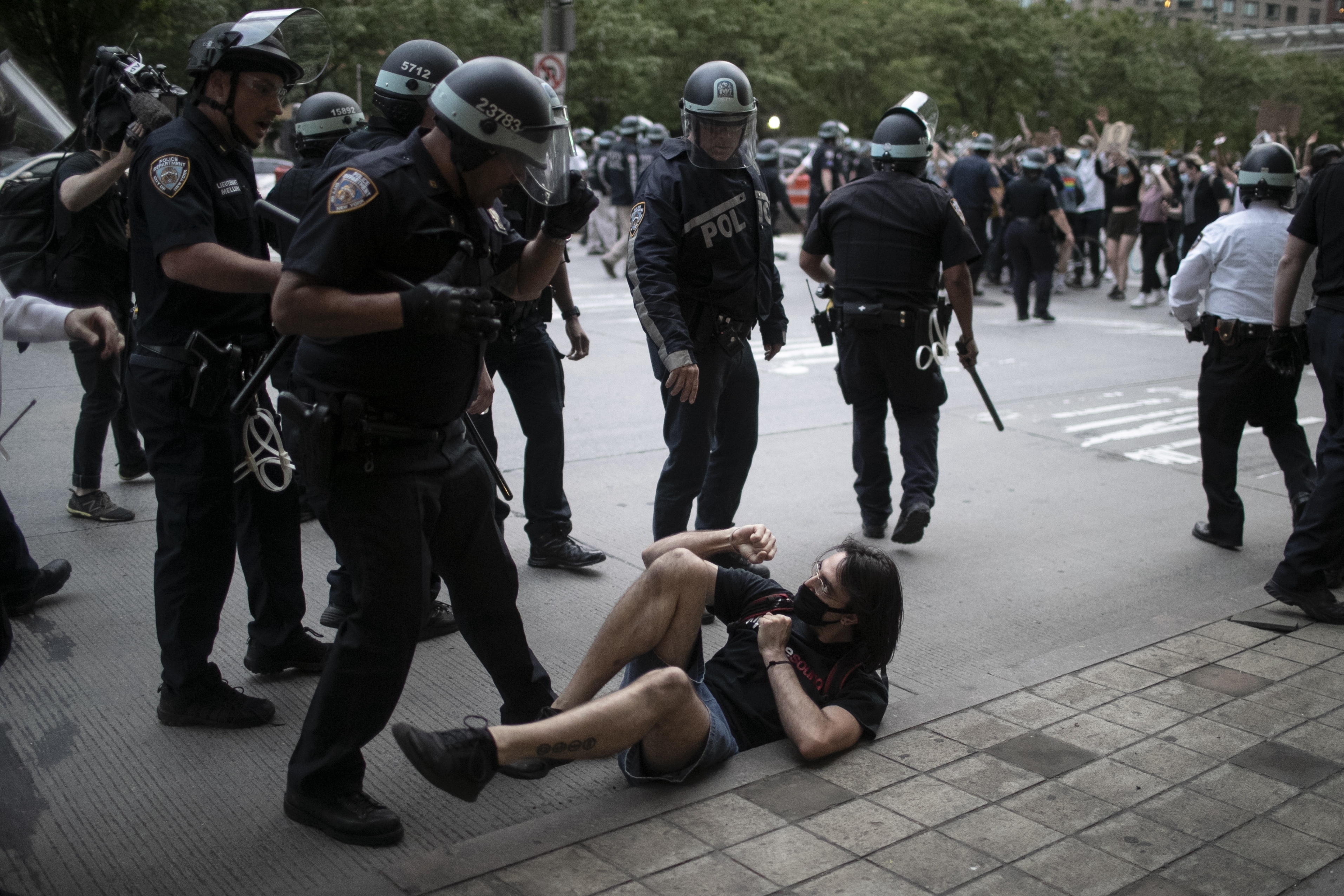 Over on the West Coast, in Los Angeles, protesters who had been marching in Hollywood all day declined to leave the streets.

Hundreds had been arrested the night before, most for breaking Monday night's curfew. Although Friday, Saturday and Sunday's protests had been hijacked by widespread violence and looting across the city, Monday remained relatively peaceful, bar a handful of incidents in Van Nuys and Hollywood.

LAPD Chief Michel Moore caused outrage on Monday after saying the death of George Floyd was on the "hands" of looters as much as it was on the police who arrested him.

"We didn't have people mourning the death of this man, George Floyd. We had people capitalizing. His death is on their hands, as much as it is those officers," he said during a press conference. 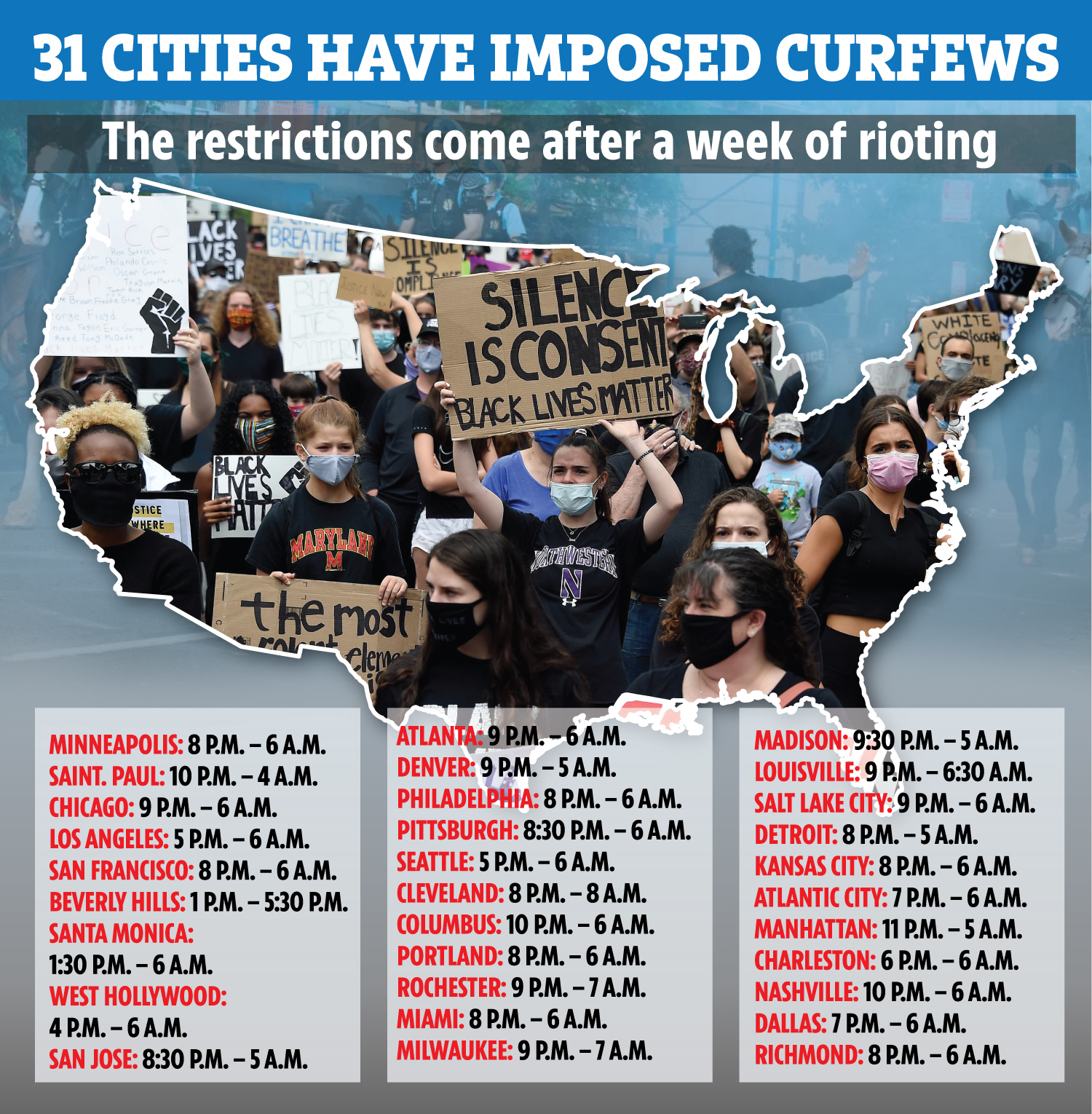 Mayor Eric Garcetti is now facing calls to fire Moore, who has since apologized for the comments.

I regret the remarks of that characterization, but I don't regret, nor will I apologize to those who are out there today committing violence, destroying lives and livelihoods, and creating this destruction.

On the same day, Trump threatened to deploy more of the military to quash protests if governors did not handle the situation themselves.

Speaking from the Rose Garden on Monday, the president said he'd put "thousands" of troops on the streets to "solve the problem" of rioting.

"America is founded on the rule of law," Trump said, adding: "If malice or violence reigns, then none of us are free".

As the president spoke, loud explosions could be heard in the background as tear gas was fired at protesters on the streets of Washington DC.

Before the speech, officers near the White House aggressively forced the protesters back, firing tear gas and using flash bangs to disperse them from the park where they had gathered. 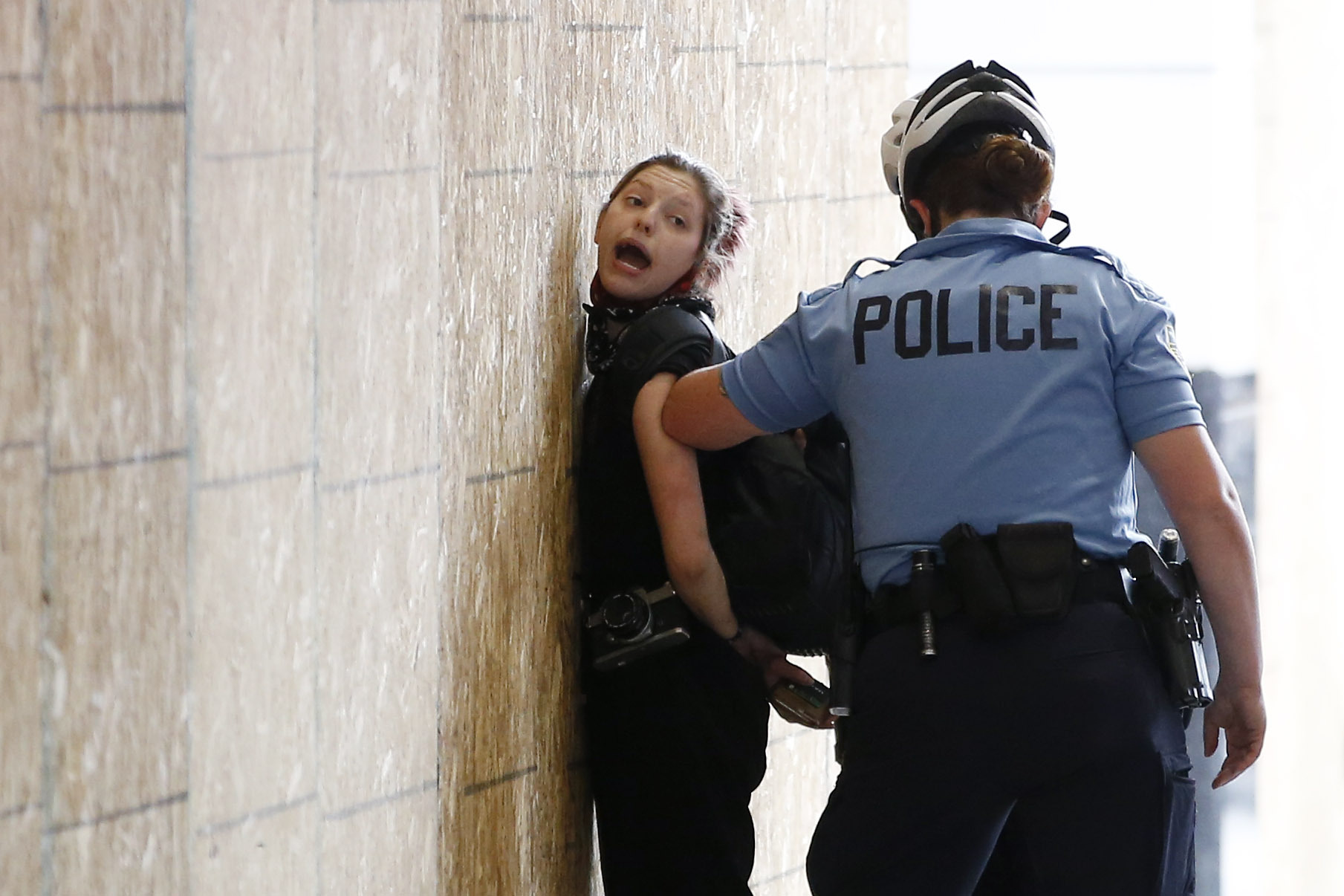 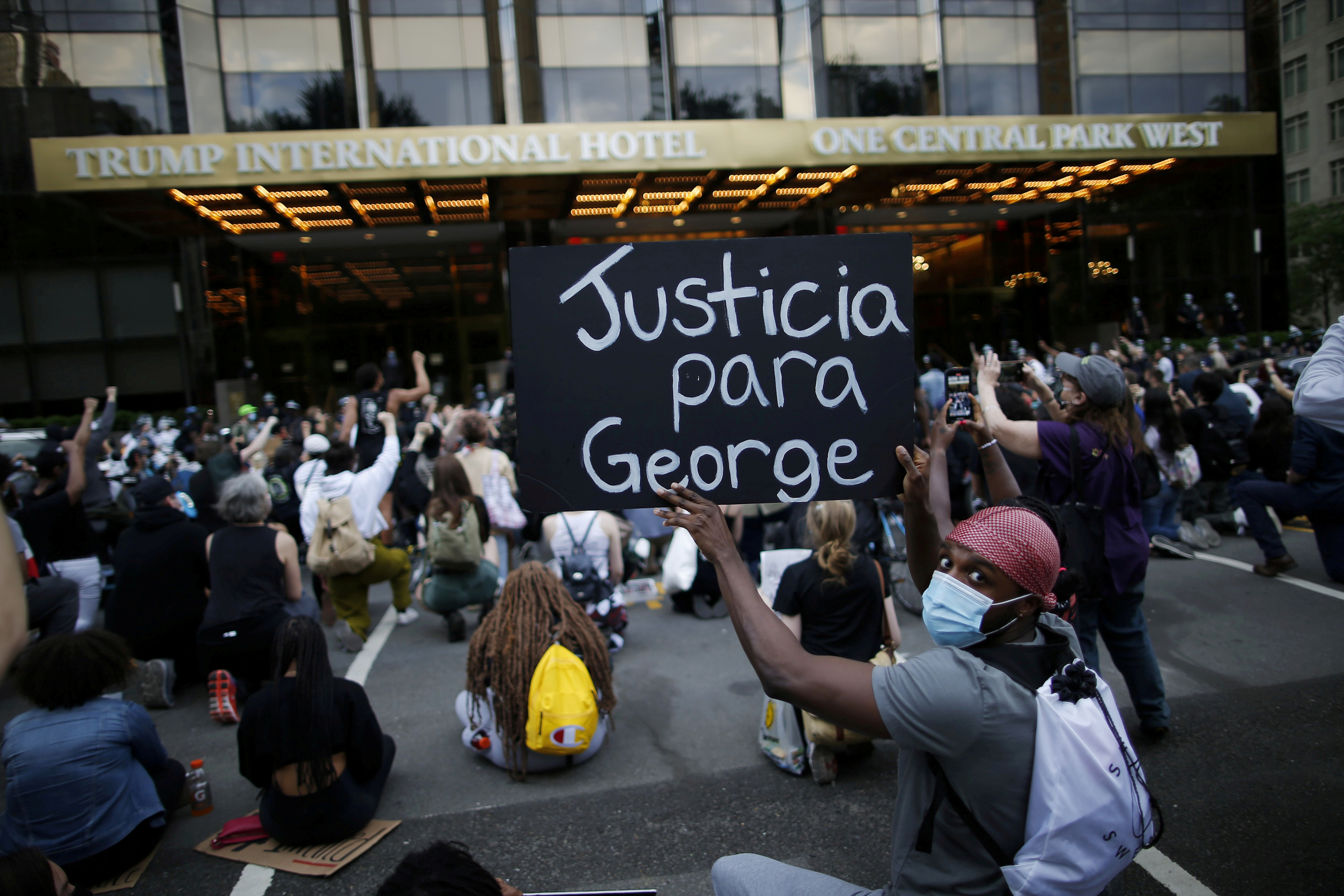 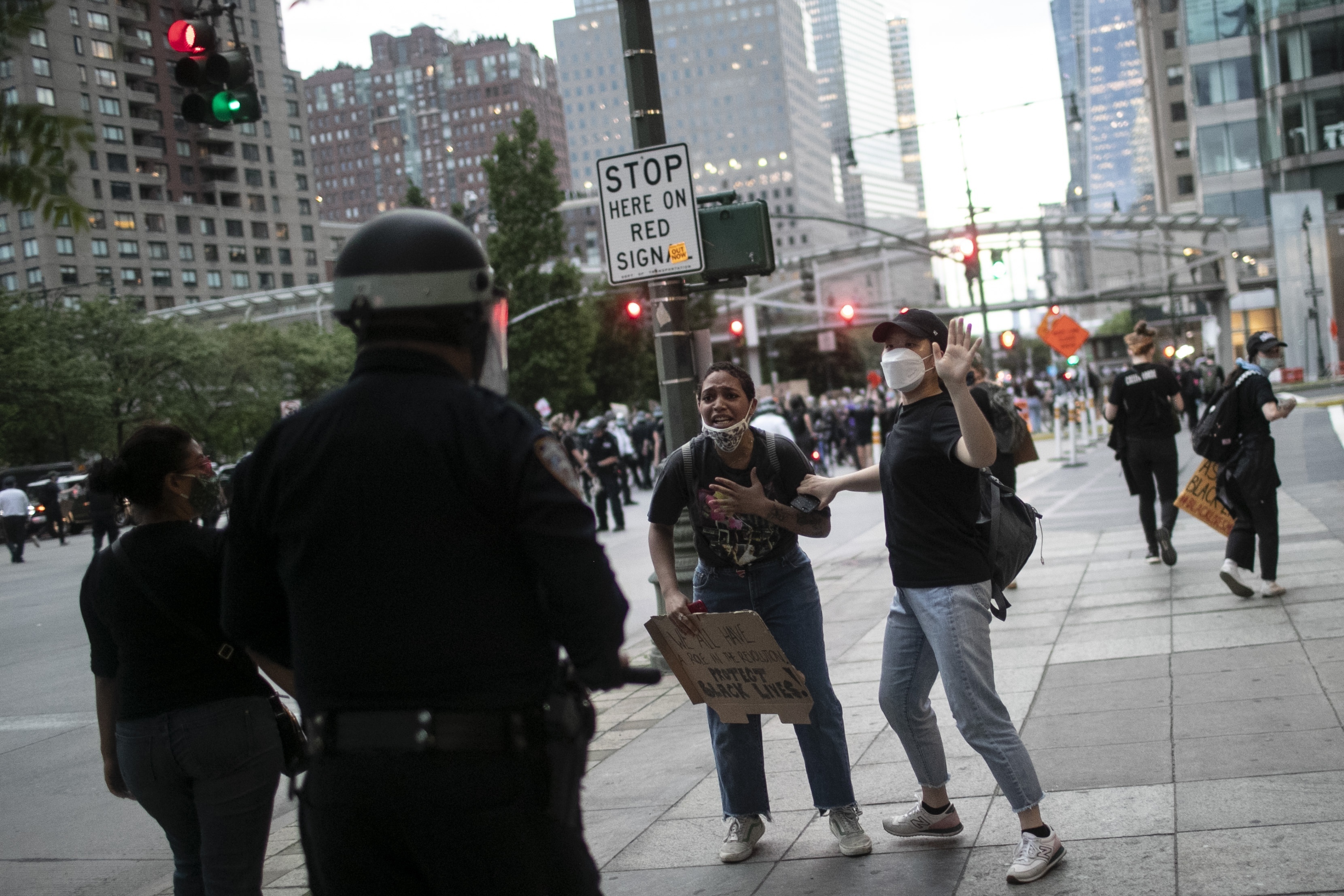