Toddler pulled alive from rubble 65 hours after earthquake in Turkey

A three-year-old girl – her tiny frame wrapped in a foil blanket, her face and hair caked with dust – wrapped her small hand around the gloved thumb of a rescue worker and looked into his face with wide eyes.

Moments earlier, the child, Elif Perincek, had been pulled to safety from the rubble of her home, 65 hours after her apartment building collapsed in Izmir, Turkey, when a devastating earthquake rattled the city, killing scores of people and flattening structures and residential buildings. 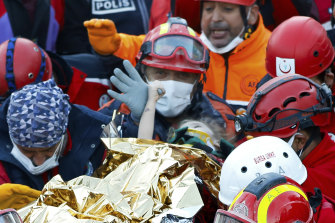 Elif Perincek clings to the thumb of a rescue worker after being pulled from the earthquake rubble in Izmir, Turkey.Credit:Istanbul Fire Authority via AP

Dozens of emergency workers who had worked around the clock to wrest her from the tangled debris applauded as she was carried in a winding line, through slabs of crumbled concrete, and into a waiting ambulance.

Muammer Celik, the firefighter whose finger Elif clung to as she was lifted to the ambulance, told the Turkish news outlet NTV that finding the child alive was "a true miracle".

"There was dust on her face; her face was white," he said. "When I cleaned the dust from her face, she opened her eyes. I was astonished."

She clung to his hand throughout the rescue operation, he said, adding that firefighters had never given up hope that they would find her alive. 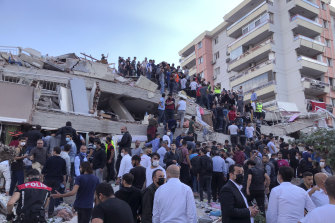 Rescue workers and residents try to rescue people trapped in a collapsed building in Izmir, Turkey, immediately after the earthquake struck.Credit:AP

Nearly a thousand people were injured in the quake, which had a magnitude of 7.0. It was centred in the Aegean Sea, north-east of the Greek island of Samos, where two teenagers were killed when a wall collapsed.

The quake was felt across the region, but the worst of the devastation was centred in Izmir, about 320 kilometres south-west of Istanbul, Turkey's third most-populous city, a centre for tourism and industry that is prone to earthquakes.

Rescue workers have been racing against time in the days since to free the dozens of people initially believed to be trapped by the quake. Operations continued at eight buildings on Monday, Turkey's disaster and emergency management authority said in a statement.

The death toll reached 85 after rescue teams found more bodies overnight amid toppled buildings in Izmir. But at least 106 people have been rescued from the rubble since Friday, the state-run news agency Anadolu reported on Monday.

More than 7800 search-and-rescue personnel alongside 25 sniffer dogs and heavy machinery were deployed by the disaster management authority, local agencies and non-governmental organisations to aid in the response. Temporary housing has been set up for the thousands of people displaced by the earthquake.

Elif was not the only person to survive the collapse of her apartment building in the Bayrakli neighbourhood: Her mother and two of her siblings were also pulled alive from the rubble on Saturday, when rescuers first tunnelled in. Another sibling did not survive.

Rescue workers continued on, digging through the debris around the clock for another two days, determined to find Elif.

"God, thank you a thousand times," Mehmet Gulluoglu, who leads the disaster and emergency management authority, wrote in a Twitter post early on Monday as news broke of Elif's rescue.

Fahrettin Altun, the Turkish President's communications director, in a post on Twitter, thanked rescue workers for their "extraordinary effort" in bringing the girl to safety.

Hours earlier, elsewhere in Izmir, another girl was also rescued, the disaster and emergency management authority said. The Anadolu news agency identified her as Idil Sirin, 14, and said she was given first aid and taken to a hospital.

alive, from, pulled, rubb, Toddler
You may also like: