Too young to buy a pint…but you can apply to be a PC: Police lower recruitment age to 17 to meet pledge of adding an extra 20,000 officers

Teenagers as young as 17 can now apply to become a police constable – although will have to wait a year before doing the job.

The change means people too young to buy a pint can put themselves up for enforcing the law.

Rules were altered earlier this year in a drive to improve recruitment figures for the force.

The idea is to target school-leavers before they get attracted by other fields of work or employees.

New recruitment guidance states: ‘Candidates aged 17 and above may apply to become a police officer and may take up appointment on reaching the age of 18 or above, if successful.

‘There is no upper age limit for applying to the police service, but bear in mind that the normal retirement age is 60 and that new recruits are required to undertake the required probationary period. 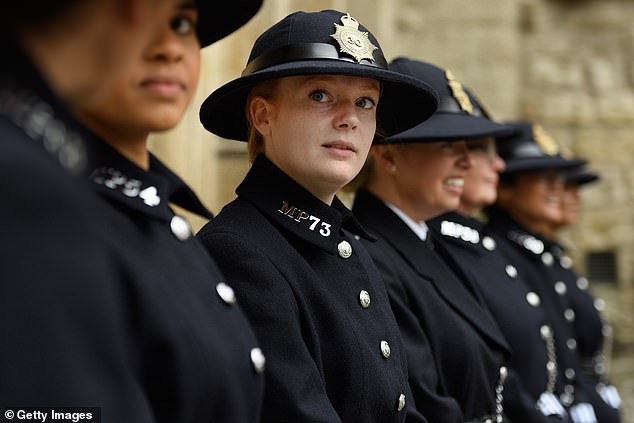 Serving police officers from the Met at Westminster Abbey, ahead of a special service

‘For the Police Constable Apprenticeship Degree this is three years and for the Degree Holder Entry Programme this is two years.’

The government has promised to recruit 20,000 new officers as part of the Conservative Party’s general election campaign.

But challenging conditions of the coronavirus pandemic has meant it has been difficult to attract candidates in every sector, let alone policing. 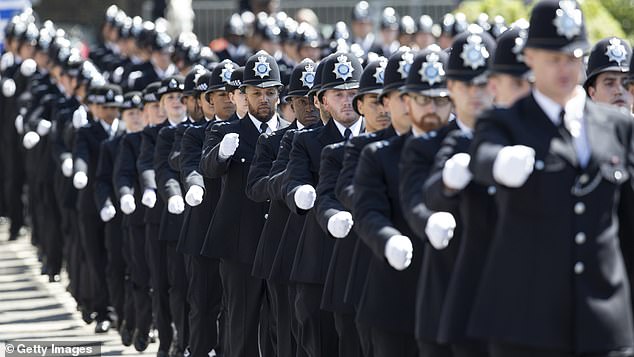 Would-be police officers have to have their financial status verified and those with outstanding County Court judgements, or bankrupt, are rejected.

Any recruits will have to undergo a medical examination to ensure that you meet standards as well as have a fitness test.

Eyesight is also important and has to be of a sufficient level.

Tattoos on your face, neck, head or hands are not allowed but can be in different areas, depending on the role.

The police service strictly prohibits any of their officers or staff from becoming members of organisations whose aims and objectives may contradict the duty to promote race equality.

College of Policing board minutes from March this year said: ‘The Committee noted the update on the proposed amendment to Regulation 10 around the age requirement for appointment to a police force – to allow applications from candidates under the age of 18 years in order to take up appointment on reaching the age of 18 years.

‘Members acknowledged the importance of the regulation changes, which they felt would help to widen the recruitment pool and agreed that this was a direct ask from Chief Constables who felt that they were being disadvantaged in the recruitment pool compared to other organisations who promoted their apprenticeships schemes particularly to school leavers.’

He said: ‘While it can be a challenging job with long and antisocial hours, police officers enjoy a unique sense of social responsibility, trust and respect as well as a relatively attractive pension.

‘But with our data suggesting some jobseekers may need some convincing, it remains to be seen if the government’s high-profile plan to boost the police ranks will spark a renewed wave of jobseeker interest.’