Tories demand an end to cycle lane chaos: Road restrictions brought in during the coronavirus pandemic should be scrapped, MPs say

Cycle lanes and road restrictions brought in during the pandemic should be scrapped, Tory MPs have told the Transport Secretary.

In a letter to Grant Shapps seen by the Daily Mail, 14 backbenchers warn that disastrous anti-traffic measures are worsening gridlock and pollution and causing ‘palpable anger’ across the country.

They say the Conservative Party is engaged in a ‘war on the motorist’ and describe the Department for Transport’s coronavirus roads policy as ‘indefensible’. 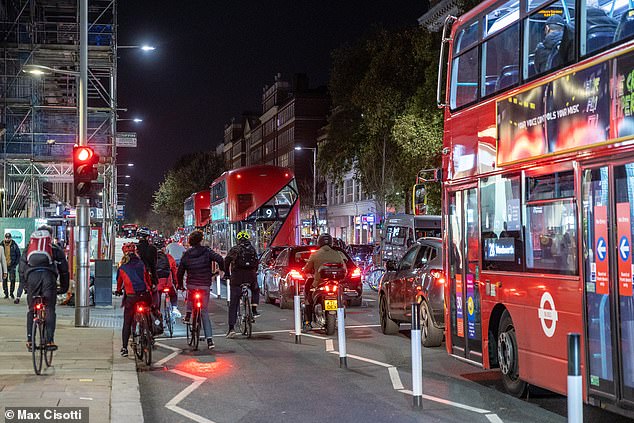 Cycle lanes and road restrictions brought in during the pandemic should be scrapped, Tory MPs have told the Transport Secretary

The letter, organised by pressure group FairFuelUK, exposes a mounting Tory revolt over the DfT’s £250million fund for traffic schemes during the pandemic.

Under the controversial policy, councils have used taxpayer cash to turn over vast sections of road to pedestrians and bikes. In some cases, roads have been closed altogether to create ‘low traffic neighbourhoods’ in busy residential areas.

Rather than improving local areas, critics say, the schemes have worsened gridlock and pollution, caused delays for 999 services and hurt businesses which rely on trade from passing traffic. Astonishingly, some of the most chaotic schemes have been ripped out after as little as 48 hours.

The measures have so far cost £400,000 a day. In a move likely to ignite fresh anger, Mr Shapps will this week release a further £175million to councils for new road schemes. But in a partial U-turn, he will say they cannot proceed with schemes unless they can prove they have the support of residents, businesses and the area’s MP. 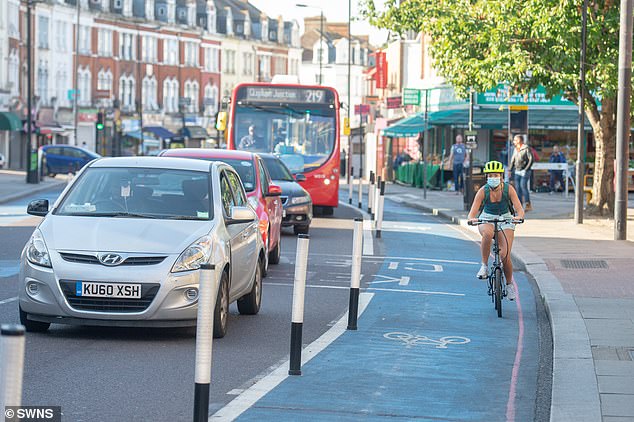 The letter, organised by pressure group FairFuelUK, exposes a mounting Tory revolt over the DfT’s £250million fund for traffic schemes during the pandemic

Motoring groups have spent weeks campaigning against the measures, but the intervention by Tory MPs marks a significant turning point in the row. The MPs’ letter to Mr Shapps, written by Tory MP Craig Mackinlay, says: ‘The extra £250million being spent on these projects is simply a high-priced idealistic formula for even more congestion and the associated increased pollution that comes from resultant slower moving or stationery vehicles.

‘This policy is indefensible, with our constituents up in arms at seeing high streets desolated, small businesses ruined, and emergency services impeded. With only 4 per cent of road journeys by bicycle, the over-emphasis on cycling initiatives and their influence on policy is counterproductive, both economically and politically.’

An, cycle, Demand, End, to, tories
You may also like: